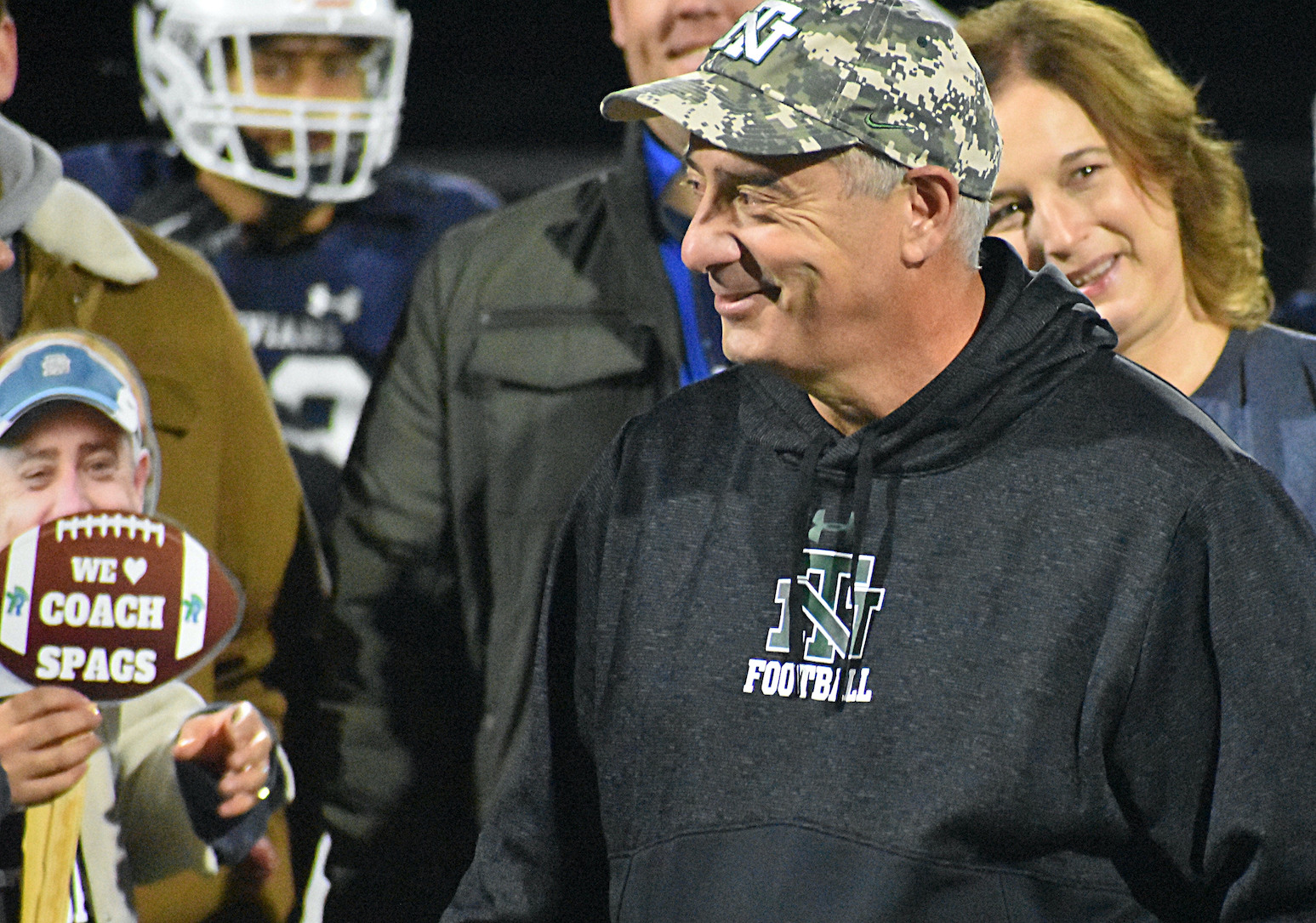 Bob Spagnoli isn’t a center-of-attention type of guy, but the spotlight was unavoidable Oct. 23 on New Trier’s Robert Naughton Field.

Spagnoli’s friends, family and colleagues gathered at midfield for a pregame ceremony honoring the 32-year Trevians football coach and teacher who is retiring after the school year.

The event was led by New Trier head football coach Brian Doll, as “coach Spags” was presented with an encased NT football helmet and piece of wooden wall art.

“It was very humbling,” said Spagnoli, the team’s running backs coach. “And it was certainly unnecessary. I certainly don’t want to be a distraction. I’m a team guy and the last thing I ever wanted to be was the center or focus of any type of celebration.

“My family being there to celebrate — and friends along the way to be there — meant more to me than anything. … It really wasn’t necessary, but it was appreciated.”

Spagnoli has remained the head track coach for all 32 years — the longest tenure of any Trevians head coach. But for most of his time with New Trier football, he coached defensive and offensive linemen. Spagnoli moved to running backs coach in 2008 under coach Matt Irvin.

In the classroom, Spagnoli was equally versatile. He taught kinetic wellness and applied arts, such as driver’s ed, wood and metal working, and even real-world cooking.

“He was truly a jack of all trades,” Roth said. “They put him wherever. He always seemed to know something about everything. He always had a story to tell.”

While he still enjoys his work, Spagnoli said he is “more than happy to retire.”

“New Trier has been such a wonderful place to teach and coach. I’ve told people that for 32 years,” he said. “It’s quite possibly the greatest high school in the country. You’re never going to find greater students, student-athletes, families or a greater place to work.”

The teaching and coaching bug bit Spagnoli while he attended Niles West High School, where he played football under coach Bill Richardson, an Illinois hall of famer.

Spagnoli credits Richardson for inspiring his career path and the two — along with Spagnoli’s brother, Chuck, the head football coach at Lake Forest High School — remained friends until Richardson died in 2020.

“He is one of the most influential people you want to have in your life,” Spagnoli said. “… He was a great influence on young men. I knew growing up that I wanted to teach and I wanted to coach, and he was one of the main reasons why. … He was more than a coach.”

After Niles West, Spagnoli attended and graduated from Illinois State University. His first job out of college was as a teacher and assistant football coach for Notre Dame College Prep in Niles.

There, he was mentored by none other than Mike Napoleon, the longtime baseball (head varsity) and football (offensive coordinator, varsity) coach at New Trier.

Napoleon said he showed Spagnoli the ropes of teaching physical education and leading a department. The two also were together on the Dons’ football staff and even coached and taught Augie Fontanetta, who is now New Trier’s athletic director.

Spagnoli soon left for Morton High School in Cicero for one year before New Trier, while Napoleon eventually moved on to Providence Catholic in New Lenox.

“While he was at Notre Dame, we became close friends,” Napoleon said. “He went to Morton and I went my way, but we kept in touch.”

The connection was key to Napoleon landing the baseball gig at New Trier in 1996, when Napoleon said Spagnoli was pushing the athletic department to land Napoleon. The friends have coached on New Trier’s varsity football staff ever since.

Spagnoli has been a consistent, likeable and motivating force for the Trevians, Napoleon said — and he’s quotable too.

Napoleon said the program set out to make a shirt with Spagnoli’s top sayings — such as “Nobody walks but the mailman,” “Let me ask you a question,” and “Let’s use simple math” — but there were so many that they had to make two.

Napoleon is going to miss Spangoli on the sidelines, but knows the Trevians student-athletes will be missing more.

“He’s a motivator,” Napoleon said of Spagnoli. “He speaks to kids at a great level where they look at him, respect what he’s saying and he gets them excited to be there. Though he may get on kids, they love him at the end of the season. That’s just his nature; it’s a friendly nature. They have the utmost respect for him.”

Roth said Spagnoli is among a “dying breed” of football coaches who will be missed. He expected a lot from running backs like Roth, but the hard work paid off on the field.

“He always strived for perfection,” Roth said. “We’d do our warmup seven times in a row if someone took a wrong step. It created a plethora of skills that I value now, like paying attention to detail.”

Spagnoli’s favorite memories of the past three decades include beating Maine South for the Central Suburban League title in 2016; and watching former players succeed on the next level, such as Matt Kaskey in the NFL and Michael Vincent with Notre Dame in college football.

While Spagnoli won’t take any credit for those successes, he said he was glad to help in any way he could.

“It’s just all so awesome. To say you had an eensy teensy part of that kid’s life, that’s pretty cool,” he said.

He also doesn’t take too much credit for his own career, thanking people like Naughton, his fellow coaches, former players and his family — especially his wife, Cathy, whom he called a “rockstar.”

“She’s really the mortar that holds all the bricks together in our house,” he said. “I could never have had the career and the time commitment I put in without her.

“I just want to thank everybody that has helped me along the way, all the former guys and gals I’ve coached with or taught with,” he added. “ .. I keep using the term humbling. I don’t know if there is a better word. I can’t think of one. It really truly is. I appreciate my wife, my kids and everything they’ve sacrificed along the way because they have sacrificed.”