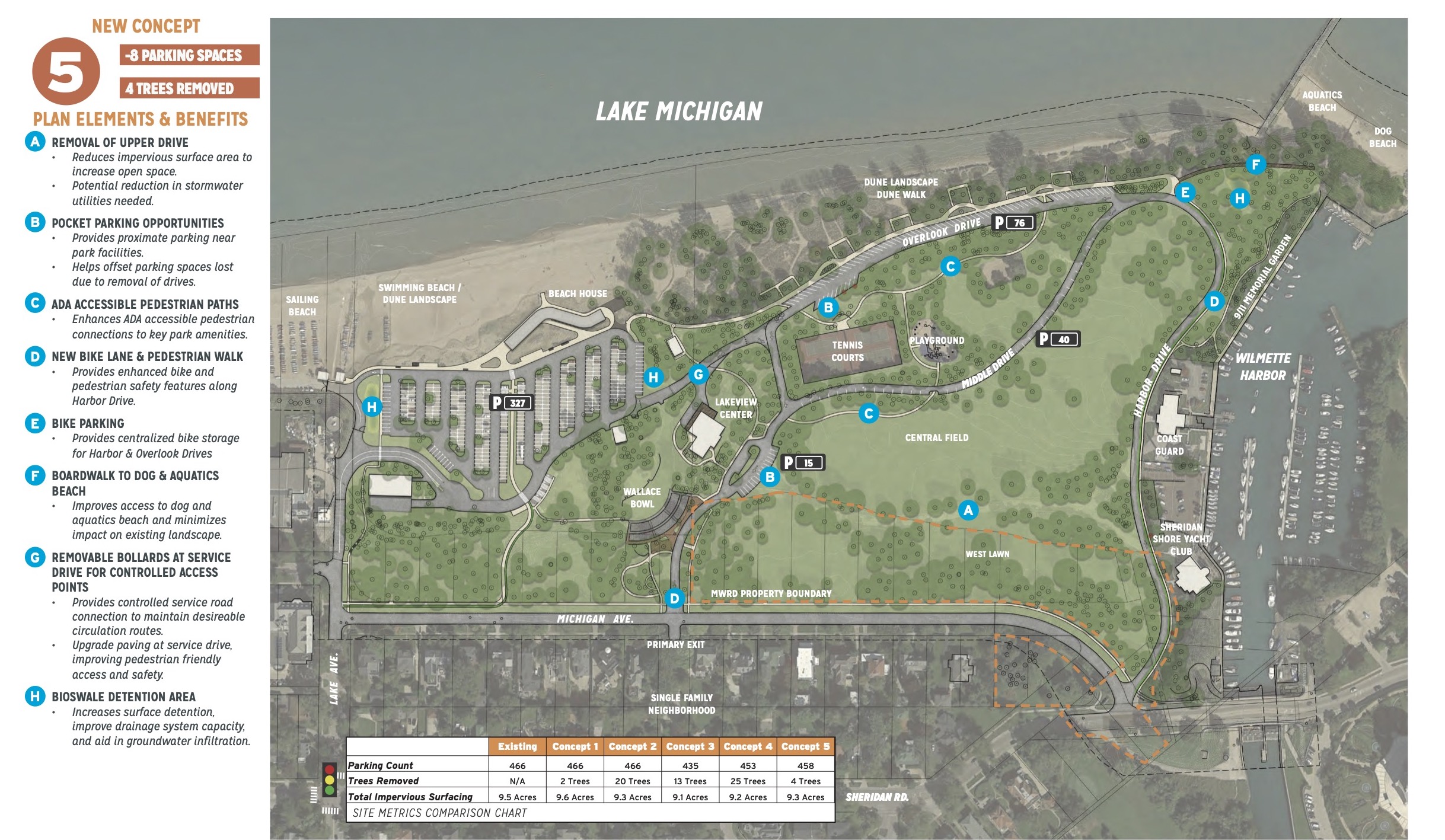 Plan 5 — a new version of Gillson Park improvement concepts — was presented at the Park Board meeting on Monday, Nov. 8.

While the Wilmette Park Board had hoped to narrow down the proposals for the Gillson Park Comprehensive Plan at its regular board meeting on Monday, Nov. 8, board members ended up sending all the proposals back to the consultants, requesting a cost analysis for all the plans and concepts.

At a September meeting, the Park Board heard four proposals from the Lakota Group representing scaled-back ideas than what were initially presented over the summer.

The honed concepts are the latest step in the plan process that began in late 2020, was originally set to end by the summer and is now hoping to be complete before 2022.

Since the September meeting, the district hosted three community listening sessions, during which about 70 people shared their thoughts on the proposals, officials said. An accompanying survey reportedly never materialized.

Andy Tinucci, principal at Woodhouse Tinucci Architects, went over the feedback for each individual plan, while also introducing a fifth plan, which was presented to the board for the first time at its meeting Monday.

Tinucci said that plan was the result of community feedback, taking their ideas and suggestions and combining them to form the concept.

Plan 5 calls for keeping Middle Drive, while removing Upper Drive — two roads that wind through Gillson Park. It keeps the entrance to Gillson Park as is and adds a sidewalk along Harbor Drive for additional safety, while directing traffic eastbound, past Lakeview Center and onto Michigan Avenue.

The removal of Middle Drive has been an issue with some residents, who say its utilized as a walking path and that vehicles don’t use it.

Tinucci said Plan 5 creates the biggest continuous amount of open space, and added that the layout calls for a net loss of eight parking spaces and four trees.

He also highlighted the four previously introduced plans and highlighted community response from them.

The first plan, which Tinucci said “leaves the majority of the park in place,” was the most popular among community members. The most notable change is adding a bike lane to the park.

Plan 2 calls for the removal of Middle Drive and the relocation of Upper Drive so that it is no longer part of the Metropolitan Water Reclamation District. Tinucci said the community questioned whether this was a smart use of money.

Of all the plans, Plan 3 reportedly drew a mixed response. It features the removal of both Middle and Upper drives and creates a large contiguous green space, but also eliminates 30 parking spaces and 13 trees. Tinucci said those who responded said Upper Drive is used for parking and would be an overall loss to the park.

Tinucci said Plan 4, which was the “most complex” of the plans, was also the “least well-received plan.” It calls for one-way traffic throughout the park, a new entrance at Sheridan Road and Michigan Avenue, a drop-off zone for the yacht club and an exit onto Michigan Avenue.

Respondents were concerned that it would cause traffic issues and questioned the removal of the Michigan Avenue exit.

Other ideas for the board to consider included the additions of shelters and bathrooms, as well as making an accessible park entrance at Lake Avenue.

Following the presentation, commissioners spent more than an hour discussing the proposals and what they would like to see included or what they feel should be left out.

Vice President Julia Goebel said she’s interested in any plan that removes middle drive, and added that she likes the idea of having a drop-off option for vehicles near the harbor.

She also commented on ADA-accessibility and said that while she was disappointed that the study that calls for the removal of 30 trees was shown to the public before the board, she thinks alternate options are available.

“I like the notion of having ADA accessibility, not only for those in wheelchairs but also those with strollers,” she said.

Board President Mike Murdock said he believes any plan that calls for the removal of an excessive number of trees is a nonstarter for the board.

Commissioner Allison Frazier stressed that the Park Board is committed to replacing every tree that has to be removed. She wants to work with community members so that they understand that every tree removed, especially those that are dead or dying, will be replaced.

As for the plans themselves, Frazier said traffic is one of her biggest concerns.

“My biggest opposition to the removal of roads is that I don’t want to push more traffic into our parks,” she said, adding that she would be opposed to removing Upper Drive if it causes more traffic problems.

“I don’t necessarily see the benefit of removing Upper Drive if all we’re doing is pushing cars to Middle Drive,” Frazier said. “I don’t like the thought of more cars on Middle Drive.”

Commissioner Cecilia Clarke was also concerned with removing Upper Drive and said she believes the parking space removal will hurt Gillson and not improve it.

Clarke added she has mixed feelings on relocating the park entrance, although it does improve safety.

“I’m not quite sure on moving the entrance to the park,” she said. “I will note that it was one recommendation in the traffic study that a lot of neighbors requested from the village.”

Clarke also said while the village will replace any tree that’s taken down, there are also concerns with that.

“Even though we’re replacing trees, replacing a tree with a smaller one isn’t really the same thing,” she said. “I know that’s something we’re going to be doing but I think there’s concerns.”

Commissioner Kara Kosloskus said she likes the ideas presented in Plans 2 and 5 and said infrastructure efforts will help her decide whether removing Middle or Upper drive is a better option, especially if one needs more work done to it.

She also liked the idea of turning Middle Drive into a dedicated walking path.

“It’s still a nice walking and strollering path that connects through, but it doesn’t need to be vehicular,” she said.

Commissioner Lindsay Anderson said she would like to see a cost analysis with regard to moving or removing any of the roads.

“It’s great that we have so many options to look at how we can better move cars and people,” Anderson said. “I think it’s important to continue to keep that option on the table.”

She added that, after seeing how much work would have to be done to install bathrooms at Gillson, she would be in favor of not considering that option.

Commissioner Patrick Duffy said not having financial numbers makes the decision-making process difficult; though, he likes the first plan, which is the least-expansive plan.

“In a way, less is more,” he said. “The park remains the same. We’re not changing its view as you walk in dramatically. We’re not cutting down trees because we’re removing a road.”

Duffy added that one major concern among the public is the removal of memorial trees. He suggested that the village look at other options for memorializing people, since he said many people might not realize that trees don’t always live forever and might have to eventually be removed.

Murdock requested the cost analysis before making any decisions and said that none of the plans, at this point, are being taken off the table, as there are aspects of all plans that are both positive and negative.