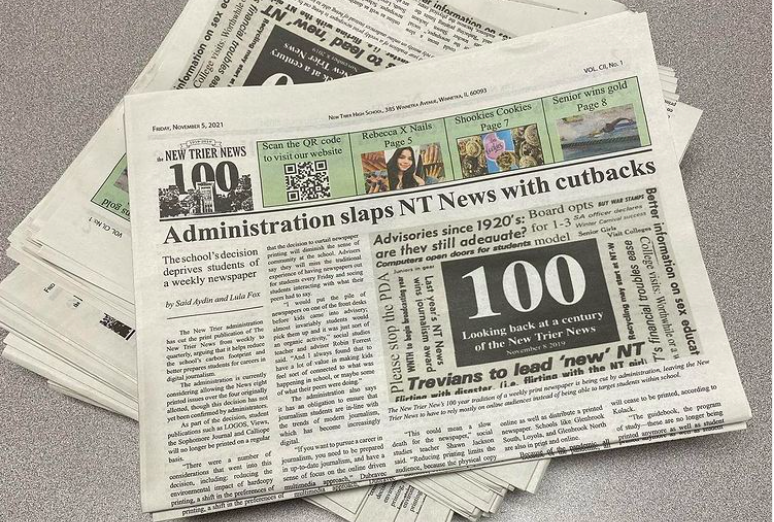 The century-old New Trier News is going digital for a vast majority of the year — in news first reported by the student newspaper.

New Trier High School administration told the school’s long-running weekly it can publish quarterly — four issues a year — going forward and must focus on digital publication, according to Niki Dizon, the district’s director of communications.

“We’re taking a curricular approach and talking about teaching journalism in a way that it is very likely to be taught in college and the real world,” said Dizon, who is a former Associated Press reporter. “Reporting more breaking news, news as it happens, including video and social media, all of those things.”

The weekly New Trier News is more than 100 years old, publishing its debut edition in 1919, according to the paper’s website.

In a staff editorial, the News wrote, “Although journalism as a field is becoming more digital, we believe that at New Trier, the print issues are necessary for sharing stories and building unity among the student body at both campuses. Naturally, if there is a copy of the newspaper in advisery, students will engage with the material. Publishing articles strictly online will reduce readership since many students don’t yet know the newspaper continues to exist online or how to access it.”

Dizon said the decision to cut back also was made with environmental impacts in mind, and the strategy also will affect other school publications, such as LOGOS, a literary magazine of poetry, essays and other creative writing; Calliope, a visual-arts publication; the Near True News, a satirical product; and others.

Often, she said, school officials would find unread and still-bundled copies of the New Trier News in school hallways.

The cutbacks, though, are not fiscally based, Dizon said.

The New Trier News distributes thousands of copies across both campuses (Northfield and Winnetka) each week. Dizon said the printing costs on average $35,000 a year.

She said the move to a digital focus will meet “stakeholders where they consume the news.”

“That’s certainly online and so that was what we were looking at,” Dizon said.

The New Trier News is dropped in the school’s advisery classrooms every Friday and the large distribution builds community and audience in the halls of New Trier, according to Aydin, who is the paper’s opinions editor and the co-author of New Trier News’ report on the cutbacks.

“It helps us increase our audience,” he said, of the print version. “The audience on the website and the physical product is different. … The paper targets students who see it every week.”

Aydin, who participated in a summer journalism workshop from The Record, said the New Trier News has had trouble attracting students to the online version at NewTrierNews.org.

NT News Editor in Chief Grace Yoon said the newsroom faces a challenge in marketing the website to their classmates, but the efforts have already started.

The school year’s first print version of the News was distributed on Friday, Nov. 5, and it featured a number of prompts pushing readers to the website.

“We were disappointed at first with the news, but now we’re really trying to use this to build our online presence,” she said. “The administration has been very understanding with our disappointment. They agreed to come into the class to see exactly what we are doing with the change.”

Knowing the task at hand, Yoon hopes to guide a gradual and organized transition.

“Obviously we have a lot of things on our plate with a staff of just 10 people,” she said. “We really have to have more structure and divide responsibility. … We want to maintain deadlines and for staff to run efficiently.”

That being said, Yoon is going to miss students popping open the New Trier News every Friday and discussing the content with their peers.

She said an initial loss of student readership is inevitable.

“(Friday) it was very nice to see people walk into advisery and pick up a copy. Even if they don’t read everything, they still open it up and read headlines,” Yoon said. “People are looking at articles and carrying it around the hallways. The student audience (for digital) will be low at first, but that is something we’re going to have to change up.”