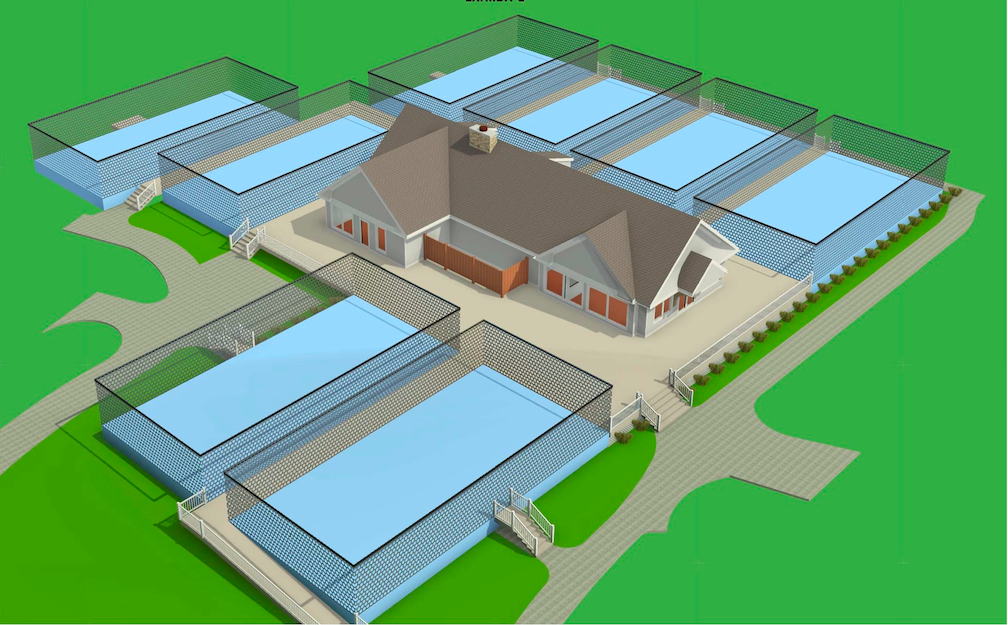 The additional courts will be built to the west of the current paddle hut, which is also slated for expansion. | Image from DDCA Architects

Winnetka’s platform tennis expansion plans got a game-clincher this week.

The Winnetka Village Council on Tuesday, Nov. 2, OK’d a proposal that will add two courts and expand the paddle hut at the Winnetka Platform Tennis Club at the Skokie Playfields campus.

The project, which has been in development for three years, hopes to break ground in the spring of 2022.

The new courts will be Nos. 7 and 8 for the Winnetka Platform Tennis Club, which was established in 1978 with two courts off Hibbard Road. Over time, more courts were added, and the current paddle hut and two newest courts were constructed in 2004, after the Village amended the club’s special-use permit.

Club President Colin Cross told the village council on Nov. 2 that the club has grown by more than 90 percent — from 240 to 460 members — since 2014, prompting the need for more recreation space.

“We really need these courts,” said Cross, adding that the additions will make the Winnetka Platform Tennis Club the largest public paddle-tennis facility in the country.

The courts will extend to the west of the paddle hut and overtake the smaller practice green belonging to the Winnetka Golf Course. The project, which will be done in two phases, plans to remove eight trees, including a 24-foot shagbark maple and a 21-foot sugar maple.

The paths that lead from the complex’s rear parking lot toward the golf course’s driving range will be replaced by a continuous path around the new platform tennis courts.

The paddle hut additions — construction of which is designated as Phase 2 and will not begin for at least two years, according to village documents — will allow for more gathering and activity space for the growing club.

The entire project is estimated to cost just shy of $900,000 — $390,000 for Phase 1, the court and decking additions; and around $500,000 for Phase 2, the paddle hut additions. The funding is the responsibility of the Winnetka Platform Tennis Club, which fundraises to support is growth.

The plans made their way through the Winnetka Park District Board of Commissioners and required village approval because of zoning conflicts on the subject property.

The village review process began in September, and the proposal collected support from the zoning board of appeals, plan commission and design review board prior to reaching village trustees.

On Nov. 2, Cross and the park district answered a handful of questions from the council, which was quickly satisfied with the responses and voted to expedite the process and approve the proposal on the first read.