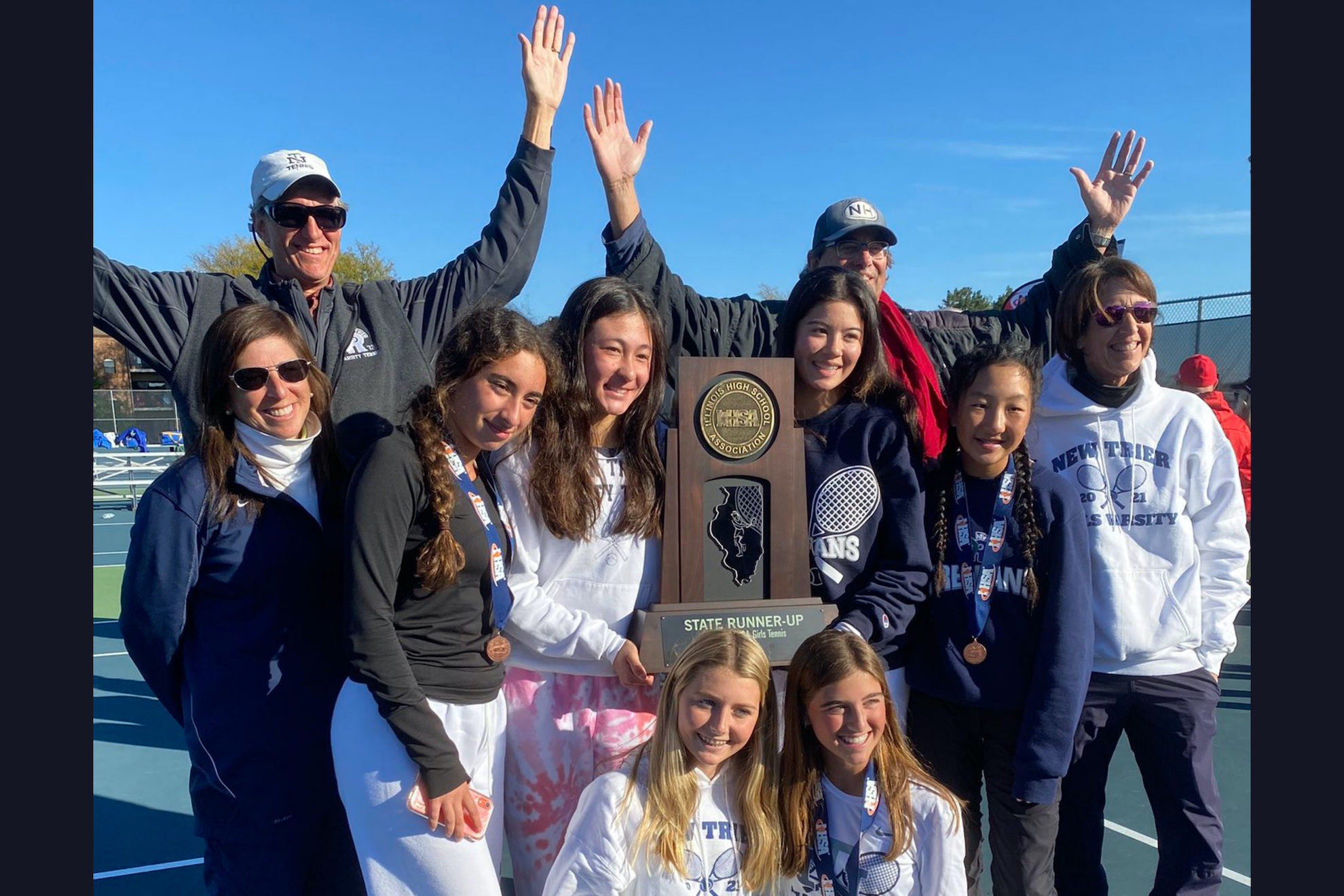 In many situations, rebounding from a tough loss is about pride. But not at the state tennis tournament.

During the state championships, wins in the consolation bracket again became a deciding factor in the team scoring from Thursday-Saturday, Oct. 21-23, in Chicago’s suburbs.

New Trier’s eight backdraw wins, including Madison Liu’s fifth-place victory, clinched a trophy for the Trevians, whose 26 points landed them in second place, along with Lake Forest and Stevenson. All three of them finishing behind a dominant Hinsdale Central (36 points).

“It is so big for the kids to be able to learn why that is so important,” Trevs coach Jerry Morse-Karzen said of the backdraw. “Ok, so you lost a tough one and are bummed about it, but how do you bounce back.”

Liu, a sophomore, finished her fifth-place run with a 6-3, 6-2 victory over Margaret Forkner, of Libertyville High School, on Saturday, Oct. 23, at Buffalo Grove High School.

The win earned one point and locked the Trevs in trophy position, but the rest of the tournament had to play out before New Trier knew whether that was second or third.

“We knew we had a trophy, but it kept you on the edge of your seat until the very end,” Morse-Karzen said. “Lake Forest could have gotten second all by themselves — or they would have gotten fourth. There were a lot of scenarios that were very exciting. We didn’t know what was going to happen.”

All four New Trier entries — Liu and Julia Ross in singles, and Keira Botjer and Coco Zabel and Lucy Parrilli and Keri Rothenberg in doubles — picked up two wins apiece (4 points) to start their tournaments.

New Trier’s other singles entry, junior Julia Ross, put her team in great position by opening with a 6-1, 6-4 upset of Forkner before picking up a second-round victory as well.

“Julia Ross started us off. She lit the fire in a sense with that first-round win,” coach said. “She had a tough draw, but matches get decided on the court. She went out and was tough.”

After their two wins, Botjer and Zabel ran into Whitney Young’s Jayna Dunwoody and Jenna Stevens, who took third overall, losing 6-2, 6-3, and Stevenson’s Ainika Hou and Sonia Mehta, the fifth-place finishers, in their first backdraw match.

Parrilli and Rothenberg had the most competitive tournament, as three of their seven matches went to a third set.

After suffering a tough 4-6, 6-4, 7-5 third-round loss to a Glenbrook South duo, Parrilli and Rothenberg fought for four straight victories in the backdraw. The run included a 2-6, 7-6(5), 10-8 victory over a pair from Hinsdale Central and a 6-4, 7-5 win over a Palatine tandem to reach the fifth-place match.

In the final match, Hou and Mehta, of Stevenson, outlasted Parrilli and Rothenberg 5-7, 6-4, 6-4, as the New Trier pair finished with five wins and eight points.

“The backdraw was huge,” Morse-Karzen said. “We had 18 points after a day. As the tournament goes along, it gets much more difficult to get more points as you advance. We got  more points after that, which was great. It turned out to be just enough.”

“We always go into a tournament wanting to win, but we knew in the back of our minds that Hinsdale (Central) was pretty loaded and it was going to be a tough hill to climb. Second was a real nice achievement.”

The second-place finish was the Trevians best result in 11 seasons. They also took second in 2011 and earned four third-place trophies from 2012-2019.

New Trier’s most-recent of their eight state championships was in 2004.

The Trevs will give it another go in 2022, when Rothenberg, Parrilli and Zabel will be sophomores, Liu a junior and Ross a senior. Botjer is the only graduate from the state lineup.

“This was a real good year and a real good way to end it, for the team we had and as young as we are,” Morse-Karzen said.