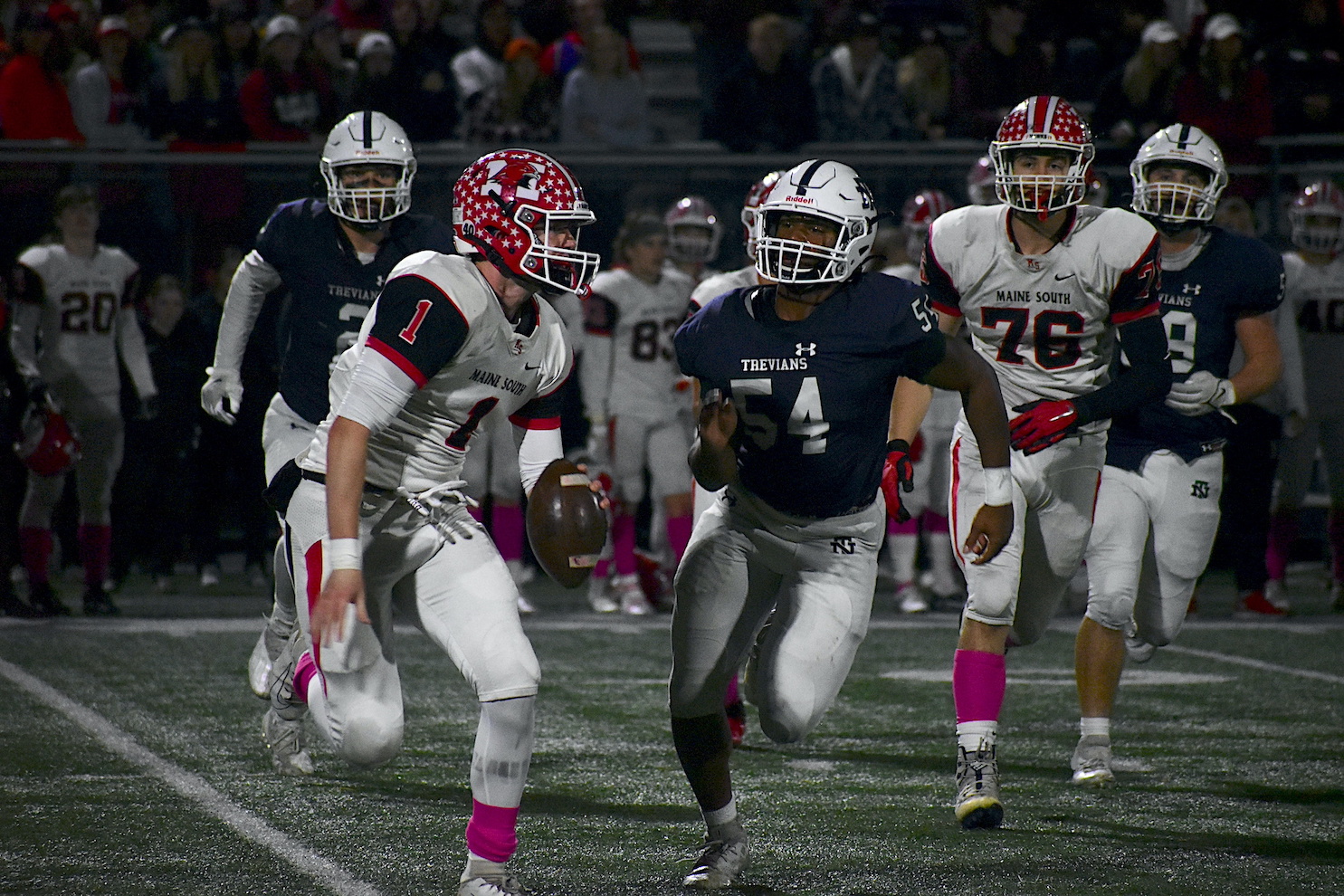 Maine South had run up a 42-14 lead on New Trier early in the third quarter. When the Trevs corrected course, senior Alex Mendes looked back to the scoreboard and it wasn’t as ugly.

“I remember, me and (junior linebacker) Henry Wolfe looked at the scoreboard and it was 49-28 and we’re like, ‘This would be crazy if we came back,” Mendes said.

The Trevians will have another chance at the Hawks, as their playoff fates again drew them together in the opening round of the IHSA Class 8A tournament. Maine South (8-1) will host New Trier (5-4) at 7 p.m. on Friday, Oct. 29.

Trevians coach Brian Doll called it “unfortunate” that common foes can meet each other again so soon, but understands it is the product of an objective IHSA system that ranks teams by win-loss record and then opponents’ wins. He said New Trier will be ready for a “second chance” and are happy to return to the playoffs after their cancellation in 2020-21 and missing the opportunity in 2019.

“Unfortunately, the state allows for it. … It’s not ideal, but we’ll live with it and move forward,” he said. “It makes preparation a lot easier.

“We’re excited to be in the playoffs this year. We know it’s a tough opponent and we know them very well. We’re taking the angle that we got a second chance to play them.”

On Friday night, Maine South scored on its first two possessions before the Trevians straightened things out.

New Trier quarterback Nevan Cremascoli found Josh Kirkpatrick to make it 14-7 and later Mendes to make it 21-14. In the wake of each score, the Trevians were able to get the ball back with a chance to tie but could not threaten the Hawks.

In the half, New Trier had two punts blocked by the Hawks, who turned both into touchdowns en route to a 28-14 halftime lead.

Out of the break, the Hawks took quick advantage of two more New Trier miscues — a muffed kickoff and a fumble on a rushing attempt — to score two more times.

Up 42-14 early in the fourth quarter, Maine South began to pull its starters.

“We noticed,” Mendes said. “We said take that as an insult and we had an opportunity against less experienced players.”

The Trevians scored on three of their next four possessions, while allowing just one Hawks touchdown to trim the lead to 14 — 49-35 — with five minutes to go.

New Trier recovered an onside kick but could not take advantage; however, its defense stepped up and forced a fumble that Dre Birmingham recovered with a minute and 22 seconds left.

On the very next play, Mendes caught a 26-yard touchdown to make it to a one-possession game.

The Trevs had no luck on the onside kick, but forced a three-and-out, thanks to big tackles by Mendes and sophomore Ty Stringer.

Two completions from Cremascoli to Kirkpatrick helped put New Trier on the Hawks’ 34-yard line with time melting away. With 30 seconds to play, a deep pass was intercepted to seal the Trevs’ fate.

“Overall, it’s a never-give-up mindset,” senior linebacker Henry Wolfe said. “As a team we’ve shown in the past we can get ourselves back in games and we did that right there. We fell a little short but overall we can’t be too upset after showing the fight at the end of the game.”

Wolfe had two sacks and a forced fumble in the first half and a tackle for loss in the second.

Quarterback Nevan Cremascoli completed 24 of 43 passes for a whopping 406 yards and five touchdowns, while running back Jack Cummings had another effective day with 92 rush yards on 23 carries with a score.

The Trevians nearly completed an improbable comeback all the while throwing four interceptions, losing two fumbles and having two punts blocked.

“Right now we’re focusing on next week,” Wolfe said. “Can’t focus on the past; have to look forward and look to our next opponent.”

After his team piled up 42 points on highly ranked Maine South, Mendes thinks New Trier can play with anyone.

“We just have to start fast. We haven’t started fast that often,” he said. “I think if we start fast we can beat any team. Just need to do the little things right. … I think we can do this against anyone. Just stay focused.”