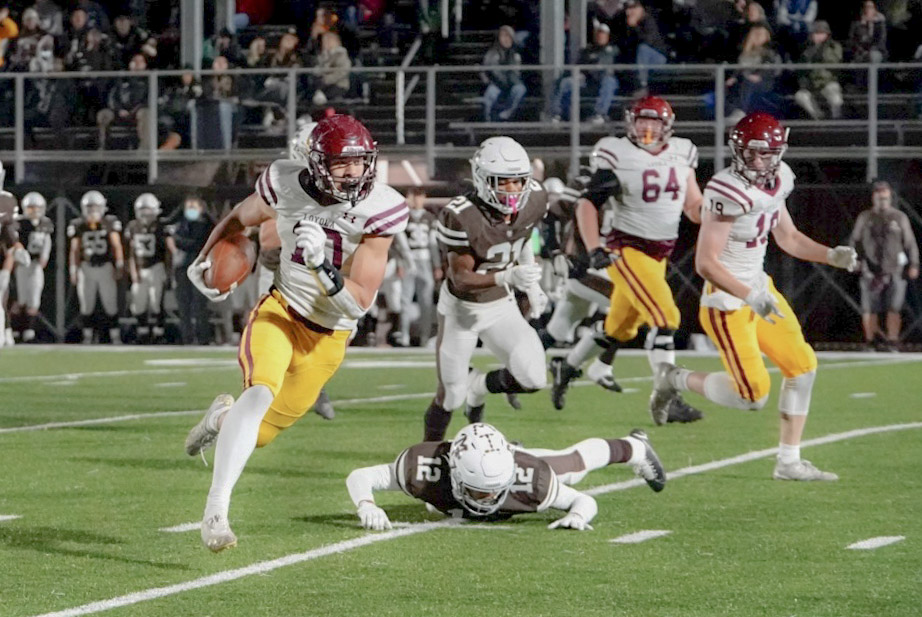 But it had a happy ending.

The Ramblers captured the Chicago/East Suburban Catholic League Blue Division championship outright by surviving a perilous situation in the closing seconds and escaping from Mount Carmel with a 21-19 victory.

Loyola is headed into the state championship playoffs as the No. 1-seeded team in IHSA Class 8A and they will begin their quest for a state title at home on Saturday, Oct. 30, against No. 32 seed Downers Grove South (5-4).

A loss in the regular-season finale not only would have meant sharing the league title with Mount Carmel and Brother Rice but it also undoubtedly would relegated them to a lower seeding in the playoffs.

The Caravan slashed its deficit to two points with 12 seconds remaining on a 56-yard play that saw Dennis Furlong elude the secondary to catch a long pass from Blainey Dowling and take the football to the end zone.

Mount Carmel attempted a two-point conversion, but this time Dowling’s pass to the end zone was incomplete.

When the Caravan used an onside kick in an effort to get the football for a game-ending and game-winning play, Danny Collins grabbed the ball and held on for dear life, enabling the Ramblers to advance to the 8A playoffs flaunting a 9-0 record and a 15-game winning streak that began with an unblemished record in the unprecedented COVID-necessitated spring campaign.

“We almost gave it away,” Holecek lamented after his team emerged victorious for the third time this season in a game that was up for grabs until time ran out. “We made dumb mistakes.

“I am not happy. It feels almost like a loss. There were so many really bad things that were evident.”

He added, however: “There were (also) so many good things that were evident.”

Most notable among the “good things” was the performance of All-State linebacker candidate James Kreutz as he took on added responsibilities as a running back in some situations in the second half.

Carrying the football three straight times Kreutz rammed across the goal line for the touchdown that climaxed a 15-play 80-yard drive (in which Mike Regan, the running back he replaced, carried five times for 37 yards and had a 7-yard pass reception). Michael Baker’s extra point kick following the TD by Kruetz gave Loyola a 14-3 lead in the third quarter.

But the Caravan immediately counterattacked and drove from its 17-yard line to the Loyola 6 before the Ramblers defense put the clamps on. Confronted with a fourth-down situation coach Jordan Lynch called on Louie Chappetto to kick a 24-yard field goal that narrowed the deficit to eight points.

Hoping to catch the Ramblers off guard, the Caravan attempted an onside kick, but Nick Holecek alertly grabbed the football and held onto it when he was immediately swarmed by tacklers.

Early in the fourth quarter the Ramblers launched another offensive.

Starting from their 12 they advanced to their 46. Then, after gaining 5 yards on the preceding play, Kreutz took the ball on a third-and-3 situation and broke through the right side of the line to embark on a 54-yard tackle-busting touchdown run that was followed by Baker’s extra point that increased the Ramblers’ lead to 21-6 with 9:33 remaining on the clock.

The feeling that Loyola was out of the woods was short-lived — it lasted only 28 seconds.

After Jaden Bossie returned the kickoff to his 34, Dowling completed a 35-yard pass followed by a 31-yard strike to Arrington for a touchdown. Chappetto kicked the extra point and it was again an eight-point game, leaving the Caravan ample time to tie the score.

On their subsequent possession the Ramblers penetrated to the home team’s 28 before being held on downs.

Thriving under pressure, Dowling continued to complete passes in clutch situations. It appeared he had connected for a touchdown pass with 2:30 to play but it was nullified by offensive pass interference in the end zone.

Undaunted, the junior quarterback went back on the attack and succeeded in finding Furlong in the end zone for the touchdown that put the Caravan in position for the unsuccessful pass for the extra point that would have tied the score with 12 seconds left in the game.

The multi-talented Arrington also plays quarterback and his presence in the backfield with fellow junior Dowling created problems for the Ramblers because he also was a potential passing threat after having completed 9 of 11 in previous games.

Versus Loyola, he was unsuccessful in his only passing attempt and ran just four times for 6 yards but he caught three passes for 89 yards. Dowling, meanwhile, had 18 completions in 30 attempts for 327 yards and added 64 rushing yards in seven carries.

Although Loyola led 7-3 at the half the Caravan was the dominant team and the first to get on the scoreboard by virtue of Chappetto’s 32-yard field goal in the second quarter.

With two minutes left in the half the Caravan drove to the Loyola 2 before Arrington was thrown for a 7-yard loss on a fourth-down trick play.

Led by quarterback Jake Stearney, the Ramblers went on a momentum changing 91-yard scoring drive climaxed by Charlie Mahon’s one-handed catch of Stearney’s 15-yard pass in the end zone for his first touchdown of the season.

Prior to this game Mahon had caught only four passes for 44 yards but against the Caravan he snagged four for 40 yards and, as Holecek pointed out, “two of those were really, really good ones.”

“They changed up the defense and Jake put some great balls up there,” Mahon said. “On the last play of the half we wanted to take a shot. Jake was scrambling when he threw a great ball and I was able to catch it.”

In Stearney’s opinion, “The momentum switch (that began with the touchdown on the last play of the first half and continued when Kreutz scored his two touchdowns) was the key.

“James is a dynamic player. I was shocked when he went on that long run for the touchdown. I think he broke three tackles.”

After All-State candidate Marco Maldonado went on the disabled list with a broken collarbone that was sustained in the closing seconds of the 46-43 victory at Brother Rice in the fourth game of the season it created a significant void in the Ramblers’ running game.

Regan and Will Nimesheim, who was promoted from the sophomore team, have collaborated to partially compensate for the loss but they have been hindered by injuries.

“Nimesheim had a thigh bruise (that limited him to one carry) and Regan was still gimpy (from a knee injury late in the fifth game of the season) so tonight we were down to our third and fourth stringers,” Holecek said, explaining why Kreutz was unexpectedly transformed into a major offensive weapon as a backup.

Kreutz had carried only once (in the previous game, when he rammed across the goal line from a yard out); against the Caravan he rushed 12 times for 76 yards.

“We knew James was a short-yardage guy,” continued Holecek, who almost always confines his players to offensive and defensive roles. “He’s a special athlete — full speed in everything he does — so we wanted to try him out. That one run, holy cow!

“And once again we saw how much Stearney contributes with his passing and running.”

Kreutz downplayed his performance in his new role.

Indicative of the strength of Loyola’s regular-season schedule seven of the Ramblers’ eight opponents from Illinois earned slots in the playoffs and Marquette High, their opponent in the season opener, has advanced to the second round in its bracket in the Wisconsin playoffs.

It will take four more triumphs to put the Ramblers in the 8A championship game that will be played at Northern Illinois University on Saturday, Nov. 27.