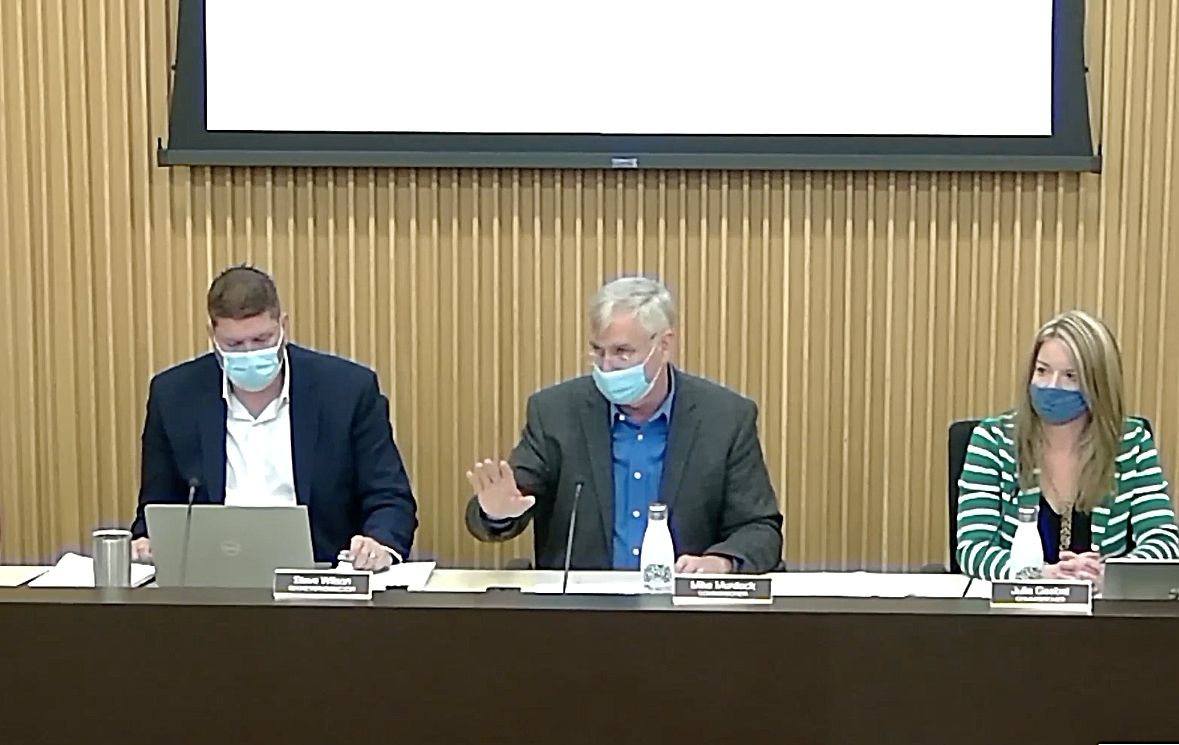 Park Board President Mike Murdock addresses an audience member during the board's meeting on Monday, Oct. 18.

The gavel got more use than usual Monday evening in Wilmette Park Board chambers.

Facing dozens of residents opposing the matter Oct. 18, Board President Mike Murdock occasionally thumped a gavel to contain applause and banter from a standing-room-only crowd largely protesting a proposed renovation to the Lakeview Center in Gillson Park.

More than 30 residents provided more than 90 minutes of testimony (VIDEO) in advance of the commissioners’ unanimous approval of the $1-million project.

While the content offered during the board meeting was compelling, it was just a percentage of the information gathered and reviewed by park officials over a nearly 20-month process.

“When it comes to this project, I don’t understand the angst,” Murdock said. “This is a relatively minor project. It’s an interior renovation with a deck addition.”

The resident group Keep Gillson Green produced the greatest obstacle to the renovation, ramping up their efforts over the past month to drum up more opposition to a proposal they felt was unnecessary for and detrimental to the future of Gillson Park.

Leading up to the meeting Oct. 18, the group delivered a physical letter to Wilmette residents urging them to attend the proceedings.

The letter contained multiple inaccuracies when compared to district documents detailing the plans for the Lakeview Center and Gillson Park. Most notably, the letter — which was obtained by The Record — said that the renovations would “completely destroy” the park’s trees and add new parking and concrete to the park. As stated, those assertions are not found in either the Lakeview Center renovation designs or the Gillson Park Comprehensive Master Plan.

The letter prompted district officials to email community members on Monday, Oct. 18, to “ensure the correct information is being disseminated.”

The back-and-forth led to a tense Park Board meeting in which a number of residents argued that the Park Board was not listening to their pleas.

After public comment, multiple commissioners responded by pointing out that opposers were not the only voices they were hearing and that a renovation of the Lakeview Center was overdue.

Board Vice President Julia Goebel retold an anecdote about a film scout who thought the Lakeview Center was the ideal place to film a scene — the setting was a truck stop.

“The point is it is not in great shape,” she said. “It is not useable in a way that people who moved to Wilmette (want it to be). … We have a duty to invest in Wilmette.”

The Lakeview Center was built in 1989 and has yet to see significant renovations, according to the district. The improvement plan consists of three stages — the lower level, the upper level and the exterior — to modernize and reconfigure the building’s spaces and aesthetics.

The renovation also includes bathroom work, a separate budget item projected to cost between $85,000 and $128,600 for both the first and second phases, making the project’s all-in funding estimate $1.09 million.

Residents concerned about the proposal — 23 of whom spoke at the meeting — argued that the increased usage would be detrimental to the overall well being of Gillson Park and its neighbors.

Some residents questioned why the project was separate from the Gillson Park Comprehensive Plan, while others lambasted the district and Park Board for everything from survey errors to contractor selection to public safety.

Beth Beucher, a member of Keep Gillson Green, presented local first-responder statistics she said she collected and told the board Gillson Park safety is a higher priority than the Lakeview Center. She added that she believes many residents avoid the park because of overcrowding.

“One of the things that was raised at (a previous committee meeting) that I think the park district has not looked at and has not explained is what role its policies have contributed to the overcrowding and congestion within the park,” she said.

Numerous residents told the board to “slow down” and opined that the board was reckless in its rush to update the Lakeview Center.

“It is not falling down. There are not people lined up to have weddings there,” resident David Gustman said. “I think you should take a pause, take a break, and listen to your citizens.”

The board also heard from eight residents in support of a Lakeview Center overhaul, including Gina Speckman, a Wilmette resident and the executive director of the North Shore Visitors and Convention bureau who said she recently attended a wedding at the facility.

“I am happy you are looking out for the future of Wilmette and what we could be in Wilmette,” she told commissioners. “I want to keep (Gillson) green too, but I also want progress. I would love for Lakeview Center to be renovated. It is a dump. … I don’t know how anybody can say that it is a decent event space for anybody, kids or adults.”

Answering a direct question from a resident, Goebel — who is the Lakeview Committee chairperson — began the board discussion by explaining why the Lakeview Center project was not part of the park’s comprehensive plan.

She said it never had been because it is an interior renovation in a different category that infrastructure and landscaping needs that highlight the master plan.

“It was not taken out. That’s a misnomer. It was never in,” Goebel said.

The board tried to address a variety of the presented concerns, while assuring the audience that the planning process was methodical, not rushed.

Before approving the design plans, the commissioners expressed dismay that misinformation skewed perception of the project and maintained that they believe the renovations are in the best interest of the park and Wilmette residents.

Murdock added that residents’ concerns begin in a different place that he hopes can be addressed. He believes the criticism is amplified by a distrust for the Park Board and staff that has been active since the failed 2015 referendum.

“The problem is so many folks in town simply don’t trust us,” he said, adding that he believes park officials should never have included Langdon Beach improvements with renovation plans in 2015.