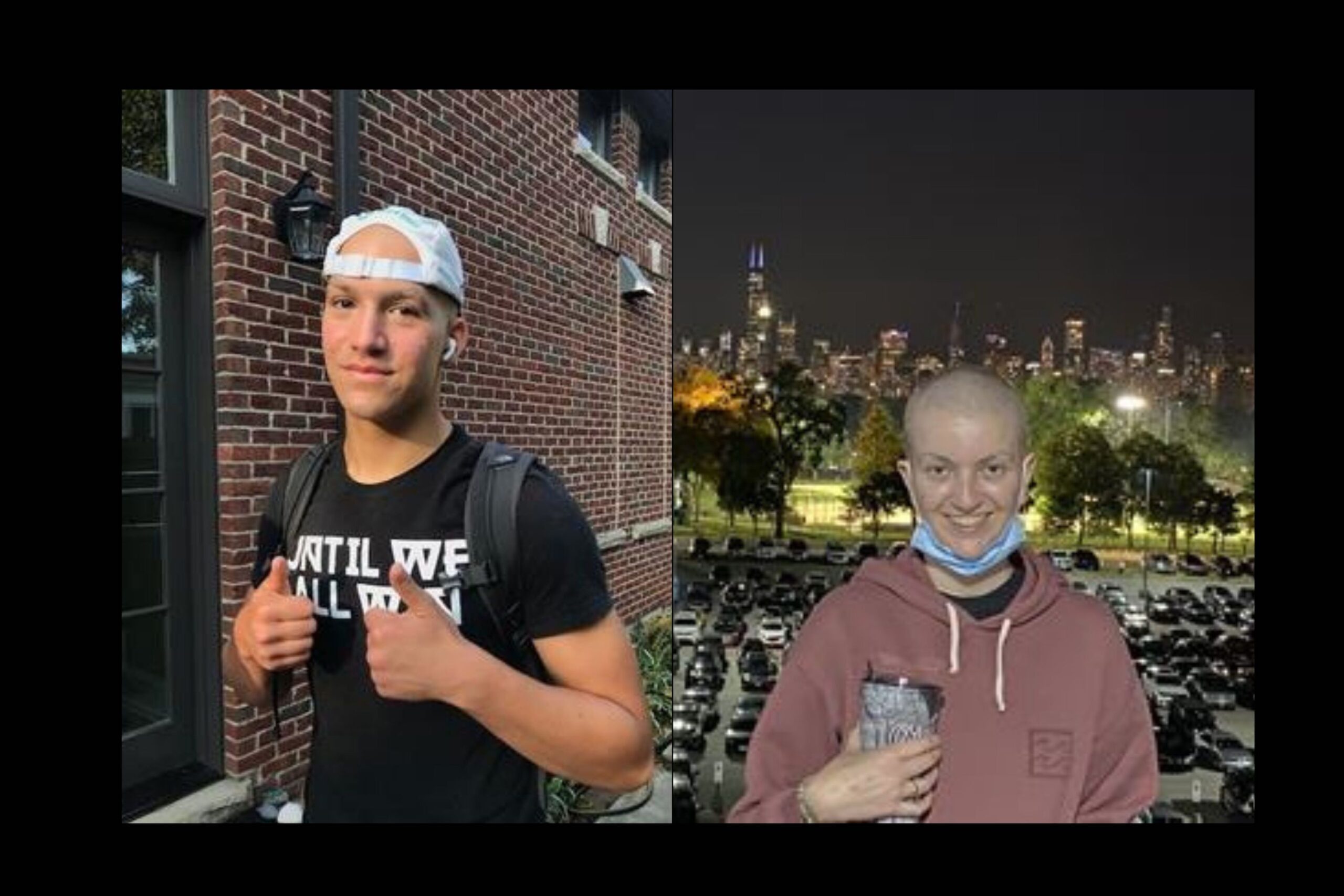 John Salvi and Mia Cummins are both New Trier High School juniors who were diagnosed with rare pediatric cancers in the last year. | Photos Submitted

Quitting is not an option for John Salvi and Mia Cummins.

Both Wilmette teenagers were diagnosed in the past year with rare forms of pediatric cancer, and since have battled through intense medical treatments and procedures with the hopes of finding normal once again.

Their spirit is the guidance light for nineteen Wilmette residents who have united to form Team 2023, which raises funds to fight pediatric cancer through the Great Cycle Challenge.

Through the month of September, Team 2023 — which is a nod to the New Trier High School graduating class of Salvi and Cummins — collectively rode 3,435 miles and raised more than $20,000 and counting.

Fundraising for Team 2023 and the Great Cycle Challenge is open through October. Click her for more information and to donate.

Team 2023 was spearheaded by Peggy Brink and Brenda Werth, two Wilmette mothers who wanted to bike more often this fall and in a search for motivation found the Great Cycle Challenge, an annual nationwide effort that has raised more than $30 million for pediatric-cancer research since 2015.

In honor of John Salvi and Mia Cummins, two children from their Wilmette neighborhood, Brink and Werth began recruiting. It did not have take long to form Team 2023.

Once John Savli’s mother, Alice, heard about the efforts, she jumped aboard, too.

“I feel like I am doing something and helping and supporting John, Mia and all these other kids suffering from childhood cancers,” Alice Salvi said. “When this happens to your child, you feel helpless, really helpless. This gave me something to challenge some of that pent up helplessness by doing something positive.”

Alice ranks second on Team 2023 in miles biked (nearly 600) and funds raised (more than $3,500). In the funding category, she is behind Mia’s father, Liam Cummins, who has raised more than $5,000, ranking him 15th in Illinois and 157th across the nation in the Great Cycle Challenge.

John Salvi is working through 24 rounds of chemotherapy in an effort to eliminate an inoperable brain tumor, a rare germinoma that was discovered earlier this year.

John and company drive 50 miles to Warrenville every morning for the treatment before returning to Winnetka in time for the opening bell at New Trier. After the final bell, John is off to rowing practice. He gets home at around 7 p.m. in time for dinner and homework.

“One of the side effects of the treatment is extreme tiredness,” Alice said. “I don’t know how he continues to do it. He and Mia and all the other kids at the hospital, the amount of bravery and strength and sheer determination is truly remarkable.

“My husband and I are exhausted. I don’t know how he is doing it, but he’s doing it.”

Mia Cummins, 16, caught a persistent fever in September of 2020 and was admitted to the hospital. Doctors noticed her liver was enlarged, and Mia was diagnosed with hepatocellular carcinoma, which affects just one in 2 million children annually.

Over the past year, Mia has braved 11 rounds of chemotherapy and 14 surgeries. In July, Mia received a liver transplant. In a delicate phase of recovery, Mia is not practicing in-person learning, but her mother, Susan Troy, said she is working her way back to normalcy.

“She can’t go to school, but other than that is in good form,” Susan said. “She is missing a lot of what a 16-year-old would be doing, but she is getting back — a little bit of paddle tennis with her friends, some bike riding. She’s alive and with a good prognosis.”

Susan and Liam are from Ireland, where much of their family remains. Locally, they have relied on the support of their community since moving here in 2011.

So when Susan and Liam heard of Team 2023, the support felt on brand for their community, and Liam immediately joined the team.

“I was pleasantly surprised, but not surprised because I’ve seen how good people around Wilmette have been this whole year,” she said. “We have no family support here … our friends and neighbors have more than made up for it. It’s been fantastic — whether it’s meals or gifts or organizing little events to keep spirits up. It’s very thoughtful.”

Susan and Liam have also been able to communicate with the Salvis, as the families in similar positions share information and support each other.

Werth, a Team 2023 co-founder, said that most Team 2023 participants have children that have grown up with John and Mia and felt it was vital to support them.

“What these kids are dealing with is definitely our inspiration,” Werth said. “It is a good way for us to fight the battle with them.”