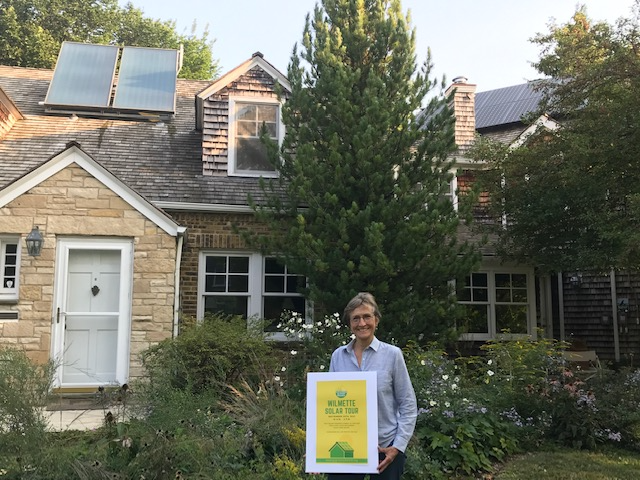 Go Green Wilmette is leading a free tour of more than a dozen Wilmette homes with solar panels from 10 a.m.-2 p.m. on Saturday, Sept. 25.

During the tour, GGW President Beth Drucker and other homeowners will provide information about the solar-power systems installed on their homes. The tour will go across Wilmette as seen in this interactive map.

Please note, some of the installations will offer “curbside viewing” only.

According a press release from Go Green Wilmette, the organization and another local green group, Go Green Northbrook, have organized their own villagewide solar tours in conjunction with the Illinois Solar Energy Association’s annual statewide tour on Sept. 25.

Village President Senta Plunkett announced to the guests of the Wilmette Beach Bash that that night, Sept. 18, was the start of a series of events to honor the village’s 150th birthday.

The Village of Wilmette was incorporated in 1872, and for the next year, will celebrate the 150th anniversary of that moment, according to Plunkett.

“To mark this milestone, the Village is embarking on a series of events to educate us about Wilmette’s history, to promote the special aspects of our Village and most importantly, to have fun,” she reportedly told the Beach Bash crowd. “After what we have all endured the last 18 months, we look forward to the celebration to renew and strengthen the bonds we share as friends and neighbors. I can think of no better place to begin the celebration than right here, at Beach Bash 2021, in partnership with the Ouilmette Foundation.”

According to a press release from the Village of Wilmette, the Wilmette Village Board’s Sesquicentennial Planning Committee is laying out a “celebration that will promote community spirit and unity while honoring the Village’s history and looking toward its future.”

The events will be punctuated by a community festival on Sept. 10, 2022, in the Village Center.

In addition to the festival, the committee is planning a speaker series, a winter celebration, art shows, and projects to enhance public spaces in the community, the release says.

A day of fun and fundraising included a number of contests and prizes, many of which were donated by Loyola alumni.

Courtney O’Connor and Chris Burke had the longest drive on the 12th hole. Kevin Willer and Brian Callahan were closest to the pin on the 3rd hole.

“We are grateful to our golf outing hosts, Rob Banas and Rambler members of North Shore Country Club,” the release says. “Their generosity and efforts provided us with the best possible experience.”

The goal of the outing, according to the release, to raise enough funds to provide a year’s tuition for one student was achieved. Over the past 27 years, the golf outing has raised more than $250,000 for the tuition program.