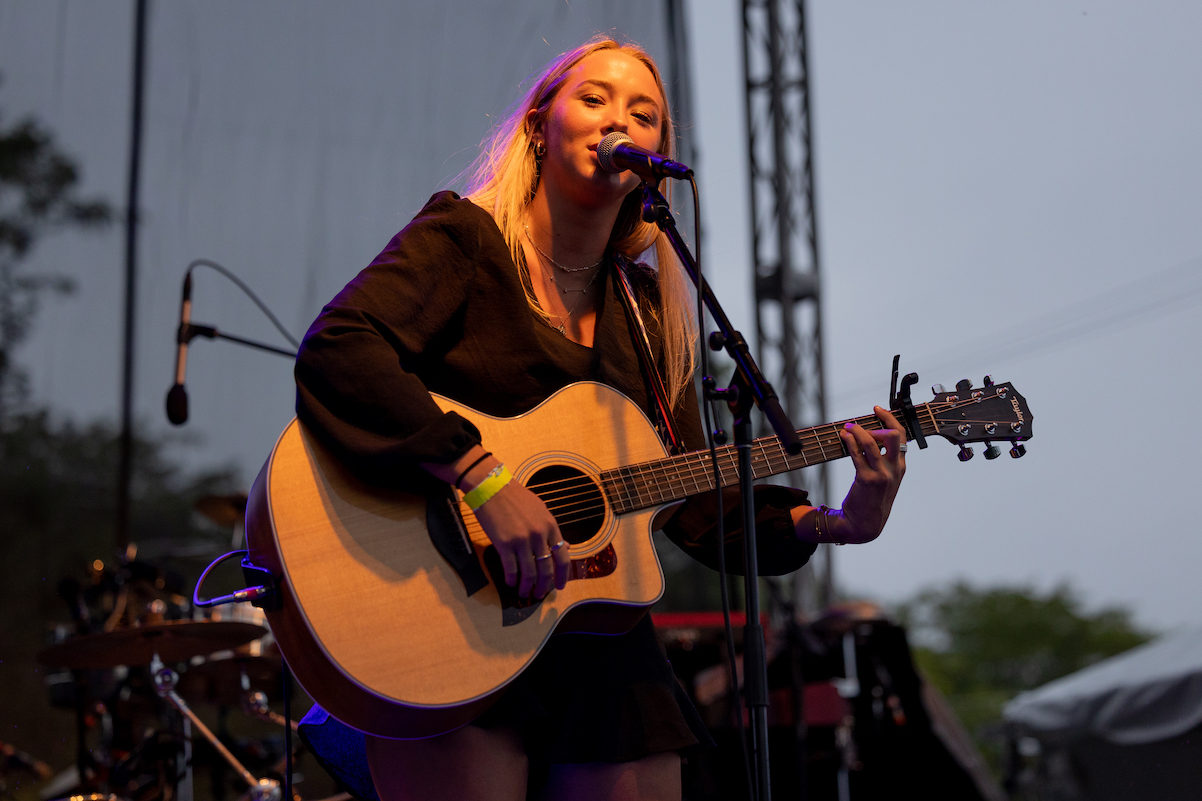 Lauren Gottshall performs for her hometown crowd of 3,000 as an opening act in Glencoe Live in September. | Rob Lange/The Record North Shore

Forged with passion and strengthened by distress, the bond has become an essential part of Gottshall’s existence.

Just 19 years old, the Glencoe native has just begun to carve her path in a grueling industry known to overwhelm talented young performers. But with the music as the purpose, and fame and fortune as merely a potential side effect, she is ready.

“The only thing that stayed really positive in my life is music,” she said. “It’s the one thing no one can take away from me.

“I say music saved my life. I think it gave me a purpose. When I was in high school and I didn’t know what I was doing and so many changes were happening, having music gave me stability and grounded me. It gave me something to focus on besides my anxiety and my parents’ divorce.”

Gottshall graduated from New Trier High School in 2020 and is a sophomore at Southern Methodist University in Dallas.

She just finished her busiest summer so far as a performer, taking the stage at, among other places, the House of Blues in Dallas and in Glencoe opening for O.A.R at a charity concert.

Her bond with the music is more durable than it has ever been, and it is empowering the 19-year-old songwriter.

“It was the most surreal feeling. I can’t even describe it,” Gottshall said of her summer. “I worked so hard to get here and now I’m here. It was very rewarding, because I have been putting myself out there and writing so much music, so it felt good to be recognized.

“I have a lot to say and I want people to hear my music.”

It’s been that way for a long time.

Around the age of 6, Lauren was belting out Carrie Underwood hits, prompting Justine to enable her daughter’s skill.

At 12, Lauren had a guitar in her hand and was penning lyrics to her own songs.

“Music has always been such a big part of her and so inherent within her,” Justine said. “Honestly, she was signing and making up diddies by the time she was so young, it just kept growing and growing. … From my perspective that spark was always there.”

Before the guitar, Lauren had her hands on a piano.

But she learned quickly that wasn’t it. The lessons were too rigid. Instead of Frederic Chopin, Lauren wanted to learn Taylor Swift, or better yet, her own music.

So piano lessons were out, and the Glencoe Academy of Music was in.

Lauren enrolled in the music school in middle school, around age 11, she said. It was there that her desire to write and play her own songs was amplified.

“I fell in love with it even more,” she said, “because (academy director Carlos Bendfeldt) let me do whatever I wanted but was still teaching me. I was able to pick the songs we learned … and he was really supportive of letting me write songs and record. It all took off from there.”

They learned newer pop music and classic rock music. Bendfeldt picked up on Lauren’s style and range and said they worked through all the music within her abilities. She the started to incorporate all of it into her own work.

Amid the freedom of expression, Bendfelt noticed something else too — something he had not seen before.

During a session, Lauren would take a few minutes of free time and write. A half hour later, she had a new song. Just like that.

“The ability to be able to come up with these incredible melodies with lyrics on the spot is genius,” he said. “I’ve never seen that happen. I am sure it happens, but I personally have never seen it.”

When high school rolled around, Lauren stayed busy. She was an athlete (basketball and lacrosse) and a volunteer for local charities, but music became the priority.

She published her work on Soundcloud and played live at Starbucks and other small venues around town.

Around the same time, Lauren’s parents split up, intensifying her anxiety, she said. Music became even more of a refuge, especially performing it on stage.

“When I’m up there, I’m very content,” she said. “In my life, with my parents’ divorce and struggles with anxiety, music has stayed stable. I am very proud of the work I have accomplished, and nothing compares to performing on the stage.”

The experiences also shaped her music, making her writing more soulful and complete songs and pushing her into a folk-pop-country hybrid genre.

Also during these years, Lauren wanted badly to be on a televised singing competition, like “The Voice” or “American Idol.”

She tried out numerous times for them only to get turned away. Producers even flew her out to Denver for a closer look, only to tell her she was too young, Lauren recalled.

The college application process also included an audition, for which she was one of about 5,000 to try out for six spots in the University of Southern California’s prestigious Thornton School of Music. Though a finalist, she was again passed over.

Lauren called the denials “a blessing in disguise.”

“I think everything happens for a reason,” she said. “I don’t think I would have the opportunities I have if I had been on a TV show.

“Dallas solidified what type of artist I am. … Choosing SMU was the greatest decision I have made. Dallas has embraced me in a way I don’t think LA would have.”

It all led to this past summer, as Lauren’s connections and evolution put her on her biggest stages to date.

Off the stage, she is constantly working on new music and has a music video for a new song, “Easy For Me,” in development.

Her debut album “Expecting More” is available to stream online and includes songs like “Me and You” and “Back To Us.”

The busyness has come with business, too. And Lauren said she is fortunate to have her mom, an attorney, by her side for everything from contract review to general support.

Justine, who has two other children, said enabling Lauren’s talents has been work, but the good kind.

“It’s a cliche, but it’s the greatest joy of my life. It’s the most important job I have,” she said. “There are years of being tired, but there is nothing else I’d want to do.”

Lauren hopes to soon drop a four- to five-song EP — which will include three songs that she calls her “best work” — and keep performing in and around Dallas.

Is stardom in her future? Bendfeldt said it’s a matter of when, not if.

“Lauren just has to be in the right place at the right time,” Bendfeldt continued. “The right music producer needs to listen to her. So many students have come through here, and she’s the one who really impressed me.”