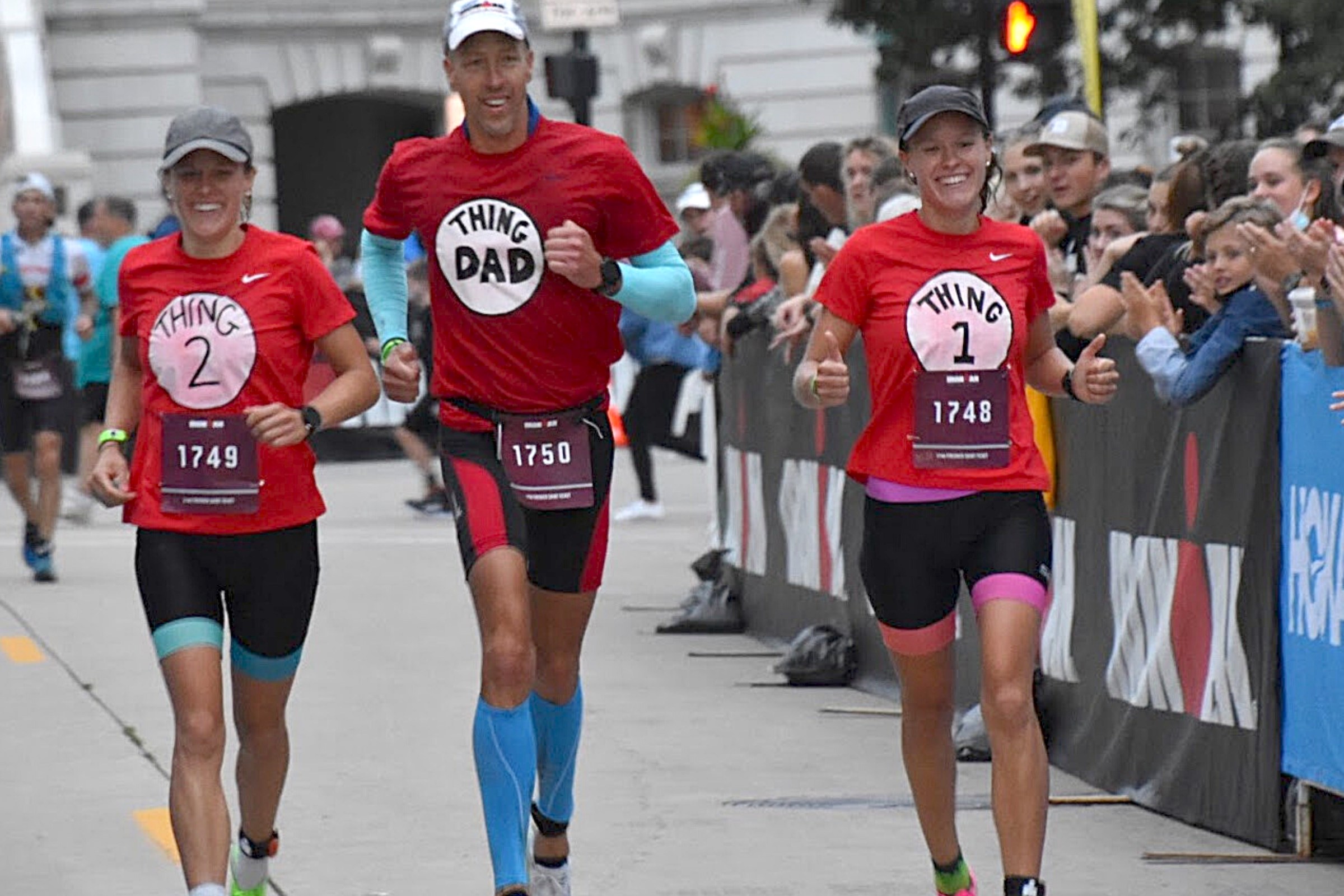 (Left to right) Jessica, Doug and Courtney Ackerman trot toward the finish line together Sept. 12 at Ironman Wisconsin in Madison. | Photos Submitted

The Ackermans couldn’t have scripted a better finish. In fact, all three had hoped for different endings.

Leading up to the Ironman Wisconsin on Sept. 12, twin sisters Courtney and Jessica were dead set on taking down Dad. And Dad, Doug Ackerman, had domination plans of his own.

But after two miles in the water, 112 on a bike and 20 more on their feet, the trio from Wilmette wound up in the same place with about six miles until the finish line.

“Never in my mind had that scenario played out in which we all finished together,” Doug Ackerman said. “It wasn’t until we were all walking together that we thought. ‘This is going to be pretty cool, all coming across at the same time.’”

Wearing matching Dr. Seuss-inspired T-shirts, the three Ackermans trotted the last 100 yards in unison to a soundtrack of resounding fanfare from those gathered around the finish line on Sept. 12 in Madison.

Their time — 12 hours 13 minutes and 43 seconds — became secondary to the memorable family finish.

“None of us was having a perfect day, as a result the time didn’t really matter at that point,” Jessica said. “It was better to finish together rather than finish alone.”

Plus, Courtney said something like that may never happen again.

“We decided it was a once-in-a-lifetime thing to finish together,” she said.

Courtney and Jessica made names for themselves on the local cross-country scene, leading New Trier High School to a state championship in 2011 and earning multiple state medals in their Trevian careers.

The twins are just four years out from competitive cross-country stints at Division I college programs: the University of Illinois for Courtney and Princeton University for Jessica.

Both runners suffered injuries in college. Once on their own for training, they found a more nurturing way to stay fit.

“Now, with no coach, if my body’s not feeling it, I don’t do it,” Jessica said. “The results have been really healthy and I’ve been feeling really fit and strong and discovered a different love for the sport.”

Jessica began cross training, throwing in biking and swimming, and completed two Ironmans in 2019. In a similar position, Courtney worked up to a half-Ironman and was ready for the full version in 2020.

They had a great idea to get Dad on board, and it didn’t take much talk, Jessica said.

“There was no challenge necessary,” she said with a laugh. “It never got to a point where any convincing had to be done. Courtney decided she wanted to do her first full (Ironman). Both of us jumped on board and said (to Doug), ‘You are in too.’”

While the sisters’ trophy cases are crowded, their father has accolades of his own.

Doug Ackerman had two Ironman finishes under his belt, and while his daughters are queens on their feet, he is a master on wheels.

“They are both strong bikers, but biking is my specialty,” he said. “If things went as planned, I would catch them on the bike. It would just depend on how much distance I would put between us.”

The three jumped feet-first into their training, ramping up the miles as the weeks went by.

All pushing for any advantage to take into race day.

“My dad for the last seven months was trying to convince us to get (a fitness) app and post all our workouts, because he wanted to be able to keep up with training,” Courtney explained. “For a while, we weren’t even telling each other what we were doing. We really had no intentions of doing (the race) together.”

On Father’s Day, Jessica and Courtney gifted Doug a T-shirt that said, “Thing Dad,” while they had ones of their own reading Thing 1 and Thing 2, a nod to the Dr. Seuss classic “The Cat in the Hat.”

In July, Courtney moved near Jessica in Colorado, and the two began training together at least four times a week. It was the first time the sisters trained together regularly since high school.

“Before that, we hadn’t lived in the same city since high school,” Courtney said. “It was really great. It was nice being able to train for the same race and have a training schedule.”

The course in play wound its way through the Wisconsin capital of Madison. A 2.4-mile, there-and-back swim in Lake Mendota kicked things off. A 112-mile, two-loop bike ride that encircled the city and was described as “hilly” followed, before a “rolling,” marathon run of 26.2 miles near the lakefront.

On race day, the twins had the lead coming out of the water, but as predicted, Doug caught them on the bike route.

With a big lead heading into the run, Doug said he did the best he could knowing his daughters were gaining ground. Then, about Mile 17, he said, his body started speaking up.

“My body was telling me I gotta stop and walk,” he said. “I did and they caught up to me. … They were starting to shut down too, I think they were pressing so hard on the bike to keep the lead to a minimum. I said, ‘Hey I’m done. It’s been awesome, but I’m going to be walking it in.”

Jessica’s and Courtney’s bodies were talking, too.

Jessica caught Courtney during the bike route, and the two decided to pair up the rest of the way, relishing the extra motivation after a grueling bike ride.

“The bike course was just hard … harder than I thought it would be,” she said. “The run was nice in the sense I was able to do the whole thing with (Courtney). We found each other at Mile 106 and finished out the bike together and finished the whole run. We both kept going through phases of wanting to walk or slow down and the other one keeping us going.”

So when the sister tandem caught up to Dad and saw him walking, a family finish felt right.

Even though, Jessica said, if she was feeling even a smidge better, she would have had different ideas.

“Our family is the most competitive family that I know,” she said. “If any one of us had a good day and felt awesome, I would have no second thoughts of leaving the other two in the dust.”

She can save that for next time, like when she and Courtney try their feet at the Chicago Marathon in 2022. As for Doug, a little break is in order after what he considers a special photo finish.

“There was a ton of crowd support and when the announcer saw us coming in together and announced it, what a wonderful family experience,” Doug said.