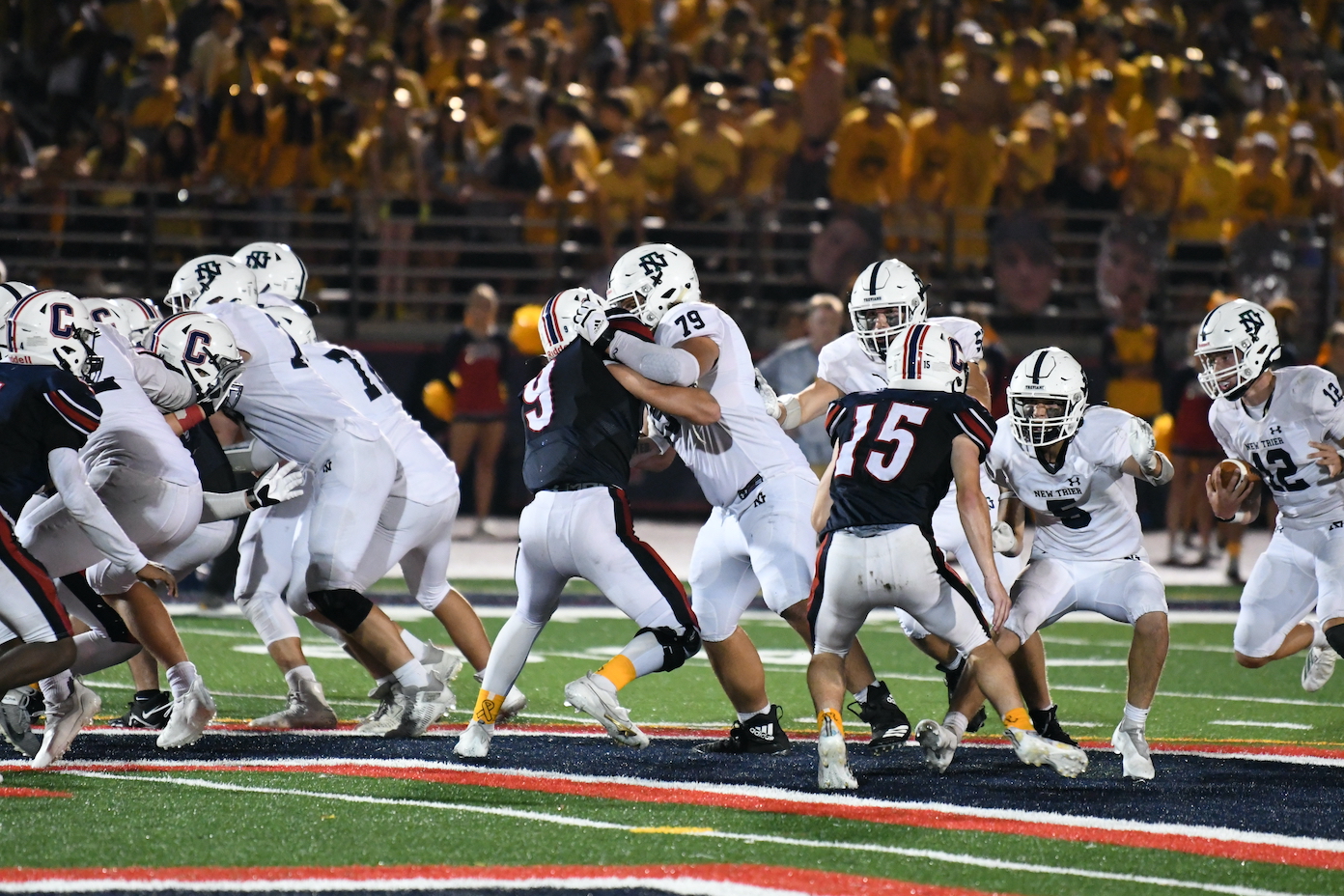 With the Trevians locked in a halftime tie one week after suffering their first defeat of the season, Jesse Mendoza knew his team needed a jolt of energy.

The New Trier senior leader addressed his teammates moments before the start of the second half with a simple, yet resounding message: Play like you want to win.

The Trevians manifested Mendoza’s motivation by opening the third quarter with nine unanswered points that helped them outlast the Conant Cougars 37-35 during a back-and-forth thriller on Friday, Sept. 17, in Hoffman Estates.

“Through practices and just knowing all the guys on the team, I know we have it in us to just dominate a football game,” Mendoza said. “We just have to bring it out. Sometimes we can come into a game thinking that we’re going to crush (our opponent) and that we’ve already won the game.

“I think the thing tonight is that some of us didn’t expect the game to be a fight, and we then had to tell ourselves it’s a fight all the way. Football games are a grind all the way through. It’s a battle. I just try to get everything out of all the team, and I think tonight we won a hard-fought game.”

New Trier rushed for more than 225 rushing yards in its Week 4 conquest.

“As an offensive lineman, we love to run the ball,” Mendoza said. “We just love it. But personally, I just have so much pride in the running backs when they score. I just love to see the team score but I love to see us win in a tough way and play with some (toughness) and just manhandle the other defense. We just take pride in that.”

The Trevians once again relied heavily on their offense — a unit that is now averaging 30.5 points per game through four weeks — to lead the way.

After an opening series that saw the Trevs go three-and-out, New Trier scored on five consecutive drives to end the contest.

Cremascoli authored yet another superb performance for the Trevians under center as he accounted for 250 yards of total offense in addition to his three touchdowns. Cremascoli threw for 145 yards while rushing for 105.

“That’s what we expect,” Cremascoli said of New Trier’s high-scoring performance. “​​That’s what we’ve been expecting since last year when we knew we had nine starters coming back on offense. We were really confident on how we would perform and I think we definitely showed that tonight.”

Although the Trevians’ offense was a bright spot again, the team’s defense could not slow down Conant’s attack.

The Cougars’ option-based offense led by senior quarterback Giuseppe Dugo moved the ball at will throughout the majority of the game.

New Trier’s defense has struggled to stop opposing rushing attacks through the first four games. The Trevians are allowing an average of 25 points per game, a total that is more than triple the average amount their senior-heavy unit allowed in the spring season.

While the defense did surrender a season-high point total, it forced a key three-and-out from the Conant offense on its first drive of the second half that resulted in a safety after an errant snap on a fourth-down punt attempt.

But the group’s struggles may indicate changes are on the horizon.

“We’re going to probably have to look at some new people on defense,” Doll said. “We’ll probably have to make some adjustments to some personnel. It’s just one of those things that after you go through tonight’s film, you’ll see a lot of missed tackles and we practice tackling everyday just like every other program does but it’s an attitude and we have to create a better attitude of getting to the ball and being more persistent.

“ … We haven’t had in a long time really two games like this in a row. And both of these teams kind of ran the ball right at us. We have to do a better job.”

The Week 4 victory ends the nonconference portion of New Trier’s season on a high note. The Trevs will begin Central Suburban League South play next Friday night with a familiar foe — their longtime rival, the Evanston Wildkits.