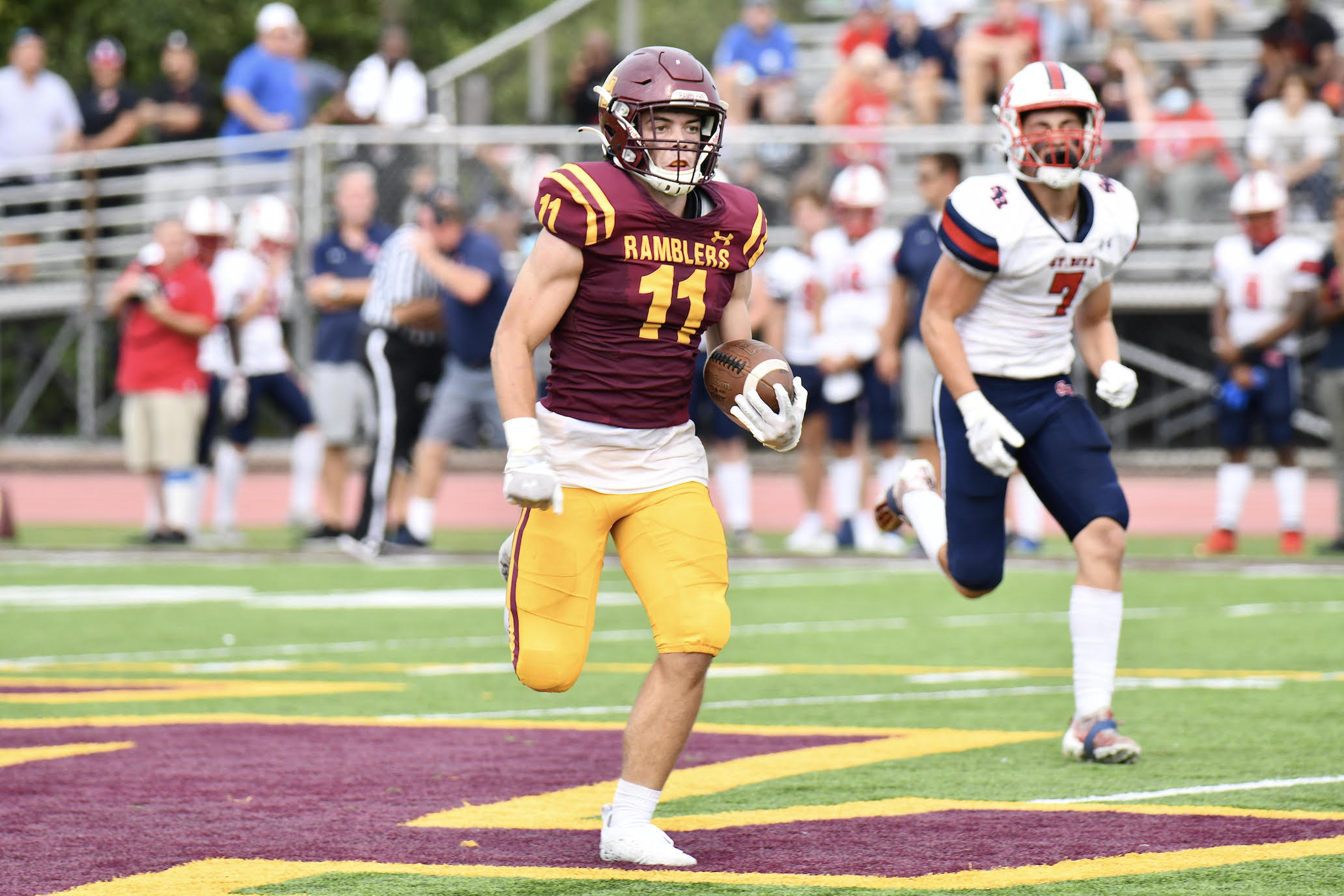 Using last spring’s spine-tingling victory and preseason evaluations as barometers, it seemed that Loyola Academy would have to go all out to defeat St. Rita when the teams met in the Ramblers’ Catholic League opener on Saturday, Sept. 11, in Wilmette.

Instead the game at Hoerster Field bore a resemblance to the lopsided triumphs that the Ramblers recorded in their preceding two nonconference contests.

They seized an early lead, weathered a mild counterattack and went on to a compelling 37-7 conquest of the team that the Chicago Sun-Times ranked No. 1 in the metropolitan area going into the season.

It was the St. Rita’s second setback in three outings. They lost a close game to Mount Carmel at home but then rebounded to down a Kentucky powerhouse, Trinity of Louisville, on the road.

In winning their spring campaign opener at St. Rita in March on their way to an undefeated six-game season, the Ramblers fell behind 3-0 in the first quarter, scored their go-ahead touchdown with 2:07 to play and held on to win on an interception by Artist Benjamin with 70 seconds remaining. It was Loyola’s close call of the season.

This time in the first series of the game Loyola forced the Mustangs to punt from their own 24-yard line and then drove 55 yards in three plays to open the scoring on Marco Maldonado’s 10-yard run and Mike Baker’s extra-point kick.

Later in the quarter, the Ramblers advanced to the Mustangs’ 7-yard line before settling for Baker’s 24-yard field goal.

Taking advantage of a fumble recovery at the Loyola 26-yard line early in the second quarter, the Mustangs got on the scoreboard on the next play by virtue of BJ Hall’s pass to Kyle Clayton.

Loyola regained its momentum when quarterback Jake Stearney’s passing led the Ramblers on an 8-play, 67-yard drive climaxed by Maldonado’s 3-yard touchdown run with 14 seconds in the half.

In the second half, the Ramblers took complete control.

On the first play out of the break, Stearney connected with Danny Collins on an 80-yard touchdown pass and on the first play of the fourth quarter he threw a 24-yard pass to Maldonado for the running back’s third TD of the game and ninth of the young season.

A 9-yard run by Jared Otarola in the fourth quarter concluded the scoring in the victory that sends the Ramblers into Friday, Sept. 17’s 6 p.m. game at Brother Rice with a 3-0 record and a nine-game winning streak.

“This was the biggest test we’ve had (and) this shows what kind of team we have,” Stearney said.

While Maldonado’s running was in the forefront in the two earlier victories in this game, Stearney was in the limelight. The junior completed 20 of 27 passes for 305 yards and rushed for 44 yards in six carries.

“If they’re going to deny the run, our coaches have done a great job of giving Jake options,” Loyola coach John Holecek said. “Jake is a special player and he’s going to keep improving. He’s poised in the pocket and he’s got good speed. He’s a Division I.”

Collins was Stearney’s primary receiver. Bringing back memories of his older brother, Artie, who is now catching passes in college for Johns Hopkins, Danny was on the receiving end of nine of Stearney’s pitches for a total of 155 yards.

He chuckled when asked about his 80-yard touchdown play.

“I got caught (on the 5-yard line after an 87-yard runback) on a kickoff return (in the opener against Marquette High) and I made sure I wasn’t going to get caught this time,” he said.

“We have so many weapons and our coaches give us a great game plan every week,” he continued. “They tell us: ‘Know your stuff; be smart; no mental mistakes; no physical mistakes.”

Against St. Rita, the Ramblers knew their stuff and played smart and their mental and physical mistakes were few and far between.

Offensively, Loyola is a multi-dimensional team.

While Maldonado’s 64 rushing yards in 15 carries were a season low, he added 3 pass receptions for 28 yards.

Peter Gilroy (2 catches for 49 yards) and Jack Fitzgerald (3 for 35) also were important weapons in the passing attack.

Defensively, Loyola played its best game of the season, holding the Mustangs to a meager 69 net yards. On offense, it amassed 466.

“When we play as a team we make plays,” said Kreutz, who made plays galore and was a constant thorn in the side of St. Rita’s talented quarterback Tommy Ulatowski.

Confronted with unrelenting pressure, Ulatowski completed only 8 of 16 passes for a meager 22 yards and scrambled six times for negative 26 yards.

Even though Loyola was dominant up front St. Rita’s offensive linemen impressed Williams.

“This was probably our most physical game so far,” Williams said. “They were big; they were wide; they were physical.

“This game gives us a huge boost of confidence going into next week against Brother Rice.”

Brother Rice is likewise going into the early season showdown with a 3-0 record after crushing Benet Academy of Lisle 42-6 on Sept. 10.