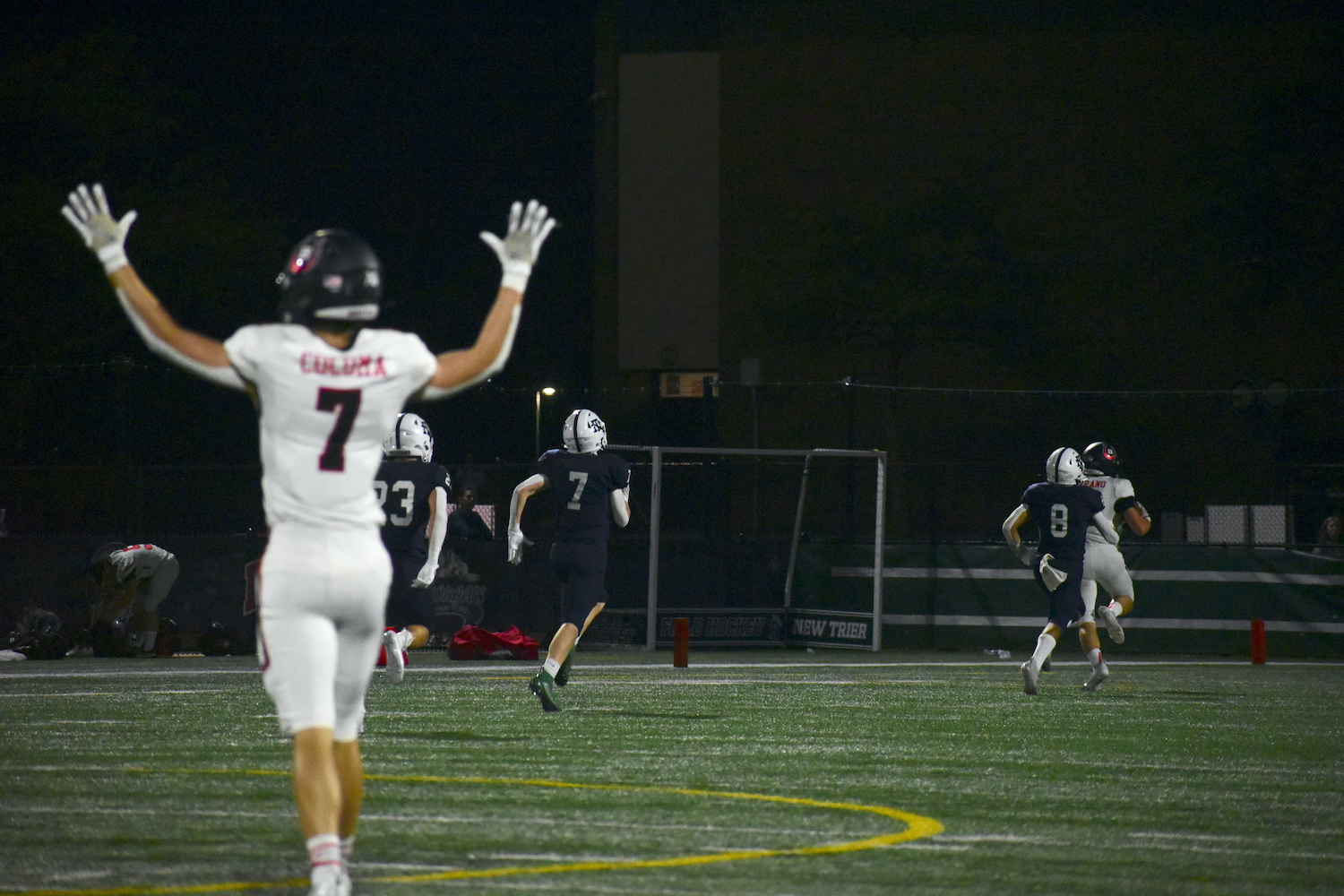 New Trier coach Brian Doll knew Barrington would pose a physical problem for this team ahead of their Week 3 matchup in Northfield.

The problem proved too difficult for the Trevians to solve, as the Broncos out-ran the Trevs and cashed in on big plays to hand New Trier (2-1) its first loss of the season in a 28-23 final on Friday, Sept. 10.

“We’re going to have to find a way to make plays when teams are big like that and can run the ball at you,” Doll said. “Tonight, we just didn’t do a great job there.”

Bronco quarterback Harley Thompson threw for 145 yards and rushed for 46, scoring both in the air and on the ground. Senior running back Evan Panesis rushed for 147 yards, 99 of which came in the second half.

“They were oversized for us to take on,” Doll said. “You could tell on some of those long drives that we were moving backwards.”

Barrington’s physicality came into play in the second half after New Trier took a 17-14 lead with 5:06 left in the third quarter. The Broncos picked up a quick first down before it seemed like momentum had turned against them with a dropped pass and a false start.

But Thompson completed a 43-yard pass to get his team in the red zone, and Panesis scored two plays later to make it 21-17 with 1:50 left in the third quarter.

New Trier’s quick three-and-out on its next possession gave Barrington the ball right back, and the Broncos drove from their own 26-yard line to pay dirt for a 28-17 in the fourth quarter.

The Trevians made a valiant effort. A deep ball to tight end Finn Cohan on fourth down set up a short Jackson McCarey touchdown run with 6:37 to go, but Barrington’s physicality was again too much.

The Broncos exclusively used their running game to pick up enough first downs to run out the clock.

“I think we have to keep persevering throughout the game. We can’t just give up, put our heads down, any of that stuff,” New Trier quarterback Nevan Cremascoli said. “We need to keep playing our game.”

New Trier’s defense played without Zieziula, who was out with a finger injury, and other critical defensive players, which hampered an already young defense. Doll said he stacked the box with eight defenders and said he probably should’ve thrown in 11, but Barrington’s size became too much for a defense learning on the spot.

The loss took away from another strong outing from Cremascoli. The senior threw for 184 yards and two touchdowns as he continued to show comfort in the pocket since the second half of the team’s Lyons game.

Cremascoli led his team down the field on the opening drive and capped it off with a perfectly placed 22-yard pass to Josh Kirkpatrick (9 catches, 87 yards, TD) in the corner of the end zone.

The senior made a critical 32-yard pass to Cohan (6 catches, 89 yards, TD) on fourth down in the fourth quarter to help his team stay in the game, leaving Doll impressed with who he has as his offensive leader.

“I’m really confident with him right now,” Doll said. “He throws a great ball. He’s very confident in all the receivers.”

Doll and his coaching staff will need to quickly find a way to help the defense improve as New Trier travels to play Conant on Friday, Sept. 17. Conant (1-2) fell to familiar CSL foe Glenbrook South 42-21 on Friday night.

The New Trier coach knows that the Trevians probably won’t see another team as big as Barrington is for the rest of the regular season but wants his players to learn from Friday’s mistakes in order to be better prepared for what lies ahead in conference play.

“You learn from the lessons of what didn’t work,” Doll said. “I feel this team, that’s what we’re going to be focused on this week: correcting those mistakes, getting our guys dialed in to what we need to do to be a better football team.”