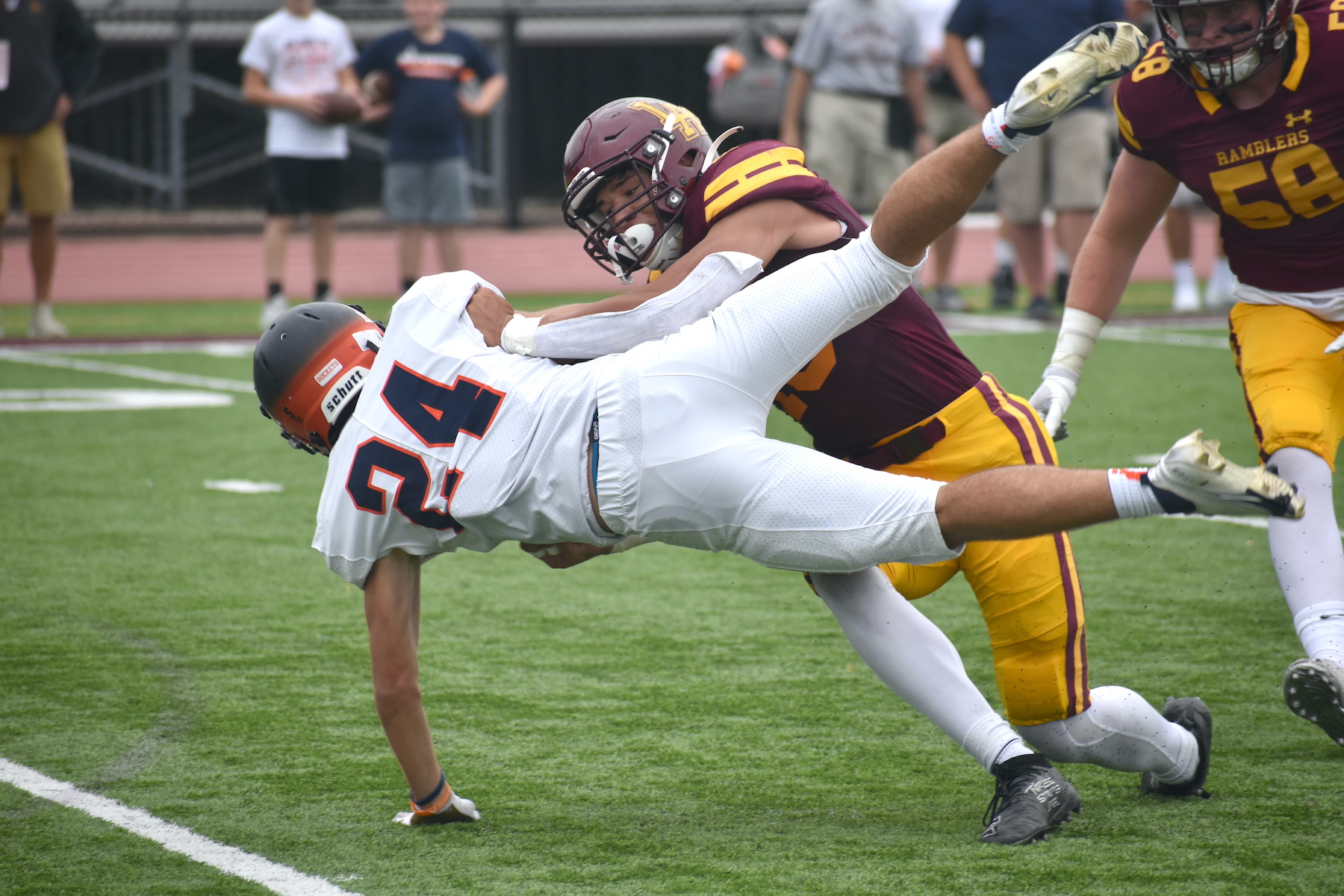 From downstate Rochester it’s a 215-mile trip to Wilmette but at Hoerster Field on Saturday, Sept. 4, the travel distance seemed relatively short when measured against the score and statistical differential that separated Rochester’s Class 5A football team from Loyola Academy’s Class 8A version in an unexpected meeting of perennial high school football powers.

Dominant in every phase of the game, the Ramblers overwhelmed the 2019 state champions 56-7 in recording their second one-sided victory of the young season.

This was an open date on Loyola’s schedule until coach John Holecek received a call from his Rochester counterpart, Derek Leonard, on Thursday evening at 5 o’clock, informing him that the Rockets’ scheduled Friday night opponent, MacArthur of Decatur, had to forfeit because of COVID-19 protocols and he was willing to take on the Ramblers.

Holecek, who’d been trying desperately to find a team to play so Loyola wouldn’t surrender playoff points, said “yes” in a heartbeat.

“They wanted to challenge themselves and that was a wonderful thing to do,” he said. “I’m extremely grateful to coach Leonard and his staff. They’re 5A playing against 8A. We’re bigger, stronger and deeper — and Marco Maldonado is a special guy.”

Maldonado got the Ramblers off to a superb start. With 3:08 elapsed, he ran 31 yards for the game’s first touchdown, accounting for all but five of the yards in the 51-yard drive.

On the Ramblers’ next possession the senior standout immediately hauled down a pass from junior Jake Stearney, outmaneuvered defenders and made it to the Rochester 1 on a 72-yard strike. On the next play he scored his second touchdown.

In the second quarter, Stearney collaborated with senior Peter Gilroy, senior Danny Collins and junior Spencer Leadbetter on touchdown passes of 10, 28 and 10 yards, respectively, as the Ramblers surged ahead 35-0.

On the final play of the first half the Rockets got on the scoreboard when senior quarterback Hank Beatty crossed the goal line on a keeper from 1 yard out after spearheading the 64-yard drive with his passing.

In the second half the Loyola defense reasserted itself and the offense produced a 35-yard third-quarter touchdown pass from Stearney to Maldonado and a 9-yard scoring run from senior Mike Regan.

Maldonado said in the brief time the Ramblers had to prepare “we locked in on how they moved (on defense); based on that I worked with my front row. We have big strong guys — they’re a machine.

“Jake has great talent (as a quarterback) and we have 100 percent chemistry after last season when he and I worked together (in backup roles).

The Ramblers amassed 530 yards to the Rockets’ 181 and they had 25 first downs to the visitors’ 11. They were 6-for-8 in third-down conversions and 1-for-1 in fourth-down conversions, while Rochester was 2-for-12 and 2-for-5, respectively.

“We had a basic game plan; we knew they like to do a lot of trick plays and we knew the quarterback (University of Illinois recruit Beatty) was a big threat so we based it a lot of our defense on him,” said junior Brooks Bahr, one of many shining lights on defense.

Facing unrelenting pressure from the rush, Beatty managed to complete 13 of 21 passes for 110 yards but he had -5 net yards to show for his 10 rushes, a testament to the ferocity of Loyola’s defense.

Junior defensive back John McGuire picked off one of his passes at the Loyola 20 to preface the drive for the second touchdown.

Despite the disparity on the scoreboard and in the statistics, Leonard had no regrets about scheduling what proved to be a mismatch.

“There are a lot of ways we can get better from this. You never know if you’re going to see an East St. Louis or a Montini (both of which are traditionally strong teams in the playoffs.)”

The Rockets showed no symptoms of being intimidated when they stormed onto the field prior to the pregame coin toss and planted their flag on Loyola’s logo at midfield.

“That thing with the logo got us fired up for sure,” said Stearney, who completed 17 of 23 passes for 280 yards.

On the ground, Maldonado (15 carries for 104 yards) and Regan (11 for 64) were in the forefront. A pair of reserves, senior Jared Otarola (6 for 38) and junior Peter Hogan (3 for 29), also looked good during their fourth-quarter stints.

“Going into the season I thought our offense would be strong,” Holecek said. “Defensively, I think we’ve found some guys who are playing well. I like what I’ve seen so far but the Catholic League is so crazy. We’ll see in the next three weeks.”

That’s when the Ramblers will play St. Rita (1-1 after a 27-14 conquest of Trinity in Louisville) at home followed by Brother Rice and Fenwick on the road.

The Loyola coach’s jubilation over the decisive victory — that came after an opening game 42-14 drubbing of Milwaukee’s Marquette High and an undefeated six-game spring season — was tempered by his regret that it erased a forfeit victory for Rochester over Decatur MacArthur.

“Now they have a loss,” Holecek lamented. “They came here and challenged themselves and it cost them. That shouldn’t be. Common sense should prevail on this during a pandemic.”

“I think the IHSA has to look at this,” Leonard agreed. “This is not a good rule for the kids. We want to play every week.”