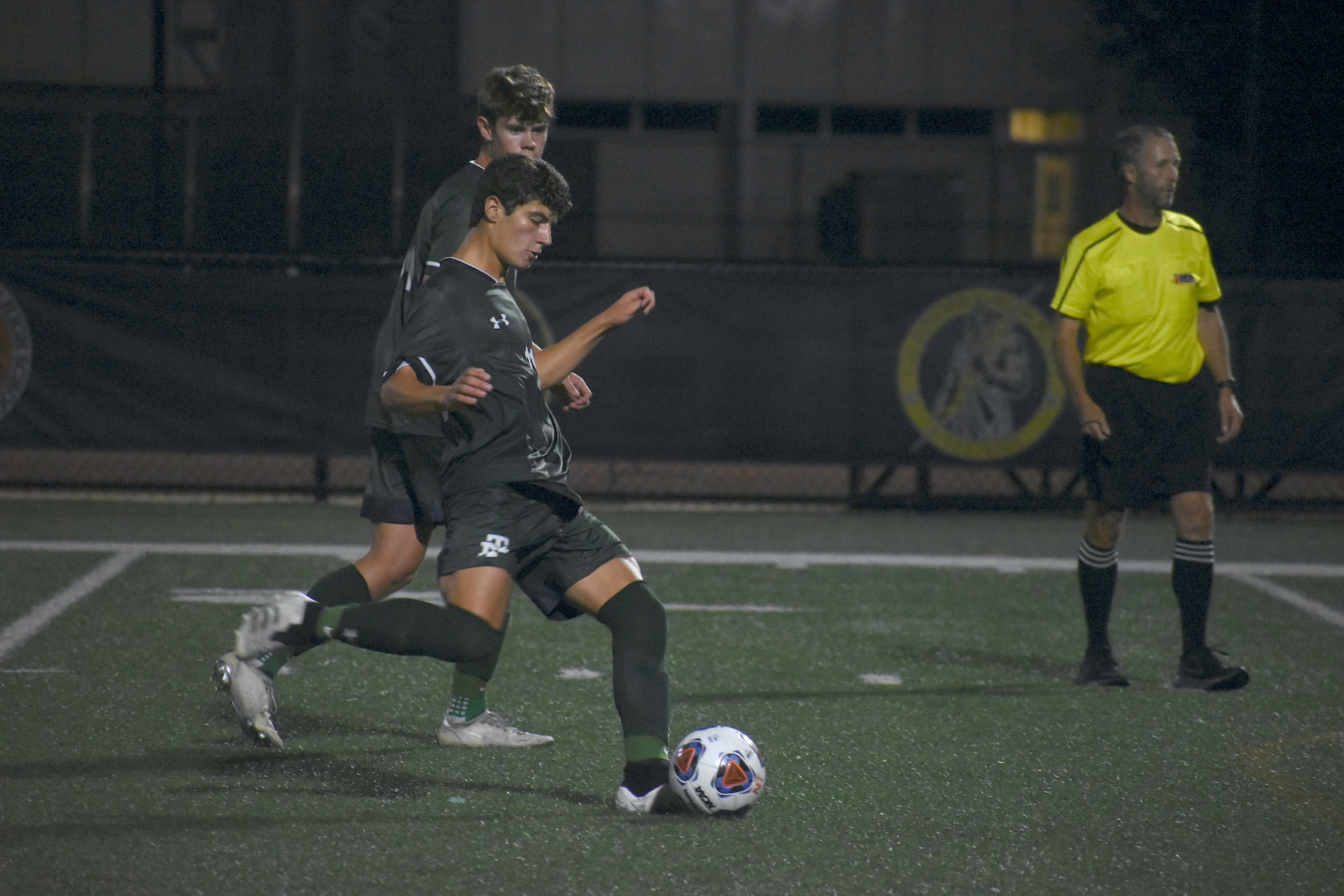 Evan Kanellos sets up for a free kick that turned into the game-winning goal Tuesday, Aug. 31, in Northfield. | Photos by Joe Coughlin/The Record North Shore

He liked it even better when he gave them a show.

Kanellos ripped a 25-yard free kick into the upper-right corner of the net early in the second half to give the Trevians a 2-1 lead on rival Loyola Academy.

“Walk(ing) up I was thinking top right, let’s hit a banger, we got a crowd here,” Kanellos said of his free kick. “When I scored, I didn’t even know what to do.”

Kanellos’ teammates helped him out with the celebration, and 30 minutes later New Trier celebrated a one-goal victory in front of that energized crowd on Tuesday, Aug. 31, in Northfield.

The matchup with the third time the teams have met in 2021, as they dueled twice — with each team winning a match — during the COVID-disrupted spring season.

“It was the best,” Kanellos said of the fans. “It makes it so much more fun, especially a big rivalry game. It was amazing.”

After Loyola rushed New Trier’s defense to start the game, the Trevs quickly countered. Kanellos found space on the right side and served a ball across the box. Matthew Perchik got a head to the pass and sent it over the goalkeeper’s head and into the far side of the goal just 90 seconds into the contest.

The tally put the Trevs in the driver’s seat on their home field, and it sucked the wind right out of visiting Loyola.

“When you’re going at it and all of the sudden give up a goal (90) seconds in, it sucks. It really is deflating,” Ramblers first-year coach Justin Dunn said.

But it did not take long for Dunn’s crew to rebound.

In the 16th minute, Loyola’s Liam Drehkoff elevated to meet a corner kick with his head and bounced it into the near corner from about 7 yards away.

It was 1-1 through halftime.

“I’m really proud of the guys to battle back there at the beginning,” Dunn said. “Obviously, we still have some things to work on.”

Out of the half, possession continued to favor New Trier and it didn’t take long for the Trevs to take advantage.

Less than seven minutes into the second half, Loyola lost control of the ball deep in its zone and followed with a penalty.

Kanellos took the free kick and his strike found an untouchable location to give New Trier the lead. Trevs coach Matt Ravenscraft called both his team’s goals on the day “unsaveable,” which he said they had to be against talented Ramblers keeper Alex Ainsworth.

“From the right side of the box I always try to curl it around the wall into the top-right corner,” Kanellos said. “I hit it nicely.”

Eight teams are competing in the seventh event, which was not held last season because of COVID-19 precautions.

According to the tournament website, seven local colleges will have representatives in the crowd throughout the four-day event that concludes Saturday, Sept. 4.

Opening a season against robust competition — such as Lyons, Buffalo Grove, Loyola and Libertyville — can only help, according to Ravenscraft.

“It’s always been a really competitive tournament,” Ravenscraft said. “… The teams that continue to come back to this tournament recognize that you could come out of this tournament with one win two losses and a tie and still learn a lot and still grow a lot.

“We have 16 new faces. … They are still learning how to be a varsity player. I think this tournament certainly accelerates their growth and development.”