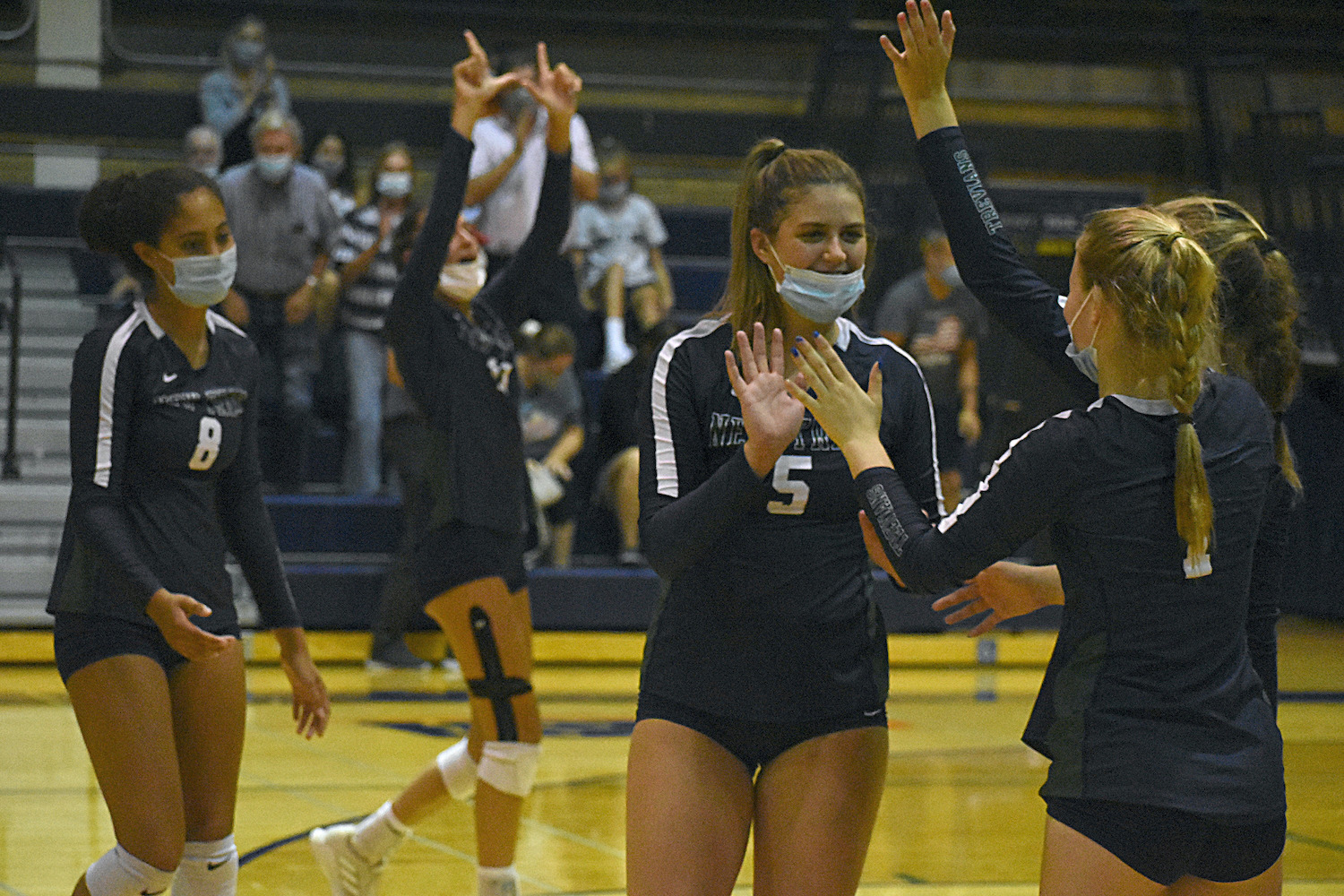 A sophomore on the New Trier girls varsity volleyball team, Ana Vetter gets pushed around.

But don’t worry. It’s not what you think. The literal — and playful — pushing is a team ritual to celebrate a big play, and so far, Vetter has been making a lot of them.

“It gets the adrenaline going. When you push someone, it’s saying that, ‘Yea, you did that. Good for you. Keep going,’” Vetter said. ” … It just boosts the adrenaline and keeps everyone going . It feels awesome — feels great honestly. It shows my teammates love me and care about me.”

One of five sophomores on varsity, Vetter is proving her mettle on as an opposite-side hitter, and at 6 feet 1 inch tall and left-handed, she is a threat at the net, whether on the attack or the block.

While Trevs coach Hannah Hsieh is still searching for her best lineup, four sophomores — including starting setter Nicole Cornell — and a freshman saw significant playing time in the victory over the Scouts.

The underclassmen, however, are surrounded by senior experience in libero Cara Murdock and outside hitters Julia Hall and Cece Burns, who was named All-Central Suburban League in the spring.

“That’s why it’s exciting,” Hsieh said of the lineup mix. “We have a lot of upside that we’ll see where it goes. I’m excited for a chance to play around with the lineup.”

Hsieh said the Trevs need to work on their serve receive and transition defense, as she hopes they can turn more digs into attackable sets.

One of the team’s early strengths, though, is its service, she said, and it was a big reason New Trier pulled away from Lake Forest in the second set Wednesday night.

The Trevians aggressive serving kept the Scouts out of their offense down the stretch. They finished with six aces in the match with five of them, including two from Burns, coming in the final set.

In the first set, the two North Shore teams were knotted at 8-8 before New Trier started to separate. The Scouts never fell too behind, and trimmed the lead to 20-19 late, but could never take control.

It was a similar story in Set 2, where Lake Forest held a 12-11 lead before New Trier turned on the burners with a 6-1 run and then an 8-2 burst to finish things off.

Burns finished with six kills while Cornell, a 6-foot lefty, had three kills, an ace and double-digit assists.

Vetter has been looking forward to varsity Trevians volleyball for a while and is liking what she sees so far.

“We’re just one big family. New Trier volleyball has been such an important thing to me for so long and I love all the players,” she said. “I think we have a lot to accomplish and we’ll see if we can keep winning and see how far we can it. I’m sure it will be far.”