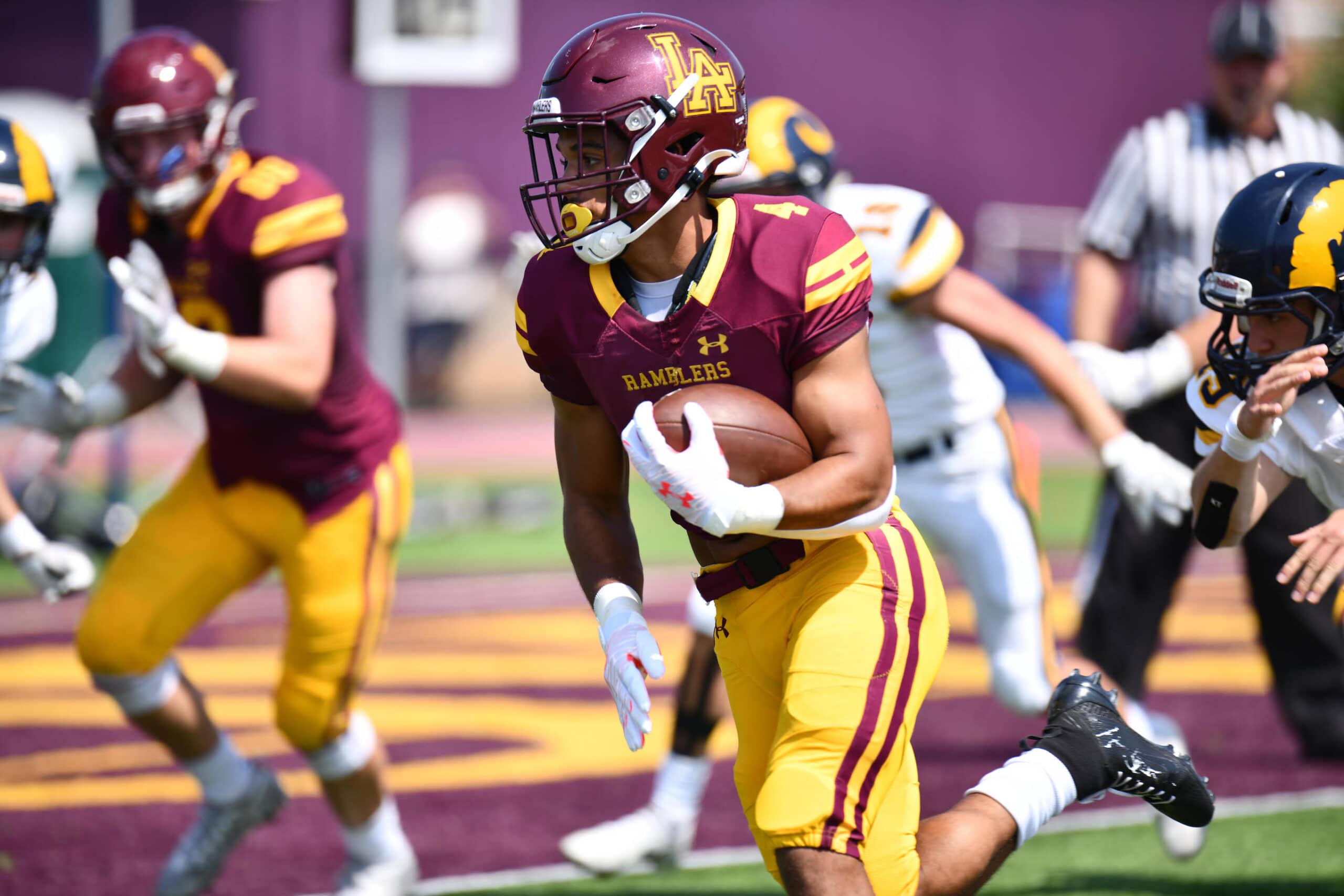 Senior running back Marco Maldonado finds room to run en route to 95 yards and four touchdowns all on the first half of the Ramblers' win Saturday, Aug. 28, in Wilmette. | Photos by Margo Grogan/The Record North Shore

Picking up where they left off at the conclusion of their unprecedented and undefeated spring season, the Loyola Academy Ramblers began their normal fall season on Saturday, Aug. 28, at Hoerster Field by routing Milwaukee’s Marquette High 42-14.

Senior Danny Collins began the rampage that saw the Ramblers score all of their points in the first half by fielding the opening kickoff on his own 8-yard line and returning it to the Hilltoppers’ 5-yard line before he was caught from behind.

On the following play senior Marco Maldonado took it to the end zone for the first of his four touchdowns.

“The whole week those of us on special teams were watching films,” Collins said of his kickoff return that was the first of many big plays by Loyola. “We knew we’d have a hole (on kickoffs). I got the ball and hit the hole.”

The next big play was on the Hilltoppers first possession in a third-and-14 situation at their own 27. Senior defensive back Andrew Pezza intercepted Luke Novotny’s pass and ran it back to the Marquette 6 but a holding penalty pushed the ball back to the visitors’ 46.

No problem — Maldonado did the rest.

The senior tailback went on runs of 25 and 3 yards and caught a 16-yard pass from junior quarterback Jake Stearney to put the ball on the 3 and then carried twice more to get the touchdown.

Twelve seconds into the second quarter the Ramblers struck again. This time a pair of junior defensive backs, John McGuire and Ryan Craddock, were in the forefront.

McGuire blocked a punt, and Craddock ran the football 52 yards to the end zone.

“I knew it was blocked but I didn’t know where the ball was and then I saw it,” Craddock said. “I was debating on whether to fall on it or pick it up. I decided to pick it up and never stopped running.”

Before the opener Maldonado told The Record: “I’m taking on more responsibility,” and he lived up to his own high expectations the next time the Ramblers had the football, breaking away for a 55-yard touchdown run.

Again the Hilltoppers were unable to make any headway and had to punt.

Starting on the visitors’ 37-yard line, the Ramblers relied on the passing and scrambling of Stearney and the running of Regan to drive to the 5-yard line. Then, Maldonado re-entered the rout and immediately ran for his fourth touchdown with 2 minutes 30 seconds remaining in the half.

Loyola coach John Holecek was delighted with the way his graduation-depleted team performed.

“You knew Maldonado would be a star,” he said. “Marco has great feet. It’s amazing that he doesn’t have a scholarship offer yet.

“Regan is a great No. 2 (running back). He’s got vision; he’s got quickness. He doesn’t have the top end speed of Marco but he has pretty much everything else. He’s an athlete; he was the shortstop on the baseball team.”

Making his first start after completing all three of his passes as graduated quarterback JT Thomas’ backup during the spring season, Stearney had three completions in 10 attempts for 90 yards.

“Jake was poised,” Holecek said. “He scrambled to get away from a couple of pressure situations. He is going to be a really good quarterback.”

Collins was on the receiving end of two of Stearney’s passes on plays covering 20 and 11 yards.

“I liked the way Jake stepped up as a junior,” Collins said. “He knew what he was doing. He called the right stuff and he’s very good at executing.”

Stearney praised his teammates and the game plan devised by the coaching staff.

“We had the momentum after that (opening) kickoff return,” he said. “And Marco is a great player. He’s something special — a guy to look for this season. I’m going to see if I can get him more touchdowns than (the 15 that June graduate) Vaughn Pemberton had (in the six-game spring season).”

The second half began with a running clock and second and third stringers on the field for Loyola. On its opening possession, Marquette advanced to the Loyola 34 before being stopped on downs.

It wasn’t until early in the fourth quarter that the Hilltoppers finally got on the scoreboard, thanks to a 12-yard pass from Novotny to Nick Ferge. Their other touchdown came on Bryce Roder’s 10-yard run with under six minutes remaining but by then the game was long gone.

“This was the ideal start for us,” McGuire said, expressing the consensus of the Ramblers.

The defeat was the second of the season for Marquette, which lost its opener to Hartland Arrowhead 38-22.

The second game for Loyola is scheduled to be against presumably powerful St. Rita back in the friendly confines of Hoerster Field on Saturday, Sept. 11, but Holecek is hoping to fill next weekend’s open date.

If the Ramblers do not play, it will cost them playoff points.

“There have been lots of cancellations (over the weekend) so it seems very likely now,” he said. “We’re crossing our fingers.”

St. Rita, meanwhile, will be traveling to Louisville, Kentucky, to play Trinity on Friday night, Sept. 3. The Mustangs went into the season ranked No. 1 in the metropolitan area by the Chicago Sun-Times but in their Aug. 27 opener on their home field they were upset 16-9 by 11th-ranked Mount Carmel.