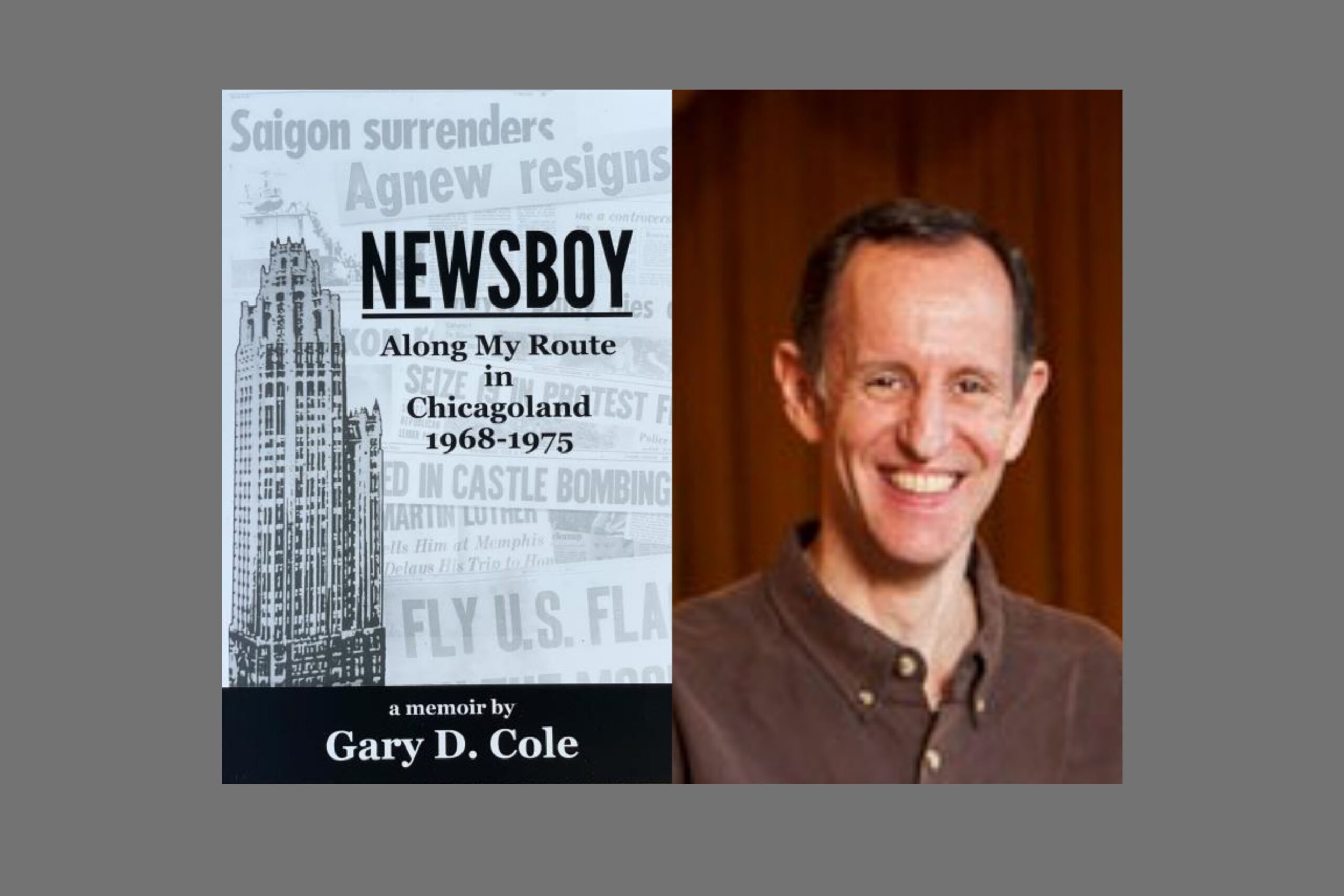 Try to imagine one of the young boys who lives down your block peddling his Schwinn up to your home early every morning — rain, shine or snow — then carefully placing the daily newspaper inside your front door screen.

For the middle half of the 20th century, that was not just a Norman Rockwell moment. It was a familiar ritual along the leafy streets of suburban America — and emblematic of the pleasant, predictable rhythms of life on the North Shore.

Winnetka native Gary Cole lived that moment, delivering the Chicago Tribune in the neighborhood around his home on Hill Terrace from 1968 to 1975, beginning when he was 8 years old. He has now written a coming-of-age memoir that takes the reader back to those days and to that experience.

“Newsboy,” as he puts it, “is a captivating chronicle of a child’s efforts to come to grips with the momentous stories he tracks in the Tribune through this turbulent period, including the collapse of the 1969 Cubs, the Chicago Seven trial, and notorious Illinois corruption scandals. The memoir is also an intimate portrayal of his route and customers, in particular the elderly residents of the Chimney Apartments, from a bygone era when paperboys came to the door of each subscriber both to deliver and to collect.”

Copies of “Newsboy” are available for purchase from The Book Stall in Winnetka. He is tentatively scheduled to do a reading there in September, on a date that will be on the store’s web site.

Proceeds from the book will be donated to the Chicago Headline Club in honor of the late Mike Royko, whose work Cole admired and who is featured prominently in the book. Rave reviews have been written by the Chicago Tribune’s Rick Kogan and the Sun-Times’ Rick Telander, two of Chicago’s most respected newsmen and cultural observers.

He then graduated from Williams College and Stanford Law School. His mother Ann still lives in Winnetka.

Cole practiced law in Portland, Oregon, the Central Intelligence Agency, and Covington & Burling, and founded a professional theater company. He was appointed in 2003 by the George W. Bush administration to head the $60 million annual grants program at the National Endowment for the Arts. The appointment was withdrawn, reportedly because of two of the provocative plays filmed by a theater video company he founded. Cole’s two previous books, “Artless” and “Black Box,” touch on some of those experiences.

Cole now lives in Chapel Hill, North Carolina. He and Amy Cole, his wife of 31 years, have two children.

Like most people, Cole has had his professional ups and downs. It was during what he termed a “rough patch” in the early 2000s that he decided to write “Newsboy.”

Between the failure of the theater company and controversy over the federal grants program appointment, “I was hurting, and I wasn’t sure what direction I was going to go.”

Writing “Newsboy” was “highly therapeutic. It allowed me to get away from the immediate pain,” said Cole, who spent the next 17 years on and off writing it. “It got me to a happier place. It got my mind out of the rut I was in. By and large those years were a very fulfilling period of my life. It was like transplanting my brain to a different reality.”

The paper route, always exclusively with the Tribune, typically included about 40 homes.

When allowed, he climbed the stairs of the three-story, 1920s-era, English Tudor-style buildings and delivered the paper to each customer’s door.

The Tribune required newsboys to collect money, service accounts, and even to attempt to solicit new accounts when someone moved or died.

At first, that presented Cole with what he called a “generational challenge” because most of the residents of what were then rental apartments were much older men and women. But that changed as he became increasingly comfortable talking to older adults. Some became what he termed “cornerstones of my childhood.”

“We didn’t have any relatives nearby,” he said. “They really became sort of surrogate grandparents for me, a source of guidance and wisdom. I learned a lot.”

It also created an important life lesson in how to mix business and pleasure.

“I had a business to run,” he said. “I had to collect from these customers. It was a wonderful education in how to effectively listen and ultimately steer the conversation in a productive direction. I was fascinated by these folks but I was also there for a reason.”

As Cole began to form connections with his customers, he made a point of reading the headlines of the papers he was delivering and trying to keep up with the fast-changing times.

He quickly realized that Winnetka was not at all like much of the rest of the world. The assassinations of Martin Luther King Jr. and Robert Kennedy, the Democratic National Convention chaos, Watergate — “on a daily basis, it was mind boggling.’’

The Olympics protest by John Carlos and Tommie Smith was another event that “made a huge impression on me.”

“When you grow up in an area you don’t know any different until you are exposed to something else,” Cole said. “When I started reading the paper, very quickly it occurred to me that the world was going to hell, compared to what I was living and experiencing.”

’’My customers became points of departure for the news,” he said.

For example, he enjoyed talking with a retired Air Force customer about the Vietnam War.

Looking back on that first job, and how it helped form his character, leaves Cole feeling slightly sorry for today’s 8-year-old would-be entrepreneurs.

“If you wanted to earn some money there was a real opportunity that paper routes afforded. That is an opportunity that kids don’t have anymore,” Cole said. “And because you had to collect, it became a means of interacting with another generation. That is a skill set — an affinity for people, when today you have so many people staring at screens — that is lost. When I went to collect from customers I had to look them in the eye. I had to stand on their doorstep for 5 or 10 minutes and hold a conversation and that is huge. That doesn’t exist anymore.”

One thing that does still exist is Cole’s affection for the North Shore.

“Re-engaging with Winnetka has been really meaningful to me,” he said.

That, of course, included a stop during a recent family visit to one of his favorite boyhood spots, Walker Bros. Original Pancake House.