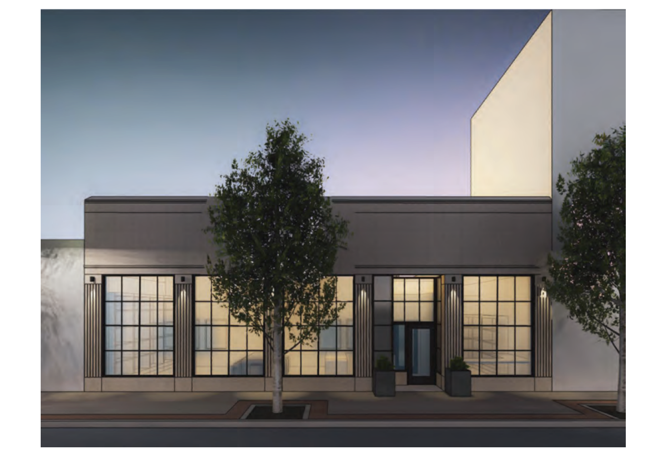 The Bahá'í faith is planning to reuse the office building at 415 Linden Ave. in Wilmette to house its national archives office. | Rendering courtesy of the village of Wilmette.

The religious organization behind Wilmette’s most well-known landmark is planning to restore a century-old building in the village’s 4th and Linden business district.

Wilmette’s Zoning Board of Appeals approved a request last month from Bahá’í National Center Properties that includes a series of variations, most notably one permitting the construction of a two-story addition to the existing building at 415 Linden Ave.

The building — which is more than 100 years old and has been owned by the Baha’i National Center Properties for decades — previously served as the faith’s office of communications.

Scott Conrad, manager of the National Bahá’í properties office, told zoning commissioners that officials would like to move the faith’s administrative office of the national archive to the Linden location, primarily because of its proximity to the house of worship located down the street.

The new space would house collections of interest to the public, Conrad said, noting that scholars, authors, artists and visitors would likely be interested in the archives.

“Our thinking is that the Wilmette location would be the place where things are that people want to see,” Conrad said, later adding that would include original drawings and models of the temple.

The proposed expansion adds approximately 700 square feet to the building. Much of that space would be used to house the collection, Conrad said.

The building already features a mezzanine but plans includes the construction of a new one to help deaden the sound of mechanical equipment used to preserve the collection.

A portion of the addition would be located above the existing first floor, according to village documents, and it will result in a total square footage of 8,580 feet.

Repairs to the front of the building would result in the ability to house a large reception room that could fit up to 40 people,and space for rotating displays, receptions and scholarship studies, Conrad said. The building would have a two full-time and one part-time worker.

The archives would be open to the public but interested visitors reportedly would need to first email before coming in.

A key motivation in reutilizing the office is that faith organizers would like to refurbish the basement of the house of worship, which is where a significant portion of the archives are now stored, according to Conrad.

Officials are hoping that more events could take place in the basement. Conrad also said that it needs updated life-safety systems.

Zoning commissioners unanimously approved the request, showcasing optimism that officials are trying to restore the building.

“I am personally excited by this proposal,” commissioner Maria Choca Urban said. “ … I think this is a new use that is consistent with an institution that is already in the neighborhood and is a major attraction for the village.”

The request will now head to Wilmette’s Village Board, where it will likely be up for review at the trustees’ Aug. 24 meeting.