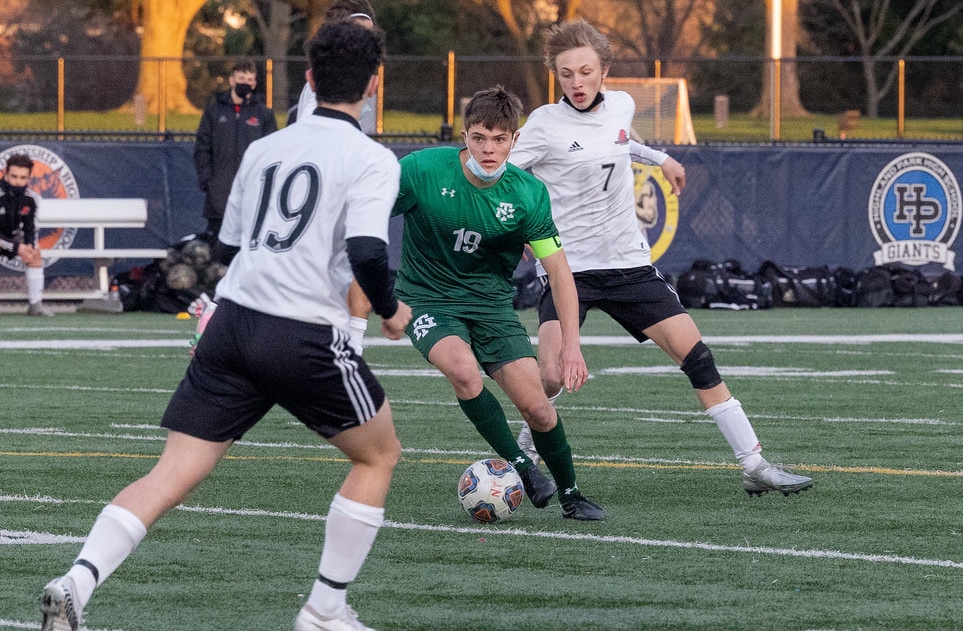 Jake Krueger carries the ball between defenders during a match his senior season. | Photo by Rob Lange Photography

Jake Krueger is a 2021 graduate of New Trier High School, where he was a captain for the soccer team. The Denison University commit recently helped his club team, FC United U20, to a national championship.

Every game I step on the field with my right foot first. Every game I do that. I don’t even know how it started. I just picked it up one day.

2. Why is Denison a good fit for you?

Mainly for academics. Playing soccer there was just a bonus. I was really excited when I visited. I have a couple teammates also playing there. It was the best option for me.

I guess the simple answer would be hanging out with friends and family. I do like to play other sports. I like to play basketball and I like working out, things like that. Normal teen stuff honestly.

Maybe an actor. I don’t know. I don’t really have an enacting gene, but I think it would be an awesome job. Live on movies; be a little bit of a movie star. That’d be pretty cool.

I would say hockey. When I was little I used to play. When I had to make a decision, I chose soccer. So hockey for sure.

6. If you’re in Walgreens with a couple bucks, what are your buying?

7. Who was the funniest guy on the New Trier team?

Probably Collin Donnelly-Maine. Everything he says is so funny. He makes a joke on anything. He always calls you out on little things.

I had a kidney disease when I was little. I don’t know if I grew out of it, but my kidneys got fully healed. That’s something most people don’t know.

10. What was it like winning a national championship with FC United?

It was awesome. I didn’t get to play with these guys much in the fall, but this was an amazing experience, playing with these older guys, some are juniors in college. The experiences helped me become a better person. They were all just amazing soccer players. … It was such a blast. I wish I could relive it, it was that much fun.