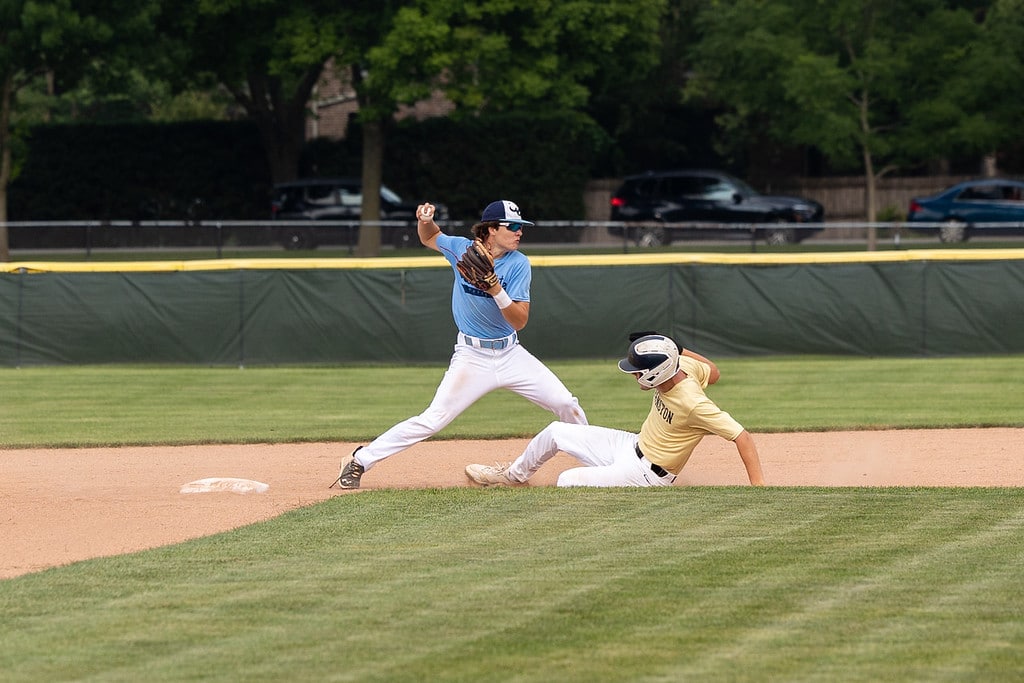 Summer flies by. It’s important to make the most of it, like the Wilmette Waves.

The Waves — a high-school-aged team made up of mostly New Trier High School players — cleared 38 games in 38 days, which is more games in fewer days than the Trevians (37 in 55) in the spring.

The competition onslaught came to a conclusion Wednesday night, July 28, when the Waves dropped a 2-0 contest to the Evanston Naturals in the championship game of the Illinois Summer Baseball League.

The ISBL consists of eight north-suburban teams that compete in two divisions. The Waves (22-13-3 overall, 12-4-3 ISBL) finished the regular season as the Blue Division champs and had the best record in the ISBL.

Loyola topped the Red Division at 10-7-1, but lost to Evanston 6-5 in the league seminfinals on Tuesday, July 27.

Wilmette downed Highland Park 10-0 in their semifinal matchup, thanks to a complete game from Jimmy Ertmann (6 hits, 6 K’s) and two RBI each from AJ Steinback, Louis Florida and Aiden Nicholson.

The victory set up a match with rival Evanston, who rode a strong pitching performance and runs in the first and fourth innings to the championship win.

“I thought their pitcher did a really good job keeping the ball down and away,” he said. “We were rolling over it and not taking the ball to right field. Evanston played really good defense. The game was well-played.”

The second-place finish did not dampen Napoleon’s feelings about the 2021 summer.

Napoleon was pleased to see 24 wins but happier to see a couple other things.

“Im ecstatic with how well we played and the improvement that went on,” he said. “That’s really what I’m looking for improvement and guys having fun. Those are two of the most important things.”

In terms of improvement, plenty of the Waves stepped up to the plate, starting with the Mastros brothers.

Graham and Jack Mastros, who were part-time Waves, led the team from different sides of the ball.

Jack, who played limited weekdays, had a 0.389 earned-run average before allowing one run in the championship game.

Graham, also in limited time, hit close to .600 in league play with a 1.573 OPS (on-base plus slugging) percentage, while leading the ISBL in RBI (14) and runs scored (15). He won the league’s Silver Slugger award and was named to the All-ISBL Team with teammates Steinback and Sam Gossard.

“(Jack and Graham) are great kids; their parents are great. I can’t say enough about them,” Napoleon said. “Graham is a very busy guy. To devote three days a week with us — the kid is only 16 years old — hehad to be dragging a little bit, but he came to play every day. It was good to see and a great attitude by a kid.”

Napoleon also had his own awards to give, as the Waves hold an honors night every summer to celebrate the season.

Steinback was name the team’s MVP, after hitting in the “high .300s” and pitching for the Waves.“He played both corner outfield spots for us and was just a leader, a quiet leader,” Napoleon said.