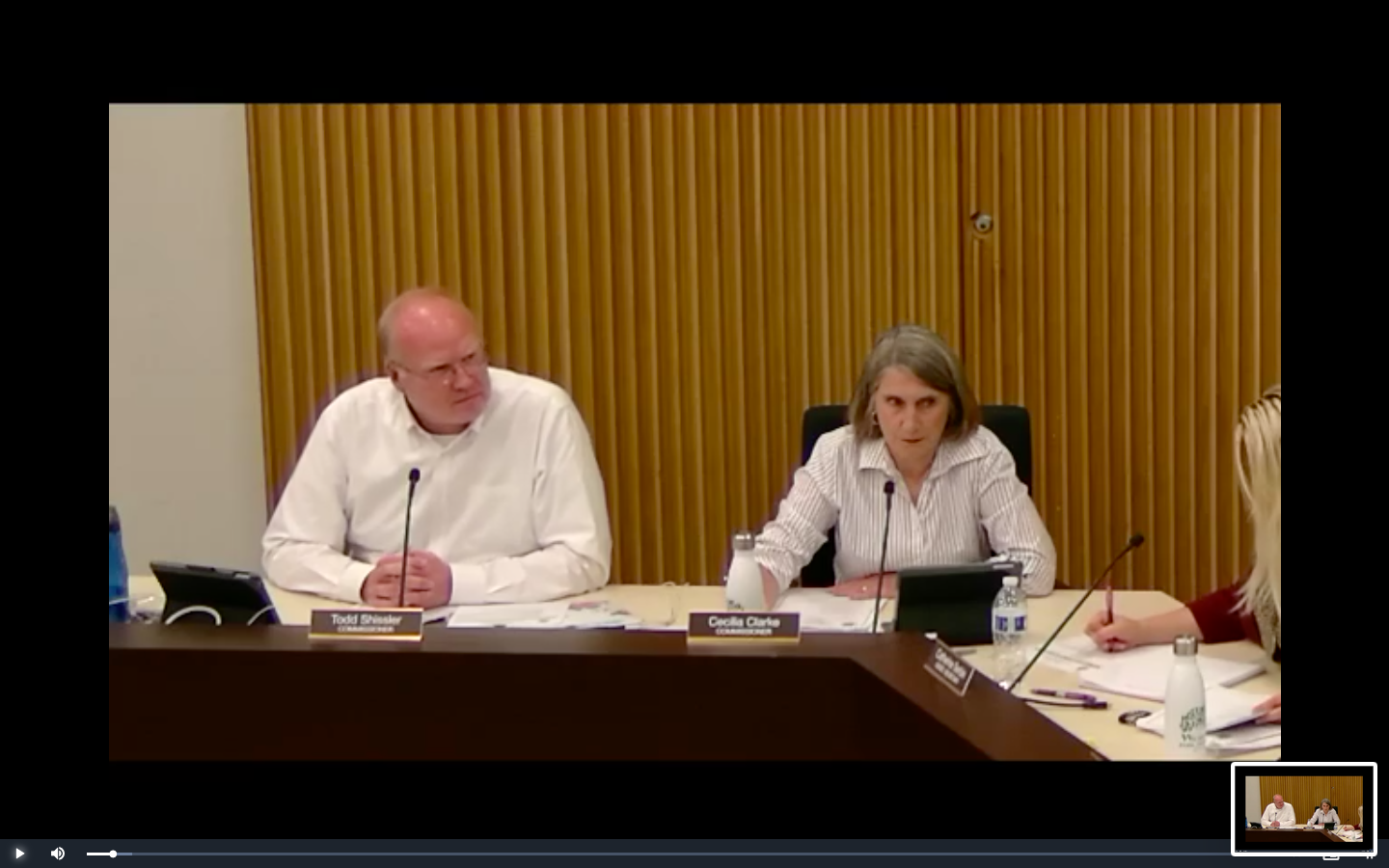 Commissioners Todd Shissler (left) and Cecilia Clarke at the board meeting Monday, June 12.

Toward the end of a Wilmette Park Board meeting Monday, July 12, commissioners and board attorney Andrew Paine reviewed procedures for a commissioner vacating the board, including how the board would, if necessary, replace that commissioner.

The only problem was there is no commissioner announcing a possible departure.

During the span of the discussion, Board President Mike Murdock opened the floor to any commissioner who wanted to speak up in regard to a potential vacancy. No one did.

Commissioner Cecelia Clarke invited the agenda item for what she called rumors in the community and inquisitive letters to park district staff regarding an impending vacancy on the Park Board.

“There’s a rumor that a board member will be leaving us and there has been consternation in the community as to a replacement,” she said to her fellow commissioners.

While that board member was not announced during the July 12 meeting, first-term commissioner Todd Shissler’s home is pending sale, according to public information. Shissler was the only commissioner not to participate in the board’s vacancy discussion Monday.

According to an online listing from real estate firm @properties, the Wilmette home of Todd and Jane Shissler in the 1300 block of Ashland Lane is “contingent.” The home’s agent, Shelley Shelly, a former Park Board commissioner, confirmed to The Record that the home is “under contract” but would not provide information about a potential closing date.

Despite the home sale, The Record has no information that confirms Shissler is planning to leave the Park Board. He did not return multiple phone and email messages from The Record.

Community interest in the Wilmette Park District and Park Board is high. During the 2021 election, nine candidates sought three open Park Board seats, which were won by newcomers Allison Frazier, Patrick Duffy and Kara Kosloskus.

Finishing fourth in the April election was two-term incumbent Bryan Abbott, who told The Record he was contacted by a park commissioner about a board seat being vacated by Shissler.

Since the board’s new construction, there have been two 4-3 votes. In them, Shissler has voted in unison with president Murdock, Duffy and Kosloskus, forming a majority.

At the meeting Monday, the board’s attorney detailed some of the reasons a vacancy may occur, including a change in residency; however, Paine said it is not that simple.

A board member’s residency status reportedly is an issue of intent, and a commissioner must “abandon” his or her Wilmette residency to be disqualified for a board seat, Paine said.

“If a commissioner were to move, they would not have abandoned their seat until they live somewhere else other than Wilmette and do not intend to return,” he said.

In the case of a vacancy, the Park Board would confirm a replacement via a majority vote of the remaining commissioners, Paine explained.

Current board documents, Paine said, ask the board to publish the vacancy, seek applications and conduct interviews for the open seat. Those criteria, however, are not statute and could be altered by the board, he said.

Commissioner Allison Frazier asked if the vacancy needed to be official before the board began the replacement process. Paine answered that the board could begin a process as soon as it was aware of a pending vacancy.