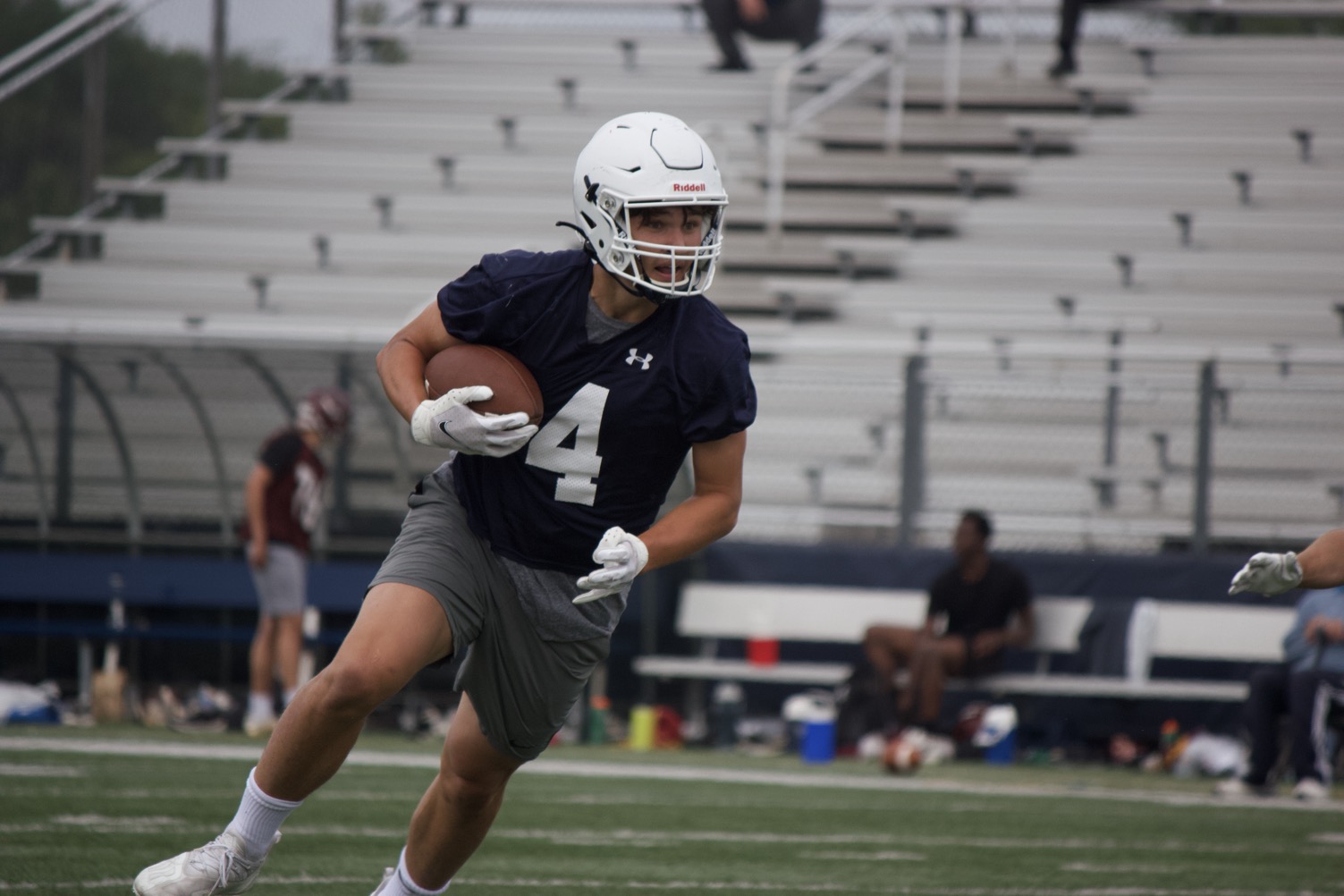 Though the high school football season is five weeks away (45 days, but who’s counting), two of the area’s most-talented programs are giving a glimpse of what the upcoming campaign will look like.

New Trier and Loyola Academy — teams that went a combined 11-1 in 2021’s spring season — squared off in 7-on-7 action Monday, July 12, at the Trevians’ Northfield campus, with both teams displaying talented, deep rosters.

The return of 7-on-7s brought with it more than offseason preparation for the two programs, as the summer scrimmage allowed for a sense of familiarity after an abbreviation and unusual season that took place earlier this year.

“It’s different … (but) facing other teams is really good for us,” Loyola head coach John Holecek said. “You get tired of seeing the same looks and the same personnel. It’s fun and you learn a lot. It’s one of those things that you kind of take for granted. We wish we had a couple more.”

New Trier built its success last season on the back of a dominant, experienced defense that stymied opposing offenses, but the Trevians head into next year featuring an offensive unit rich with returning starters.

The Trevians have two talented options at the quarterback position, as returning starter Nevan Cremascoli, a senior, and newcomer Graham Mastros, a junior, are battling for the starting job.

“We’ve got a nice little battle going on with Nevan and Graham now,” Trevs coach Brian Doll said. “Nevan has obviously played a lot of games but to have another kid coming up who is so capable is really a nice sign for us. It gives us some depth at quarterback.

“A lot of people don’t have two kids competing at that level and so it’s nice to have kids going back and forth and this is their first 7 on 7 that they’ve been at together. So it pushes each other and that is what I kind of tried to stress at the end: The further we can push each other and make each other better just makes us deeper as a team.”

Doll said he has not yet named a starter at the position, noting the coaching staff wants to go through “the whole summer and give both kids an equal opportunity and let them fight, compete and battle it out.”

Cremascoli and Mastros shared reps Monday, with both authoring scoring drives and showing off their ability to pass in and outside of the pocket.

New Trier will need to replace one of the program’s greats at the running back position, as former standout Bordy Roth graduated earlier this year.

The leading candidates to do so are currently Jackson McCarey, Jackson Ochsenhirt and Jack Cummings, Doll said.

The Trevs bring back an array of talent at the receiver and tight end positions, highlighted by returning starters Finn Cohan, Josh Kirkpatrick, Alex Mendes and Cummings.

Cohan, who missed a portion of last season due to injury, impressed Monday, catching multiple touchdown passes while flashing his unique combination of size and speed.

Doll believes the talented, returning core of offensive weapons will be an immense advantage for the unit.

“We have two quarterbacks who can throw it right now and we have a lot of really good weapons at receiver,” he said. “So for the first time in a long time, I don’t think it’s going to be a surprise to anyone, we’re going to be more balanced than run-heavy. … That’s good for us. I think that will really keep teams on their toes knowing that we really have a balanced attack.”

Doll said there’s “still a lot of questions” but that he is most impressed with the defensive line right now.

“Our defensive line is pretty special and stronger than I can remember in year’s past,” he said. “I think that is the strength of our defense right now.”

Senior Charlie Zieziula will return to anchor the line alongside newcomer sophomore Ty Stringer, who is earning rave reviews this offseason. Nate Morhaim is also expected to be a key contributor at the position.

Henry Wolf, Cummings, Cohan and Mendes are penciled in as options at the linebacking position right now, Doll said.

The Trevians’ defensive backfield will likely include Charles Olges, Ochsenhirt, Brad Johnson and others.

New Trier will open the season on Friday, Aug. 27 at Lyons Township High School, which went 2-2 in the shortened 2021 spring season. The program’s goal, as always, is to start with an opening-week win.

“Our goal is to win the first game,” Doll said. “That is one of the things that I put on the board when I first got hired here: win the first  game. I think it just sets up your season. We’ve been very fortunate since I’ve been here to win a lot of first games and so we want to continue to do that.”

The Trevians are also excited to welcome a full house of fans once again as reduced fan capacities that were part of last year are no longer present.

“Our coaches have been excellent, everyone has been in a really positive mood,” Doll said. “The school has been amazing and supportive through all of this transition. We’re just excited for the stands to be full and people to be back at games. I think this place is going to be rocking in our first home game.”

Replacing arguably one of best rosters in school history is no easy task — but the Ramblers are up for the challenge.

Loyola dominated opponents en route to a perfect 6-0 season, finishing the campaign as the no. 1-ranked team by nearly every media outlet. But with the immense success last year comes some uncertainty for the time being.

“It’s a large group, we have over 120 players right now, but we’re still trying to find our way; we lost a lot of seniors last year,” Holecek said.

Many of the Ramblers’ offensive leaders from last year are not returning but running back Marco Maldanado is back and with a heightened role in the absence of star Vaughn Pemberton. Holecek described him as a “special, scholarship-type player.”

Loyola will look to quarterback Jake Stearney to lead this year’s offense. Holecek said Stearney is “going to be a steady hand and very good talent.”

The positioning group that stands out for the Ramblers is the program’s tight ends, Holecek said, noting that Jack Fitzgerald — the son of Northwestern football coach Pat Fitzgerald — and Jack Parker will be key contributors.

Roger Simon, Declan Ford and Danny Collins are slated as strong options at wide receiver, according to Holecek.

The Ramblers offensive line “should be formidable,” said Holecek, noting the group’s size.

Loyola’s longtime coach said the team’s defense “is still a work in progress.”

“We have to find the right personnel that can compete against the major talent in the Catholic League,” he said.

Two anchors of the defense will likely be returning  interior defensive lineman Mike Williams and the versatile James Kreutz.

Will Maheras and Quinn Nimesheim are expected to be key parts of Loyola’s secondary.

The Ramblers will use the next several weeks to ramp up preparation efforts.

As the season inches closer, Holecek’s message to the group is simple.

“Be a good teammate, learn your position, and absolutely take care of your job first,” he said. “If they all do that, then we’ll be successful.”