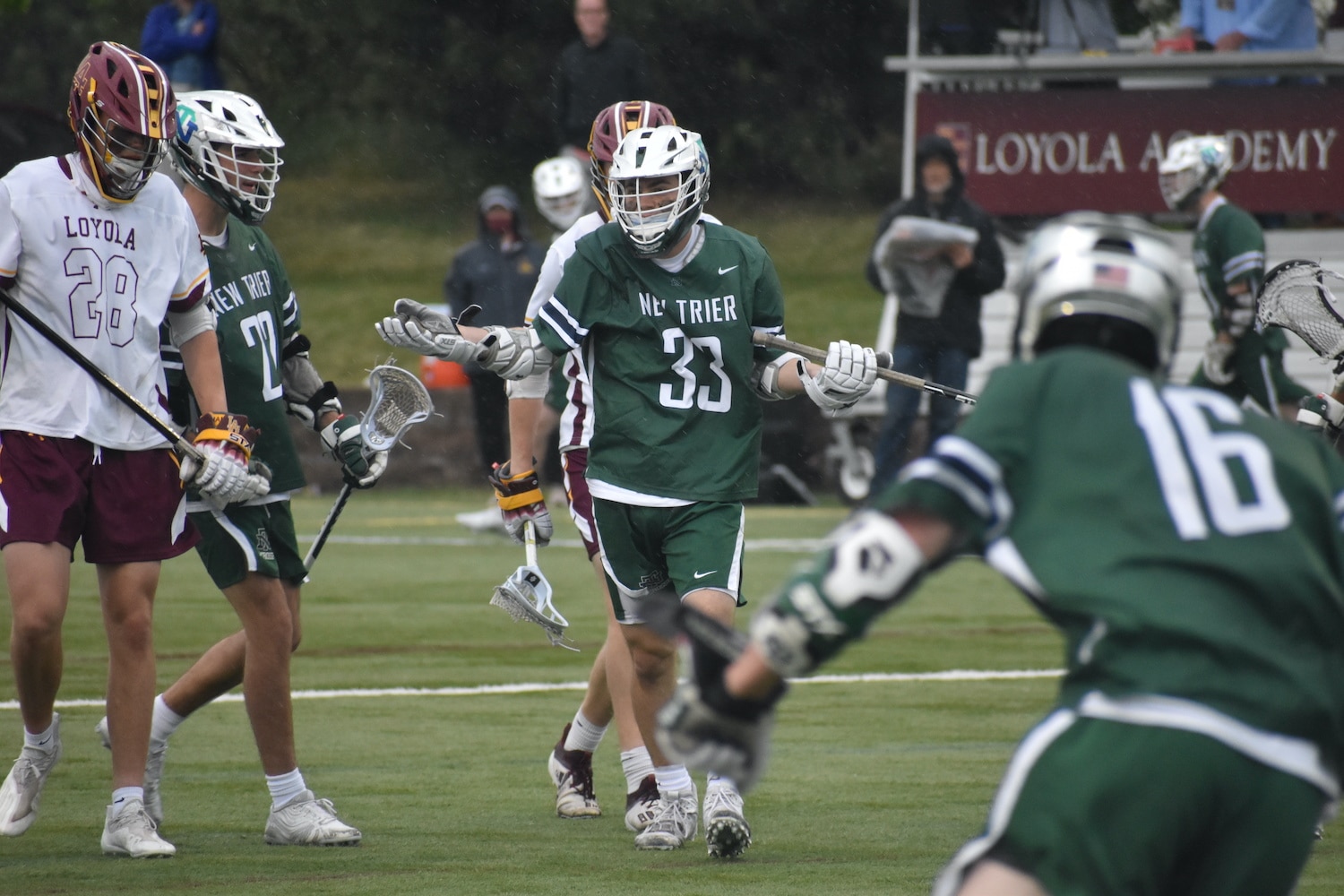 Jesse Shapiro is a recent graduate who played midfielder for the Trevians boys lacrosse team. He was a major contributor to New Trier’s sectional title-game appearance.

1. Do you have any pregame rituals or superstitions?
I look at my helmet, which has a little sticker on it that says KTFB, which stands for “keep the fires burning.” It’s a slogan of the overnight camp I went to and I’m a guy who gets nervous before games, so whenever I look at the sticker, I always think about the times I’ve spent up there with my best friends and it calms me down before a game.

2. What are you doing next year?
I’m playing lacrosse at Williams College and I’m super excited. It really seemed like the perfect fit for me, both athletically and academically. It’s a place where I know I’m going to be challenged in every facet of my life, but I can’t wait to be in an environment with a super-diverse group of people and really pushed to be the best version of myself.

3. What is your favorite sports memory so far?
Obviously winning the state championship my sophomore year was a big one but another one is we play some really competitive games, and in those games we’re not playing too many guys, but when we play the other games and one guy on the team who’s maybe lower on the depth chart, when they’re able to score a goal and it’s their first-career goal, when they come off the field, that’s really the best moment because you get to see the pure joy and everything coming together.

4. What is your favorite thing to do off the field?
Off the field I actually have a lot of interests. I actually broadcasted the varsity basketball and football games for New Trier and I also have a podcast of my own, so I like to stay busy. I also like to play some board games too virtually with my camp friends. When my brother’s home from school, I love hanging out with him and watching TV.

5. What is your dream job?
I’m not really sure yet what my dream job would be but hopefully I would be in a position where I can make the world a better place while also earning enough so I can travel around. Really, something that makes me happy and I’m passionate about.

6. If you could travel anywhere, where would you go?
Hands down, I would go to Modena, Italy, to eat at Massimo Bottura’s restaurant Osteria Francescana, which is one of the best restaurants in the world. We’re big foodies in our family, so to go there would be an absolute dream.

7. Do you have a favorite athlete?
Honestly, Paul Rabil. I think he’s a guy in lacrosse who people sort of tarnish his name a little bit, but I got into lacrosse because I watched his YouTube videos. I think his impact on the game and my life has been tremendous because I watched all his YouTube videos and he created the Premier Lacrosse League (PLL). It’s super inspiring that someone like him has taken control and wants to make the sport of lacrosse in the forefront of all sports.

8. If you are in Walgreens with a couple dollars, what are you buying?
I’m vegan so I’m going to get anything in Walgreens that’s vegan.

9. What is something people don’t know about you?
That I have seen every single “Survivor” episode ever. There’s 40-plus seasons and I broke my ankle in sixth grade and I think I watched every single season throughout those few months that I was in crutches.

10. What was it like competing in this unusual, challenging year?
It was super interesting and obviously it didn’t end up the way that we wanted. We were hoping for a state championship but with everything going on, I thought from a team camaraderie standpoint, we were really able to come together and I formed such great relationships with the sopohmores and freshmen that were on the team. While we didn’t walk away with a state championship, I did walk away with 20 new friends for life. I think that personally this season was up and down for me. I questioned whether all the work I put in the offseason would translate on the field; there were times that I doubted myself. But I’m proud of the way I finished the season personally with my performance in the game. It’s a lesson that you never know when the work you’re putting in will actually translate to what’s going on, it will eventually happen. I’m grateful for that.