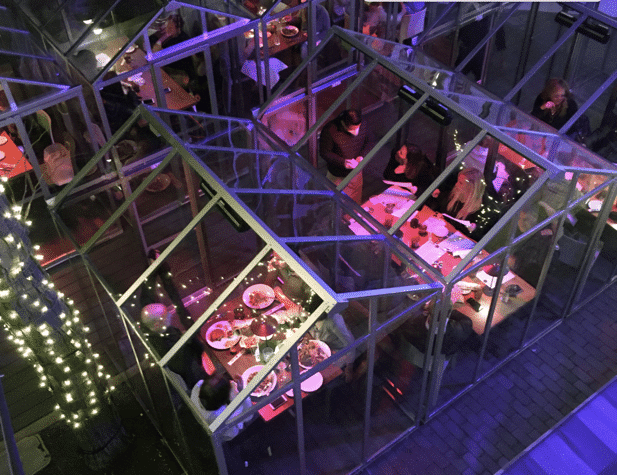 Amid flourishing patronage and unprecedented pedestrian traffic, Glencoe officials are wrestling with a “complicated issue” in the village’s downtown area: the possibility of year-round outdoor dining on public property.

Trustees discussed the matter at length during the Village Board’s Committee of the Whole June meeting, reviewing Glencoe’s current outdoor dining programs and potential options to alleviate some existing concerns.

Before the onset of the COVID-19 pandemic, Glencoe allowed downtown restaurants to have sidewalk seating through the Village’s outdoor seating permit process, officials said. Those yearly permits annually lasted from April 1-Nov. 30.

In late 2019, Village officials allowed Hometown Coffee and Juice to have outdoor igloos on public sidewalks, creating a precedent for restaurant use of publicly-owned property.

Glencoe officials started developing strategies to assist restaurants through the early stages of the pandemic in mid-2020, eventually expanding the use of public property to downtown restaurants for outdoor dining and curbside pickup.

Guildhall is currently using seven parking spaces total, four permanently for its greenhouse structures, and three for temporary carryout. Valor is using eight, five of which for its outdoor seating.

Several downtown eateries have expressed interest in continuing to use village parking spaces, which are publicly-owned property, past the summer and fall outdoor dining season.

Although the board expressed a consensus toward continuing outdoor dining programs on public property for the short-term future, a number of concerns have trustees considering long-term viability.

Chief among those concerns is parking — an issue officials say has plagued downtown Glencoe for decades.

Additionally, 10 locals submitted comments to the Village opposing some fashion of permanent outdoor dining in publicly-owned space in Glencoe.

Several residents critiqued the appearance of the outdoor seating structures in their public comments. Barney Gallagher, a resident of Green Bay Road, called them “visual clutter.”

Multiple business owners also weighed in on the matter, saying the policy favors restaurants over other businesses.

Mark and Terry Ross, the owners of J. Terri Ross Hair, said officials don’t realize “they are robbing Peter to pay Paul.” They attributed the loss of several clients and employees to parking problems near their store, which is located at 660 Vernon Ave.

But local restaurant owners are urging the Village to extend current licensing agreements beyond the end of November and allow them to continue using the public parking spaces.

Jeff Shapack, the owner of Guildhall, told the board that the restaurant invested $100,000 in its outdoor dining structure, crediting it as a key factor in its ability to retain all its employees and remain open throughout the pandemic.

“We believe by making this investment it allows us to be able to continue to serve the community both indoors and outdoors,” he said.

Shapack said there are a total of 345 parking spaces available in Glencoe’s downtown area, which was later confirmed by Village officials. He noted that Guildhall’s greenhouses occupy four of those spaces, or 1.2 percent, while the pick-up, evening-only curbside spaces occupy three.

“It’s our opinion that even with the pandemic, and now coming out of the pandemic, that downtown Glencoe is flourishing more than ever,” he said. “We believe that food and beverage is what is driving that. It’s the beating heart of the business district. … It’s very important that we continue to maintain what we have.”

Village officials said staff is in the process of reviewing the downtown parking environment and will present and update on that topic at a future meeting.

No trustee stated the desire that action on removing the use of public property should be taken immediately, meaning Glencoe’s current outdoor dining environment will likely remain intact until at least November.

The impact of Glencoe’s outdoor dining on the town’s vibrancy, and the revenue it has generated, was noted by several members of the board.

Trustee Jonathan Vree called the downtown area “more vibrant than it’s ever been.” He also said sales tax revenue from the village is as high as it’s ever been.

Roin said “(Glencoe) looks great,” adding, “it hasn’t looked this good ever.” But he noted that parking and pedestrian accessibility are fair concerns that also need to be addressed.

The board will revisit the topic at a future meeting in the coming months, officials said.