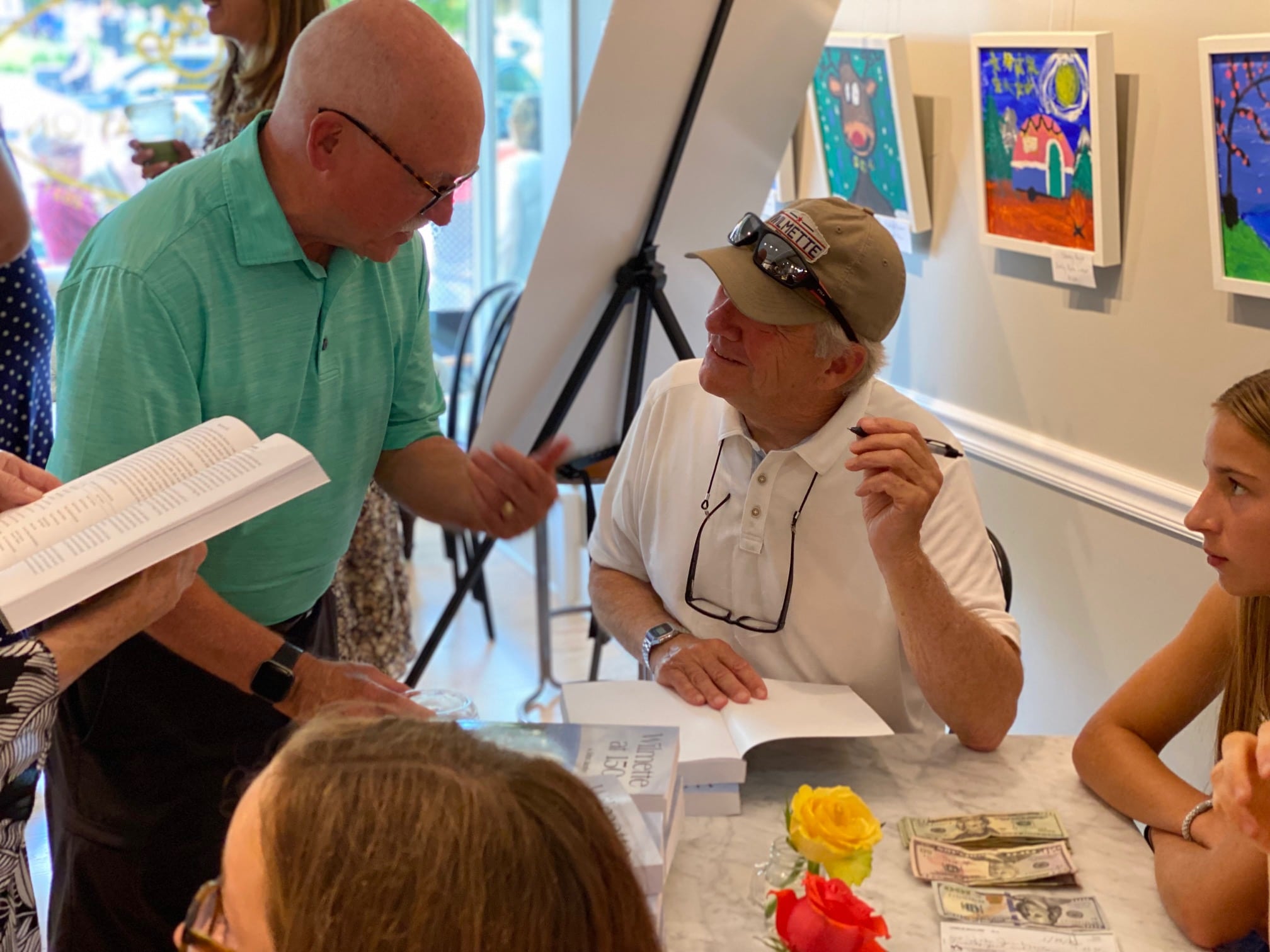 John Jacoby (right) is the former Wilmette Village president and now author of "Wilmette at 150." He is pictured with a guest at his book signing Sunday, June 27, at Central Station Coffee & Tea. | Photo Courtesy of Central Station

A who’s who of prominent and influential local citizens who have participated significantly in the civic life of Wilmette at various times over the past 50 years gathered Sunday, June 27, at Central Station Coffee & Tea to celebrate the unveiling of “Wilmette at 150,” a book by longtime resident and former Wilmette Village President John Jacoby.

Jacoby described the compilation of hundreds of meticulously reported and fact-checked stories as a “tapestry” that “reveals Wilmette as a place of achievement and failure, joy and sorrow, kindness and callousness, service and apathy, love and prejudice — all of humanity’s virtues and frailties.”

Wilmette native Chris Canning, who served as Wilmette Village President from 2005 to 2013, said of his effort: “John and I have talked over the years about his love of history and love of history in Wilmette and the fact that (he) is willing and available to chronicle that is important.”

The stories cover a wide range of topics, such as Dr. Martin Luther King’s visit to the North Shore, the German POW camp in Harms Woods, the colorful history of No Man’s Land, a litany of hometown homicides and drownings, the Palm Sunday tornado that heavily damaged the Village Center, the perseverance of world pushup champion Chick Lister, and Public Enemy Number One Baby Face Nelson’s demise on Walnut Avenue.

Heidi Voorhees, who was Wilmette Village Manager from 1990 to 2001, characterized the book this way: “Anyone who ever thought of Wilmette as a sleepy suburb will have a vastly different perspective.”

“The book gathers together so much stuff I never knew and I’ve lived here 45 years,” she said.

Chick Kennedy, who surveyed a portion of the roughly 200 people who attended the book-signing event, was ringing with pride.

“These are people who have given to the community so unselfishly and so objectively and haven’t had an agenda. People like John Jacoby have always felt that the good of the community comes first. It makes me very proud.”

Jacoby, who was Village President from 1989-1997, said he hopes the book will do more than offer an entertaining read.

“My hope is that this book will promote unity among Wilmette residents,” he said. “I do believe that when people are aware of a shared history and they have something in common, that can become the basis for establishing relationships. No one knows what challenges will arise in the future, but I’m confident that the village will meet them successfully if unity is the underlying principle, as I that been for most of our history.”

Unity was very much on Jacoby’s mind when the selected an aerial photograph of the Baha’i House of Worship for the cover of the book.

“They have done a lot of unity work over the years,” he said.

Likewise, Jacoby selected the 1996 logo of the Wilmette Human Relations Commission to be illustrated on the back cover.

“It was designed as a call for unity of people of all races,” he said.

Elaine Fandell, the longtime editor of the Wilmette Life, had a front row seat for much of the political and social evolution of the village.

“As the editor, I found myself having to look into corners that people didn’t want looked into but I was glad I did because it created some improvements,” she said.

Jacoby spent much of the pandemic year compiling the book, using the Wilmette library’s newspaper collection, many online sources, and the 500-plus columns he wrote for The Wilmette Beacon from 2010-2020.

A special impetus, he said, was the fact that the village will be celebrating its Sesquicentennial in 2022, and he wanted to contribute to the institutional memory of the community.

“A lot of the stories in the book had been lost,” he said, and he felt it was important to get them on the village’s permanent record.

Patrick Leary, retired longtime curator of the Wilmette Historical Museum, urged all Wilmette residents to read Jacoby’s book and others like it.

“It’s a way of putting your roots down in the village,” he said.

Leary added that history is being updated all the time.

“There are new sources, like genealogical records, and we are learning new things all the time.”