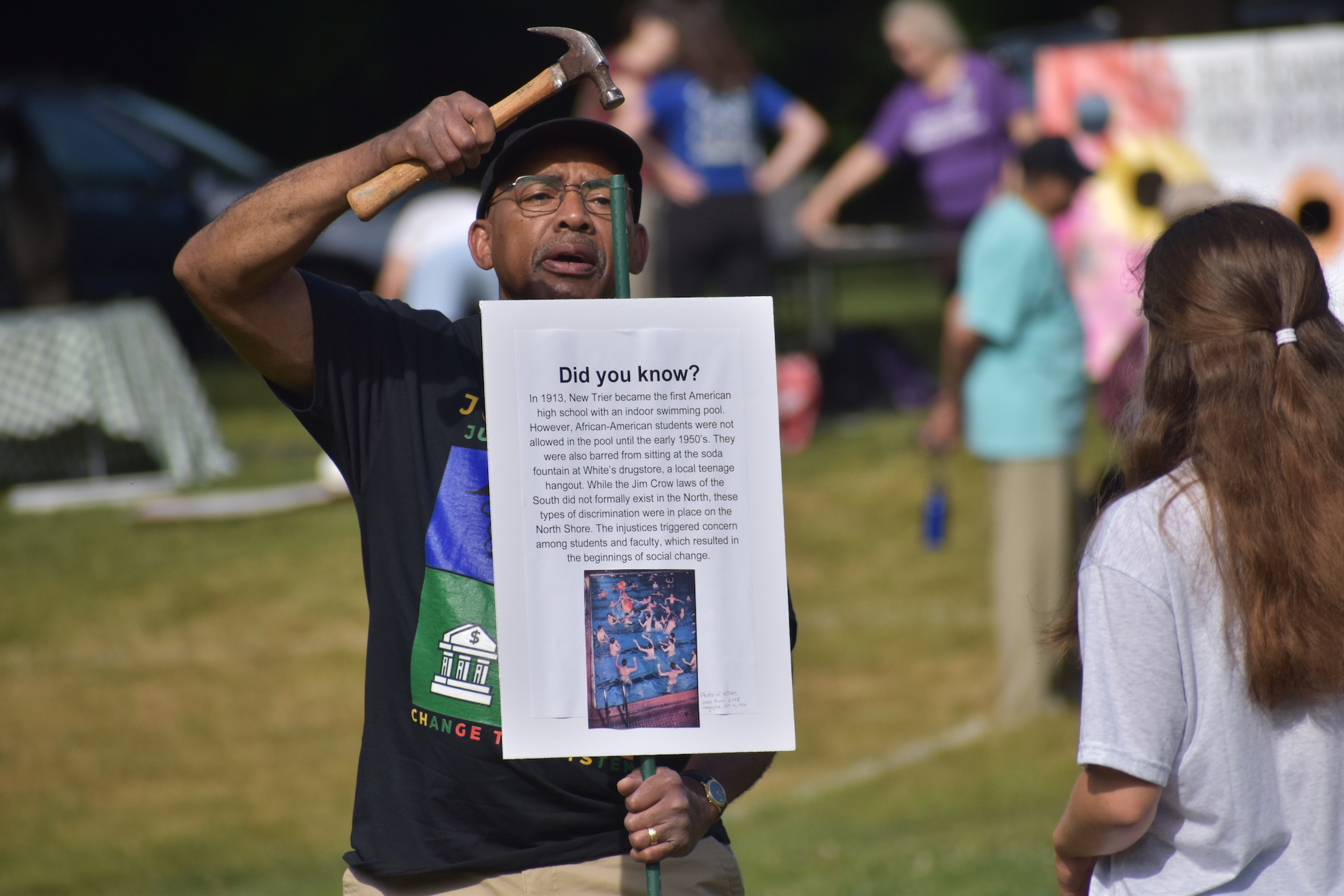 Roger Williams, a member of HEROS, puts up a sign detailing the segregation in New Trier High School after its pool was opened. | Photos by Joe Coughlin/The Record North Shore

Peter Ohr looked over all the people on Winnetka’s Village Green and smiled.

It wasn’t just that they had gathered to support diversity and inclusivity on the North Shore, but that no authority asked them to do so.

“Amazing that this was all grassroots,” said Ohr, a Wilmette resident. “Just people getting together. There’s no real structure, just people concerned about these issues.”

The gathering on Juneteenth — Saturday, June 19 — was the culmination of a series called “Hidden Stories of the North Shore,” programming dedicated to speaking truthfully about the racial history in New Trier Township.

It was no accident, of course, that the climactic event was held on Juneteenth, the national holiday that celebrates the end of legal slavery in the United States.

The educational series was organized by the resident group HEROS, or Healing Everyday Racism in our Schools. To punctuate the program, community member and organizations united on the Village Green around social-justice issues.

In between sets of live music, a handful of speakers spoke to their neighbors about equity progress in the area.

Event organizer Jennifer Lind talked about the necessity to confront the past, especially when it is uncomfortable, both to learn from past injustices and to acknowledge those injustices for those affected by them.

Pat Savage Williams, an educator at New Trier High School, said “roadblocks” to achieve such goals exist in the area in the present, as well.

“We didn’t even know if we’d be here today,” she said, referencing difficulties organizing the gathering.

Diversity-based committees within area school districts — such as Kenilworth D38, Wilmette D39 and Winnetka D36 — were present and a multitude of local high school students participated in the day’s activities, such as posting on fenceposts a series of historical facts about the area’s intolerant past.

Glencoe Park Board commissioners plan to debut a draft concept plan on Tuesday, Aug. 3, during a special community meeting. Commissioners will…

By Martin Carlino | 23 hours ago

Photographs of a snake slithering across Gillson Beach wrangled residents’ attention on social media in July. But those who saw the…