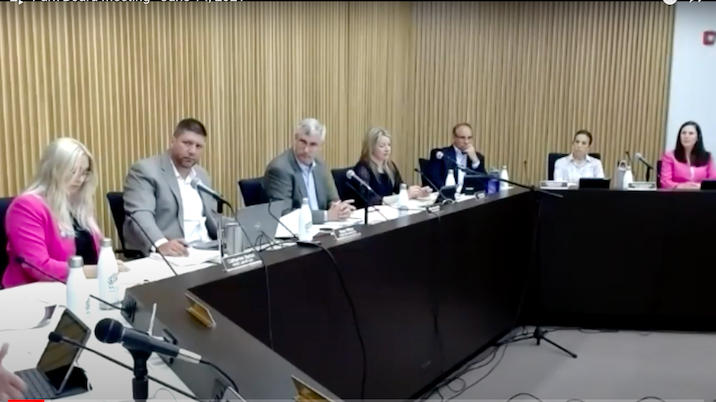 The Wilmette Park Board discusses committee changes during its meeting on Monday, June 14.

(Editor’s Note: Many quotations featured in this report were collected in the days following the meeting on Monday, June 14. The audio of the meeting’s livestream and its recording was difficult to interpret.)

Voting lines were confirmed at Monday night’s Wilmette Park Board of Commissioners meeting.

A month ago, the Wilmette Park Board voted in a 4-3 split to elect Mike Murdock as its president. On Monday, June 14, the same split approved Murdock’s measures to restructure the board’s committees, which now include seven committees

Voting in favor of Murdock’s changes were Murdock, Todd Shissler, and newcomers Kara Kosloskus and Patrick Duffy, and against were board vice president Julia Goebel, Cecilia Clarke and newcomer Allison Frazier.

Goebel was also backed by Clarke and Frazier in the vote for president in May.

The tension was palpable in board chambers as Clarke and Goebel questioned Murdock’s motivations for the committee changes.

The changes were included on the board’s consent agenda, a new feature championed by Murdock in an effort to streamline the meetings, he said.

Goebel removed the item for discussion and later told The Record she felt it important to discuss the proposal in public.

“The root (of the item removal) is our highly engaged community,” she said. “We received feedback that the processes can be more understandable and more transparent. It’s important to bring along constitutes when making changes.”

Murdock told his fellow board members that his goal for restructuring was to spread out the “cumbersome” Parks and Recreation Committee’s responsibilities to the new Facilities Committee and to start the process of matching board operations to the board’s operating document.

Saying that the board’s previous leadership did not adhere to the document, Murdock said doing so should be “one of the board’s highest priorities.”

Board attorney Andrew Paine said that as currently written the document is problematic. To solve the issue, he said, the board can either amend its practices or amend the document.

“There’s some stuff that is vague, some stuff that conflicts and frankly, some stuff that doesn’t make a whole lot of sense in the way park districts operate,” Paine told the board members. “… That’s one of the reasons we talked about addressing these bylaws and figuring out how does this board want to operate. Once you guys figure that out, we can make the bylaws match the operations.”

The Facilities Committee reportedly appears in the document as the “Centennial” committee and was identified during the document’s development as an important committee, but it was rolled into the Parks and Recreation Committee within the last five years, according to Steve Wilson, the park district’s executive director.

Recently, the Parks and Recreation Committee has had more on its plate, Wilson said. Murdock echoed the sentiments, saying his experience over the past two years as chairperson of the committee led him to the idea of again splitting it into two.

Murdock said “in hindsight” he should have waited, but Paine said the Facilities meeting did not run against any bylaws.

In all, Murdock is an active member on three of the Park Board’s seven committees, a break from precedent and the bylaws, which tab the sitting president as an “ex officio” committee member who is not obligated to participate in the meetings.

In a followup email to The Record, Murdock said:

“During my first term (2009-13), the president was a member of every committee and eligible to vote on any matter that came before any committee,” he said. “And those presidents did.  … As to why recent presidents did not, I heard references that ‘the rules had changed’ but you would need to ask those past leaders.”

Wilson, however, could not confirm those details.

“I don’t recall a time when a sitting board president was active on committees other than the Real Estate Committee,” he told The Record in a followup call. Wilson has been executive director since 2010 and a park district administrator since 2007.

With the restructuring, the board’s Real Estate Committee is now the only committee with four members. They are Shissler, Duffy, Murdock and Kosloskus, who is its chairperson — the four board members who voted for Murdock as president and for the committee rearrangement.

In a followup email, Murdock said he “decided it would be best if the three real estate professionals (Murdock, Shissler and Duffy) were on the committee. I made Kara the chair because I felt it was important that every commissioner had a leadership position and that was the one she was most comfortable with.”

Wilson said the Real Estate Committee has not met in years and “only meets if there is property to purchase or sell or a lease to negotiate — bigger topics that don’t happen every day.”

Wilson was unaware of any current items before the Real Estate Committee. Murdock, a real-estate investor who owns Chestnut Properties, said he’d like to have the committee prepared in case an opportunity arises.

Also at the June 14 meeting, Murdock and board members sparred over other proposed changes, including switching the regular schedule for the Park Board meetings.

Currently, meetings are held the second Monday of each month, barring special circumstance, such as a holiday, Wilson said.

Murdock proposed the change, he said at the meeting, because a board later — who The Record confirmed is Kosloskus — has a conflict on the current schedule.

Goebel and Murdock also discussed amendments to the minutes of the board’s last meeting, in which Murdock was elected president and called the current board “divided” and inexperienced.

Goebel wanted to strike the statements from the record, while Murdock wanted his wording corrected.

To give staff time to edit the minutes, the board decided to table the discussion with a 6-1 vote. Murdock dissented.