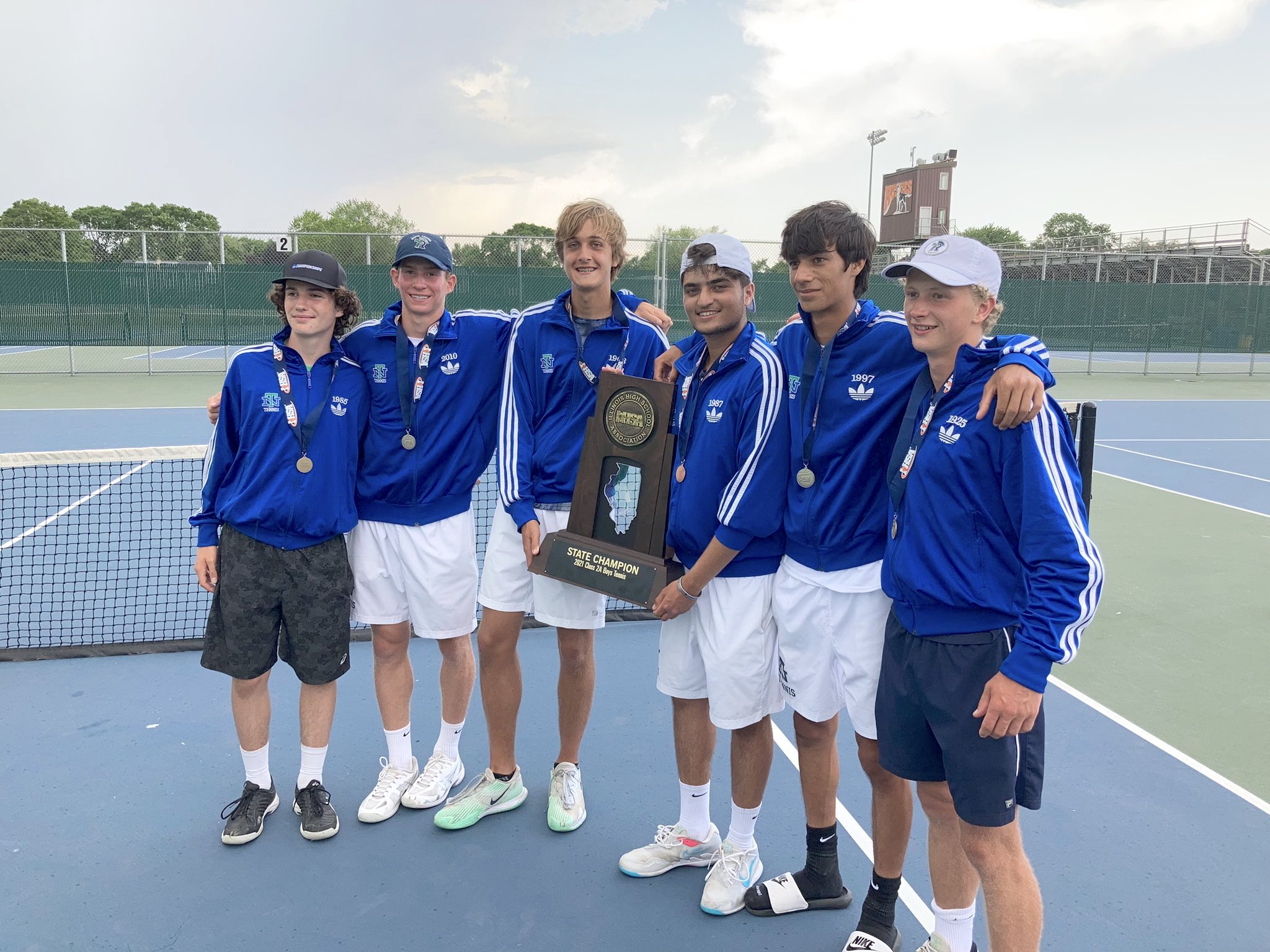 New Trier boys tennis players enjoyed a team dinner June 9 before competing in the state tournament, but they still went to bed hungry.

The past three seasons — 2017, ‘18 and ‘19 — the Trevians finished second in the IHSA finals to Hinsdale Central. They wanted more.

That hunger fueled a masterful three-day performance Thursday-Saturday, June 10-12,  that concluded with a team championship — its fourth since 2010 and 22nd overall — and three state medalists, including singles champion Max Bengtsson.

“Four out of our six players were seniors and they … put in the work and they really wanted it.”

New Trier’s other singles entry, freshman Nikita Filin, went 3-2 on the weekend, winning his first three matches before losing to top-seeded Max Sheldon, of Hersey, in the quarterfinals and Pranav Gadiraju, of Barrington, in the consolation bracket.

Bengtsson came in as the second-seeded individual and won his first five matches in straight sets before meeting No. 1 seed Sheldon, of Hersey, in the championship bout.

Sheldon jumped on Bengtsson, taking five games to open the match. It was a set Sheldon won 6-3, but Eckert said the fight Bengtsson showed to take back three games is what propelled him the rest of the way.

“Not that he won the first set, but I think that’s where he won the match, by putting his foot in the ground and letting Sheldon know it wasn’t going to be easy,” the coach said.

When he was down 5-0, Bengtsson said he regrouped. Recognizing he “really wasn’t playing my best tennis,” the senior dug deep and identified the adjustments he needed to make.

“The main thing I focused on is that I was just trying to find my way back to my game,” he said. “As long as I’m not playing awfully, there shouldn’t be a situation where I haven’t won a single game in the first set. … So I was really focused on trying to find my way back to how I normally strike the ball and I thought about stepping into the ball and being more aggressive.”

As Bengtsson started to reverse the trend and push Sheldon around, he accomplished two things: scoring points and tiring out his opponent on a 90-degree morning in Arlington Heights.

The result was a 3-6, 6-3, 6-2 comeback win for Bengtsson, who became the first individual New Trier tennis champion since Robert Stineman in 2011 (Stineman also won in 2010).

“It means a lot,” said Bengtsson, a Northwestern commit. “ … I got seventh my freshman year, my sophomore year I was probably favored to win … and ended up fifth so it was probably a let down. And not being able to play last year was tough for not only me but the whole team. So this year it means a lot I was able to win the state tournament. It’s such a big tournament and a fun tournament; there’s nothing really else that compares to it that I’ve experienced so far.”

New Trier had another championship entry, as top-seed duo Fox and Rogers advanced to the doubles title match against No. 2 Roegner and Saeed, of Naperville Central.

It was Fox and Rogers’ third three-set match in a row after wins in the previous two rounds: 6-3, 3-6, 6-4 in a quarterfinal against Barrington’s Ethan Paik and Ammar Wazir and 3-6, 6-3, 6-2 over Jai Vallurupalli and Majtaba Ali-Khan, of Hinsdale Central.

It was another New Trier doubles team’s win over Hinsdale Central that separated the teams, however. Matthew Plunkett and Jay Wagh topped Central’s John Fakouri and Dean Kamenev in straight sets (6-4, 6-1) to help New Trier to a team-points lead heading into Day 3.

After New Trier’s three quarterfinal wins (4 points each) and two semifinal wins (2 each) on Friday, it assured itself at least a tie for the team title. But there was no let up in the Trevians.

“Realistically, after Friday, there was some excitement but we all still felt like there was work left to be done,” Bengtsson said. “After these four years, if we would have tied for first with Hinsdale, which is where we were, I don’t think any of us would have seen that as a win.”

Eckert praised his lineup top to bottom for the weekend effort and was happy that in an uncertain year, the Trevians took care of its “unfinished business.”

“It was a really remarkable performance by all of our entries,” he said. “It was a true team effort with all entries contributing significant points. And it was great tennis too. Statewide this is just an exceptional senior class. It was high-level tennis. There were multiple college coaches watching and big crowds that stayed because the level was so great.

“We all appreciate the opportunity to play and have a full season that culminated in a state tournament, but the icing on the cake was waking away with a big trophy.”