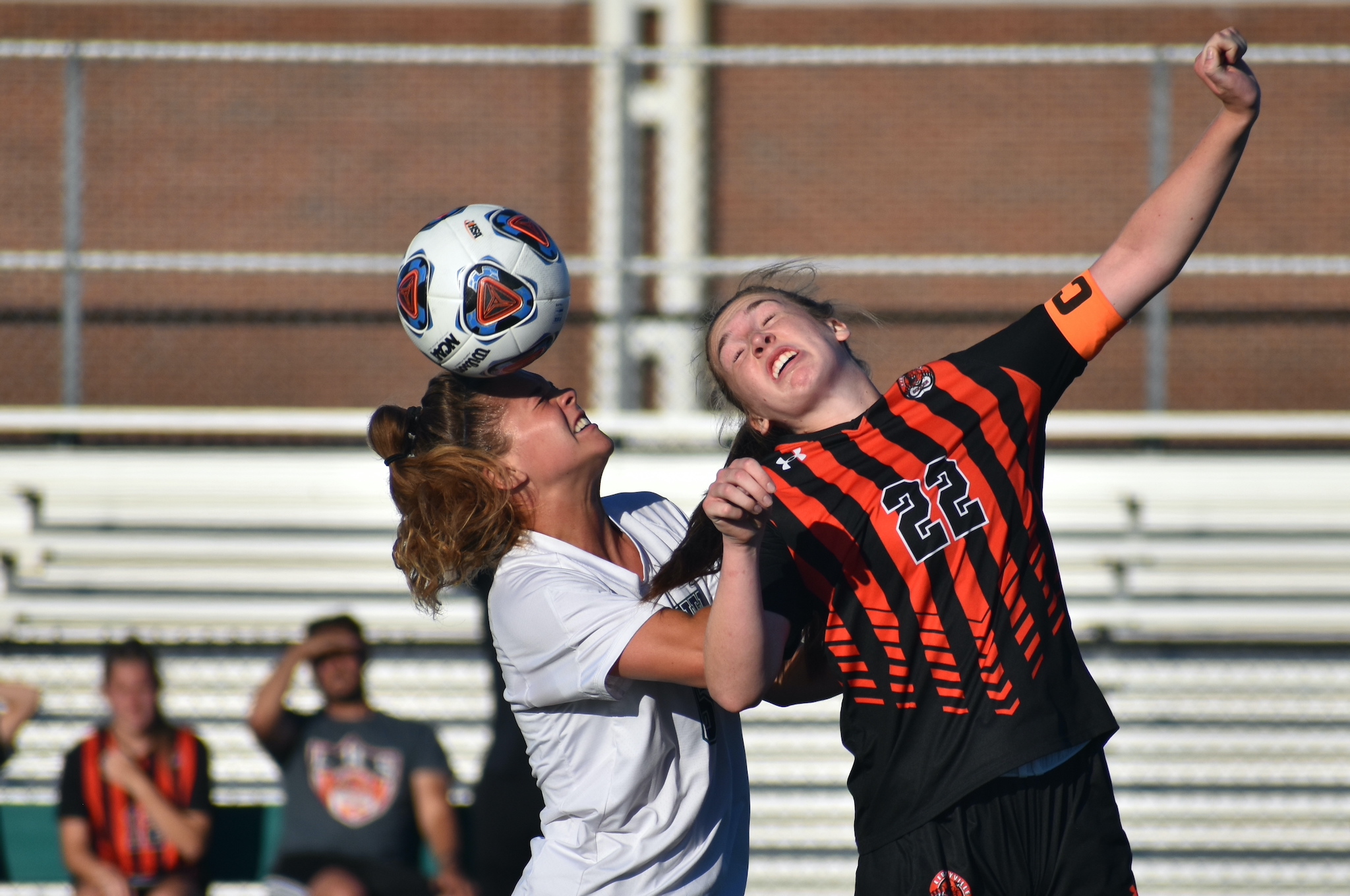 New Trier midfielder Caroline Finnigan gets a head to the ball during the supersectional match against Libertyville Tuesday, June 15, in Northbrook. | Photos by Joe Coughlin/The Record North Shore

Over the course of 500-plus wins and six state championships across 20-plus seasons, New Trier coach Jim Burnside has enjoyed many nights of good fortune on the pitch.

Tuesday was not one of those nights.

In a highly competitive supersectional bout, the big break went the other way, as Libertyville scored a breakaway goal in the second overtime to claim a 1-0 victory Tuesday, June 15, at Glenbrook North.

“You go in there and you try to hit the ball on frame and keep it away from the keeper and we did everything we needed to do and the ball didn’t fall for us today,” Burnside said. “I’ve been in enough games where it’s fallen for us. I feel really bad for the girls because they worked really hard out there to do everything they could and that’s how it ends.”

The Trevians had chance after chance near the goal, especially toward the end of regulation and in the first overtime.

But a collapsing Wildcats’ defense disrupted most of the attempts, while others went off-goal or right to the hands of goalie Hannah Vieth.

“We had chances,” Burnside said. “(The Wildcats) are fast. The chances come and go quick, but we had them.”

After one of those chances in the second overtime, Vieth punted the ball clear of her zone. It bounced off a New Trier defender and then a Libertyville touch from the midfield led the ‘Cats Avery Gleason behind the defense.

Gleason won the footrace, took a touch into the Trevs’ box and sent a shot far-post, past an outstretched Wynne Hague and into the net for the quick and surprising goal with 4 minutes to go.

Trevians senior defender Jenna Birdsell said there was some confusion on the back line.

“We thought a girl on our team hand-balled it, so we all sort of stopped and then they played it up,” she said. “It was a footrace and she got past me and touched it into the far right corner.”

The Wildcats then solidified its defense, and the Trevs could not develop a final offensive threat.

In regulation, New Trier had more chances than Libertyville, but Libertyville’s may have been more dangerous.

At the end of the first half, the Wildcats pressed and on a cross, they put the ball right against the goal line, but Hague denied Libertyville’s Lauren Rocco at point-blank range.

The Trevs spent a significant amount of time controlling the ball in enemy territory and drew four corner kicks in the first half. But not much found its way on net.

Late in the second half, New Trier’s attack intensified. A goal seemed imminent, but it never came. Kate Dobsch put a trio of shots on goal and was once blocked in front of the net by a lunging Wildcats defender. A shot by Alex Wirth skipped inches wide, and a try by Caroline Finnigan sailed over the crossbar.

Burnside said he couldn’t have asked for more from his offense, and Birdsell agreed.

“Honestly, I think that we gave it our all,” she said. “Every single person laid it all on that field and we had our chances and we just couldn’t finish them. Our forwards were grinding it out till the end.”

Libertyville moves on to face O’Fallon in one semifinal match Friday, June 18, while Barrington will battle Lyons in the other.

New Trier picked up conference, regional and sectional championships this season. Tuesday’s loss is its first before the state tournament in seven seasons. Its run of six straight state trophies, which include three championships from 2014-16, is over.

“We had a very special and close team this year and I’m super proud of how we played and how much heart and grit we had, but we just didn’t have enough to get it in the back of the net,” Birdsell said. “After having a year off last year because of COVID, we had to make up for it this year. So the seniors on this team took that to heart and we had a very close team.

“We were friends on and off the field and that really helped to get us this far.”