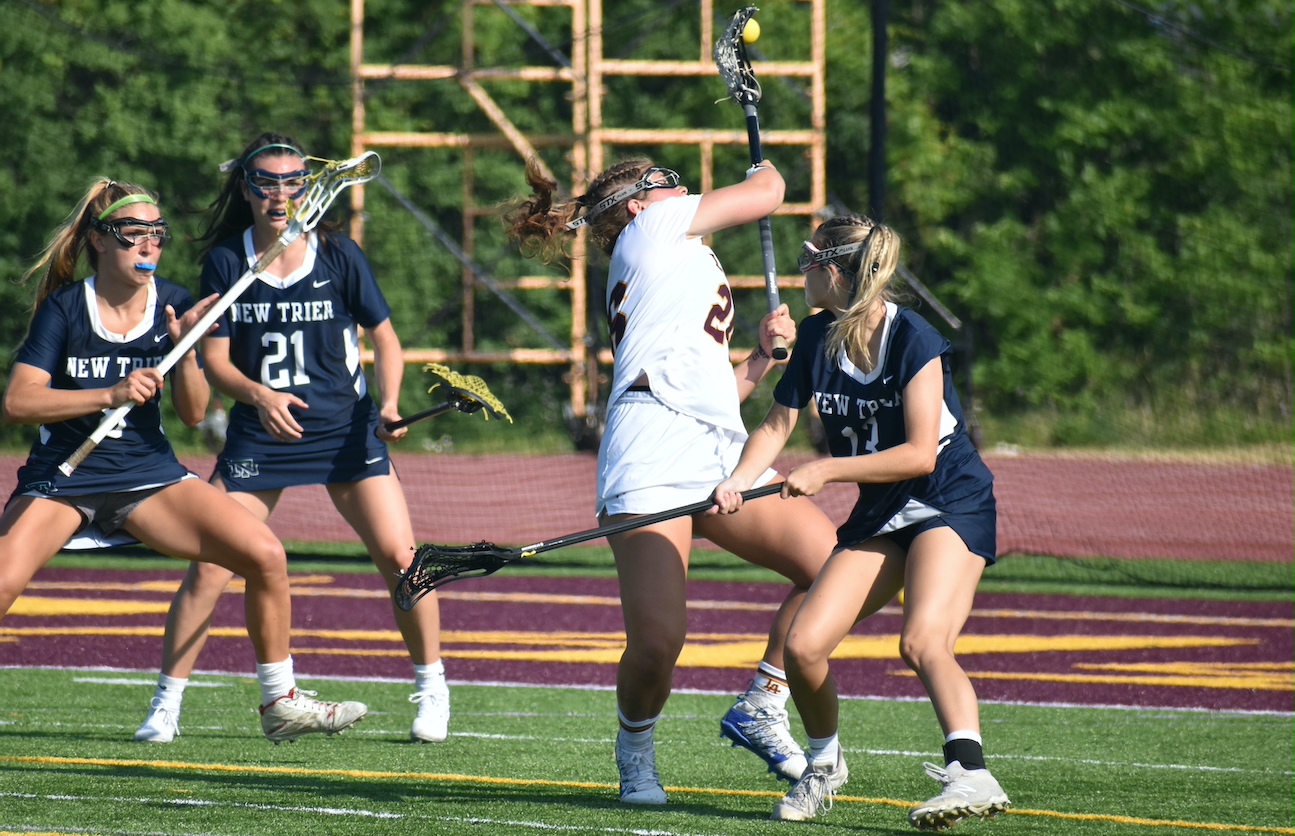 Ellie Lazzaretto has been here before. Or at least that’s what it felt like.

She and the Loyola Academy girls lacrosse team trailed New Trier 7-1 in its sectional final matchup on Friday, June 11, just like it did two years ago in the same postseason round.

But the senior wasn’t going to let her team follow the same path as 2019, when the Ramblers lost 13-11. She led her team’s charge back to force overtime and once there, she scored the game-winning goal in a 13-12 sectional classic between the state’s top two programs.

“We came together and got the job done,” Lazzaretto said. “It was the most special thing in the world.”

Down 12-10 with just under three minutes remaining, Loyola goaltender Caroline Smith made the play of the game when she jumped on a ball behind her net, assuring her team’s possession. The Ramblers moved the ball down the field and Sloan Trapp scored with 56 seconds to go.

Loyola used that motivation to take the ensuing faceoff and set up behind the net. With the ball, Lazzaretto then rushed to the net to score the game-tying goal with 46 left in regulation.

After battling possession for the ball to start the overtime period, the Ramblers moved the ball around taking their time before Lazzaretto was fouled in the penalty area.

The senior buried the free shot to ignite her team and the fans and push her team to the supersectional round.

“She has the biggest heart,” Loyola coach John Dwyer said of Lazzaretto, who will play next year at Duke University. “She is one of the most amazingly talented players we’ve had in this program and she showed it today. Big players play well in big games.”

New Trier ran out to a quick 3-0 lead within the first four minutes of the game before Loyola broke its scoreless start five minutes into the game. But the Trevians continued to dominate the draw, creating plays behind the net and expanding its lead to 7-1.

Lazaretto scored her first of eight goals with just under 12 minutes left in the game, but the two teams exchanged goals until Lazzaretto scored two goals in the final minute in the first half to make it a 9-7 New Trier lead at the half.

The Trevians scored two quick goals in the second half and chewed time off the clock, allowing eight minutes to wind between goals midway through the second half. Ella Huber scored her team’s final goal of the game with 10:16 left in regulation.

While it was a difficult way to end the season, New Trier coach Pete Collins was proud of the way his players not only battled in the game, but how they also battled for much of a season under strict COVID-19 protocols.

“The girls played their hearts out,” Collins said. “We talk about leaving the uniform in a better place and the legacy and these kids did that.”

Loyola is now 22-0 this season and will continue its run toward a state championship with a matchup against St. Ignatius in a super-sectional on Tuesday, June 15, at Loyola.

The Ramblers entered the postseason with the mindset that they are 0-0 and need to win six games. With three games done, Lazzaretto knows what’s at stake.

“We’ve got three more before the job’s done,” she said.