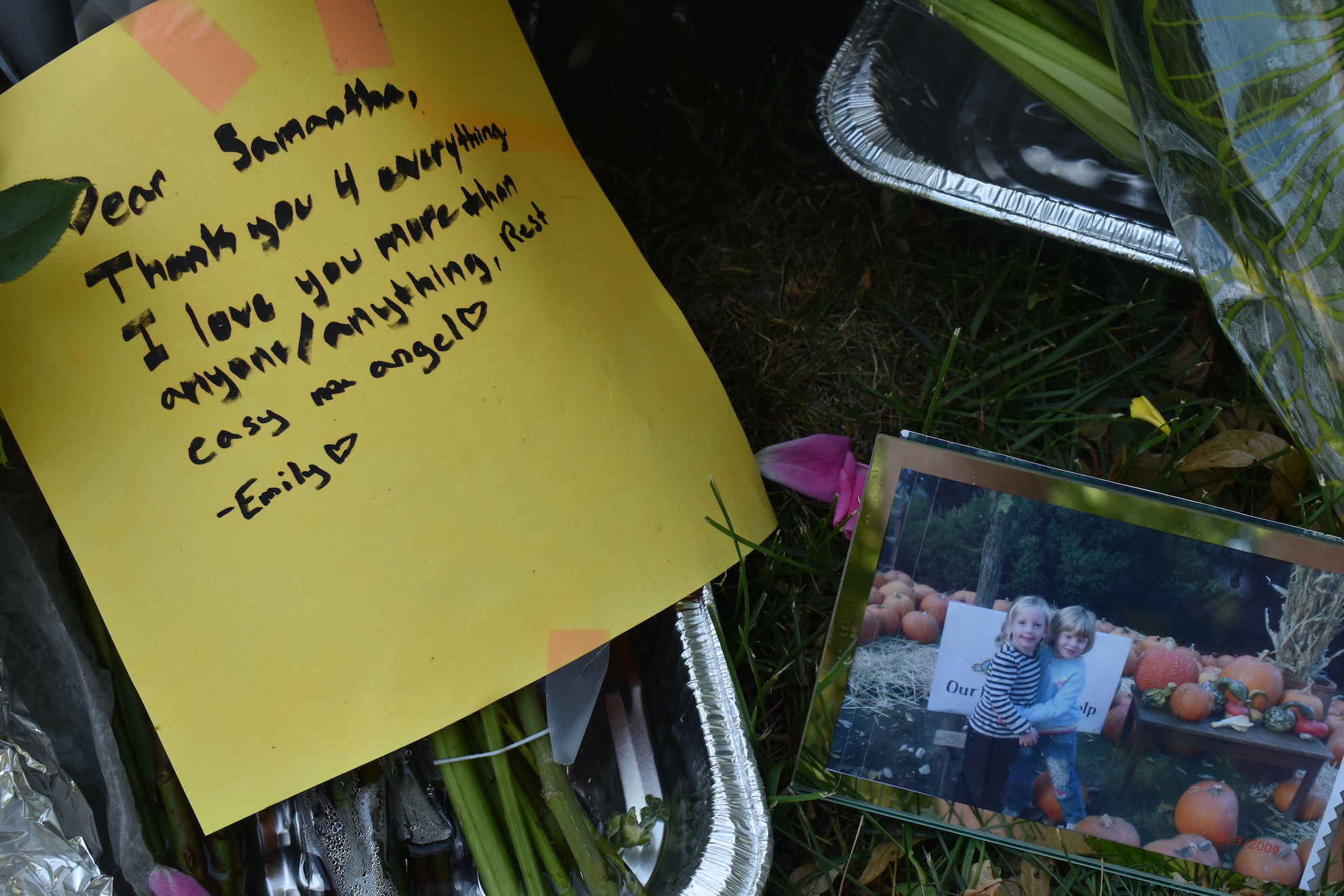 A photo and message laid at a lamppost near the home of Samantha Cerrone. | Joe Coughlin/The Record North Shore

“Such a beautiful person.” “The community won’t be the same without you.” “I love you so, so much.”

Messages lovingly penned on a posterboard at the corner of Linden Avenue and 3rd Street reveal the grief and love felt at the loss of Samantha Cerrone, a New Trier High School sophomore who died after an accident on Wednesday, June 9.

The posterboard is affixed to the corner’s lamppost near Samantha’s home. Below the tributes are a hill of flowers and mementos, including a photo of her as a small child and a snorkel. Another note on yellow construction paper rests among the flowers.

“Thank you 4 everything. I love you more than anyone/anything. Rest easy angel.” – Emily

The lamppost is also adjacent to CTA tracks that guide el trains south into the city.

Samantha was walking along the tracks, south of Isabella Street, with a friend early Wednesday morning. They reportedly tripped, and Samantha fell onto the charged third rail. She was electrocuted and pronounced dead at 3:30 a.m. at Evanston Hospital, according to Cmdr. Ryan Glew, of the Evanston Police Department.

Her friend attempted to pull Samantha from the deadly rail and was shocked. The friend’s injuries, Glew said, were “non-life-threatening.”

A memorial visitation for Samantha is set for 3 p.m. Saturday, June 12, at Donnellan Family Funeral Home, 10045 Skokie Blvd., in Skokie. At 5 p.m., “memory sharing” will begin, according to an obituary for Samantha.

Samantha was an active teenager. She worked at Valli Produce in Evanston, according to her father, Rudy Cerrone, and was a swimmer with both the New Trier Aquatics youth swim club and New Trier High School’s program.

“She was a very busy girl and dedicated to what she was doing and to the swim club,” he said.

Alexis Keto, the director of New Trier Aquatics, said the program was lucky to have Samantha on the team.

“She always volunteered to help whenever we needed it and cheered for her teammates at every opportunity,” Keto wrote to The Record. “She had worked up from the developmental track of our program up to one of our highest training groups. While she had a great love of swimming, her success was through hard work and quiet persistence.

“Her smile and gentle sparkle is missed in and out of the pool.”

The Cerrones have lived on Linden Avenue for 30 years, Rudy said, and 16 years ago welcomed Samantha, their only child.

According to the obituary, written by the family, “She lived to not be ordinary and encouraged others to have the confidence to do the same. She loved music and self-expression. A true goal setter. She was an advocate for others and had an impactful spirit across all age groups. Samantha valued her time and strived to live life to the fullest each day.”

The CTA crossing is steps from the Cerrones’ home. Rudy pointed to them and said he and his wife warned Samantha of the track’s dangers since she was little.

He knows “kids will be kids,” but along with his grief and his tears, he can’t help but feel anger. He hopes parents remember his daughter’s story and never stop preaching safety.

“Don’t get tired of it, as stupid as it is to us to keep saying the same thing,” Rudy said. “Be steadfast.”