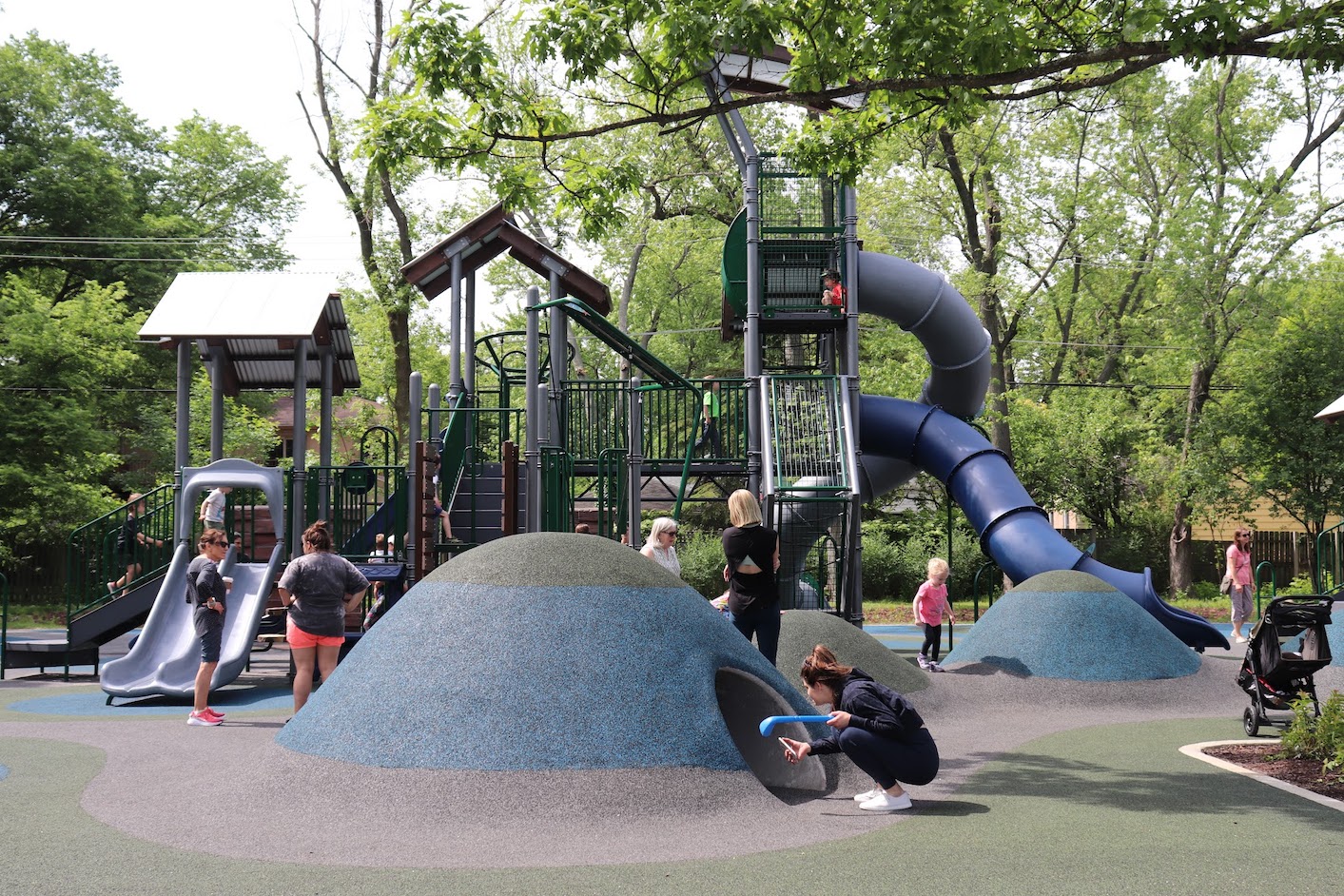 Clarkson Park in Northfield has reopened to the public after a $1.5 million upgrade. It will be celebrated with a grand reopening party on June 23. | Photos Submitted

The new and improved Clarkson Park is opening just in time for summer after a four-year process.

The Northfield gem has been completely reconstructed with a new playground, band shell, splash pad and walking path.

The park, located off Willow Road at Bristol Street, recently had a “soft opening” to locals, but will be largely celebrated at a party from 6-8:30 p.m. June 23, said George Alexoff, Northfield Park District executive director.

“We are pretty excited about it,” Alexoff said. “It’s so cool to see the kids out there. It’s really something different. It’s a nice area for parents to come out and have fun with their kids, enjoy a picnic and play.”

The project started about four years ago after residents communicated to the park district that they wanted to see the park more updated.

Clarkson Park was last updated in 2004, when the park district added a children’s playground and remodeled Clarkson Lodge with indoor and outdoor fireplaces, a concession stand, and meeting/party area inside, per the website.

This time around, however, the park district didn’t have the funds because it just completed a revamp of its Community Center, Alexoff said.

“We applied for a PARC grant (for the project) and we didn’t receive that. But then we had some concept plans already developed from that so we presented it to the Northfield Parks Foundation,” Alexoff said.

The foundation launched a community fundraising campaign and ended up gathering $425,000 for the new park. Plus, Northfield Park District landed a $400,000 Open Space Land Acquisition and Development Grant from the state, and then “picked up the balance from the capital fund,” Alexoff said.

“We rely a lot on our community to step up and do things when they can,” he added. “And the support from the foundation is tremendous.”

All of these efforts contributed $1.5 million toward the new park, Alexoff explained.

Park plans were approved by the Village of Northfield by February 2020, but then came another hurdle: the onset of COVID-19.

“The (park) board thought long and hard about if we should start this project at the time,” Alexoff told The Record. “But we decided to pull the trigger and do the project. We started construction [last] August.”

The previous playground and picnic shelter was demolished in September and construction began thereafter.

The base of the new playground is pour-in-place rubber, which is permeable allowing for rainwater to run through to a bioswale and new rain garden.

The playground itself is “more accessible,” Alexoff said, and is also “more challenging” reaching up to 26 feet tall after Village officials OK’d a height variance for the new park.

Also new and already open is the park’s splash pad. That area runs on a daily timer from 9 a.m.-8 p.m., and when children want to use it, all they have to do is touch a nearby pole for a 3-minute water cycle.

The new band shell complements the lodge and will add to the park district’s Northfield Market and Music series that launched two years ago. The event attracts about 300-400 people weekly with live music and food and drink, Alexoff said.

Northfield Market and Music returns July 7 and runs through Aug. 18 at Clarkson Park. For the schedule, click here.

“The overall usage of the park now is pretty cool,” Alexoff said, adding he enjoys walking through the area and seeing families utilizing the new park. “There are kids playing there in the early (morning) hours until the sun goes down.”