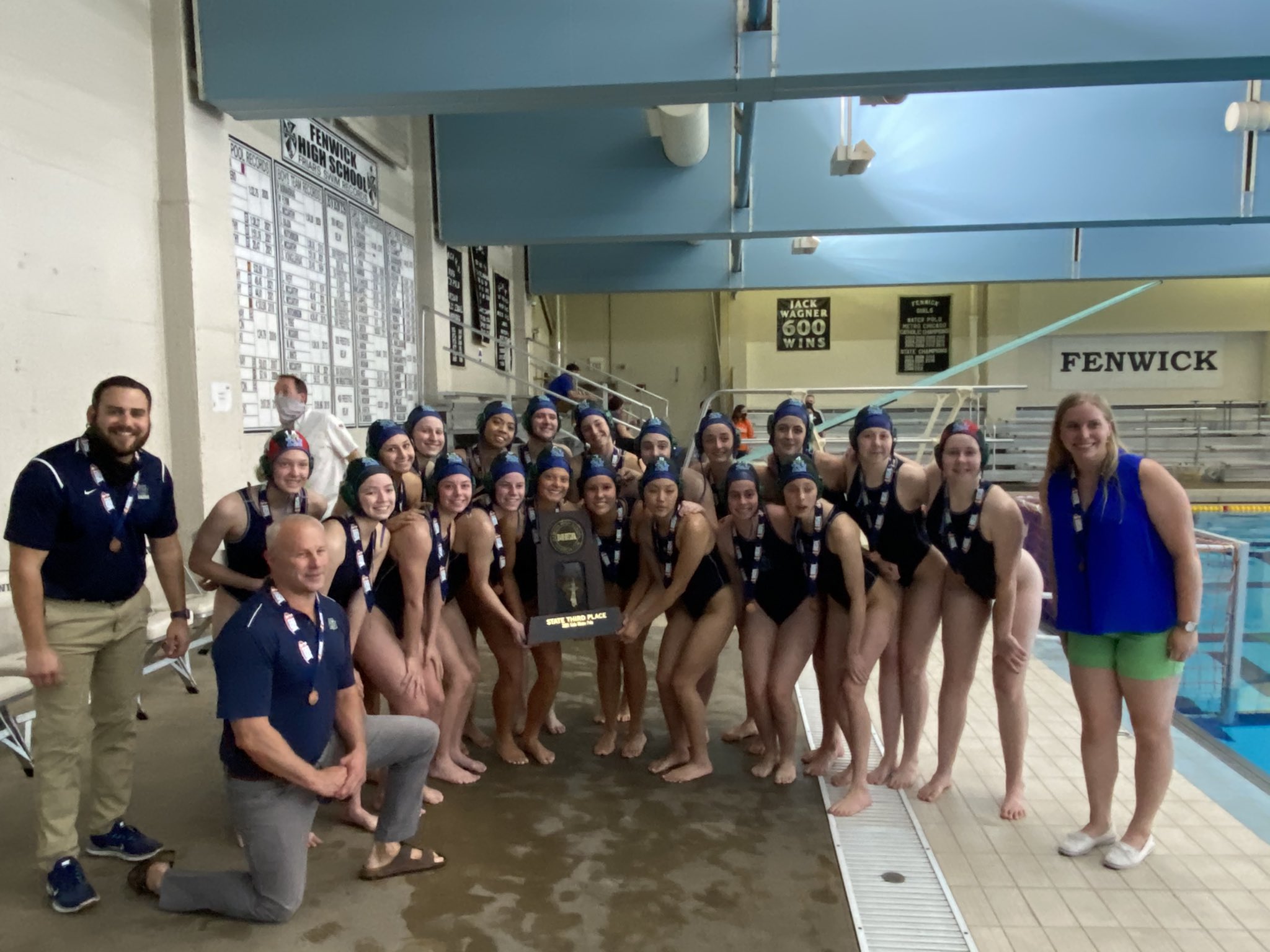 The Trevians girls water polo team gathers around its third-place trophy on Saturday, May 29, at Fenwick Hogh School. | Photo Submitted

Not so fast. The question is not as easy as it sounds. The former ends in victory, while the latter with defeat, sometimes in heartbreaking fashion.

Only two teams per sport get to end their season with a win in Illinois, and New Trier girls were one of them thanks to a 10-4 victory against Hersey in the IHSA third-place bout Saturday, May 29, at Fenwick High School in Oak Park.

“Is it better to get third and finish on a win or get second and finish on a loss? The team was split on that to be honest,” Trevs coach Matt Wendt said. “We’ve never gotten third. Two fourth-place finishes and a second-place finish. I’ve never ended the season with a win and it feels good. Some girls thought so too, others would have rather been in the final game.”

In the season finale, New Trier limited Hersey to just 12 shots on goal and 23 shots total. The Trevs shot 44 times with 21 on goal.

Wendt said the key was shutting down Huskies star Annie Lindgren, who scored all four goals for her team and had more than 70 on the season.

“We had a good game plan and we executed it,” he said. “Annie Lindren is a great player for them and their goalie (Alexa Knutson) is outstanding. We really tried to limit how many goals Annie could score but also get the ball in close so we could beat that good goalie.”

Getting the ball near-goal meant putting it in the hands of senior Bridget McKenna, who again delivered, scoring four goals to lead the Trevs. Her efforts were backed by Emily McKenzie (3 goals, 2 assists) and Carmen Connor-Crewe (2 goals, 2 assists).

“Bridget McKenna all season long has been our hero,” Wendt said. “She scored game-winners in the conference final and sectional final. Incredible production from her at the center position. right in front of the goal. … That goalie is so good and so tall (that) it would have been hard for us to get it past her shooting from the outside. We had to get it inside.”

New Trier, which ended the season 26-5, advanced to the eight-team state finals thanks to a 9-8 overtime win over Evanston in the sectional championship. McKenna had the overtime winner as the Trevs beat the ’Kits for the fifth time this season.

At state, the Trevs opened with a 10-8 win over York (15-5) on Wednesday, May 26. Carmen Connor-Crewe scored four times, while McKenzie and McKenna found the box three times apiece.

In the semifinal, New Trier was matched up with eventual state champ Naperville North (also the Huskies). North jumped out a 5-2 lead that it stretched to 8-2 by halftime. The Trevs could not recover despite a four-goal third period.

Wendt said his team was outmatched on the experience side.

“Naperville North has played more water polo than us. We have a relatively young team,” he said. “They are a classy team and they got their star, Anna Tarantino and she’s a great player.”

The Huskies capped their unbeaten season with a resounding 15-6 win over Stevenson in the state championship.

Wendt’s team also finished on a win to earn the program’s fourth state trophy in the last nine seasons with 2021 being the most unusual.

“I’m very thankful that we even had a season,” he said. “The girls were safe and healthy (from COVID-19). We had no quarantines. We won our big games in dramatic fashion … where the girls really stepped up.

“It was a great season. We’re sorry to lose our seniors but we’ll rebuild next year and we’re going to have a great year next year.”

In IHSA play, especially after the sectional rounds, teams are at the mercy of an indiscriminate draw.

Seedings no longer factor, and the matchups are preset prior to the tournament. Sometimes it works in your favor, and other times, you must play a team that has not lost in two months.

The latter was the case for the New Trier boys water polo team, which matched up with Neuqua Valley, the winners of 15 straight, in the opening round of the eight-team state finals on Thursday, May 27, at Fenwick High School.

The Wildcats and Trevians battled through to a 7-7 tie through three quarters, but Neuqua imposed its will in the final period, taking a 12-8 win to advance to the semifinals.

“They were big, they were athletic and they play this style of water polo that is fast and forces you to make decisions,” Trevs coach Daniel Rafferty-Flatter said. “We knew we would have our hands full. We have four seniors who played significant minutes but for the most part we are leaning on juniors and sophomores and knew it would be a tough task to accomplish.”

After a loss to eventual state champ Stevenson, the Wildcats moved on to the third-place contest Saturday, May 29, when they bested Lincoln-Way East 14-13.

Stevenson won the title game 15-8 over Lyons to complete its perfect season (30-0).

New Trier’s loss ended its season at 23-7 and conference and sectional champions. The Trevs started three seniors to go with two juniors and two sophomores.

Wendt, a sophomore, was the team’s leader in goals with more than 80 on the year, but New Trier succeeded with a united effort on both sides of the pool, said Raffery-Flatter. Five other Trevians (Walsh, Schermerhorn, Jack Kohr, Red Ricciardi and Thomas Dean) scored at least 30 goals.

Rafferty-Flatter said the offense ran through Ricciardi, a junior, who added more than 40 assists to lead the team. And defensively, coach gave a lot of credit to junior goalie Eli Sternweiler, who “single-handedly kept us in games.”
“I would put a third of the wins on his shoulders,” Rafferty-Flatter said.

In a school year mired by disruption related to the COVID-19 pandemic, the Trevians played just a couple games fewer than a normal season, he said, making sure again to credit his players for the special season.

“The word that comes to mind is blessed,” Raffery-Flatter said. “The guys deserve all of that credit. We were always waiting for that phone call from our administration, “Hey this has happened; we gotta shut you down.’ … Our guys did a heck of a job of committing to each other. They created a natural bubble. They didn’t hang out with anybody else and we did it. I think that’s a successful season.”