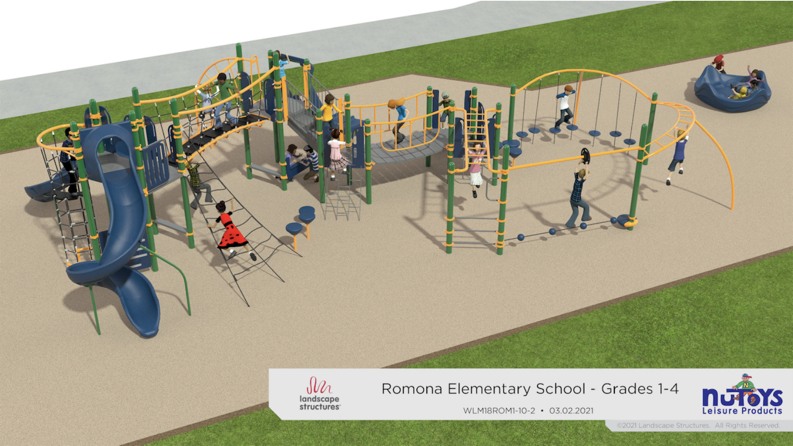 A new playground at Wilmette's Romona Elementary School is set to be complete this summer. | Graphic courtesy of District 39.

The Romona Elementary School parent-teacher association set its sights on a new school playground three years ago. That vision is now a reality, as the school will get new equipment this summer thanks to years of fundraising and devoted efforts — and a contribution from Wilmette District 39.

The Wilmette D39 Board of Education approved a donation agreement between the PTA and the board during its Monday, May 24 meeting, making the project official.

Romona PTA worked with district officials to review ways of improving the 25-year old playground that it said does not “accommodate” the school’s “population and needs.”

“New playground equipment will provide a safe space for all our children to play, and for us to have an appropriate space for all learning and need levels, something we sadly do not have at this time,” PTA President Kimberly Newman said in a 2019 letter.

But with an estimated price tag of $100,000 for a renovation, finding funding was no small task.

The PTA set a fundraising goal, and the Wilmette Public Schools board agreed to contribute $30,000 if the goal was met.

With more than $80,000 raised for the project, the donation agreement became final May 24.

The playground renovation project is scheduled to be complete by Aug. 13 of this year, according to the agreement.

“We are so fortunate here in our district to have the support of so many parents and PTA and PTO,” Superintendent Dr. Kari Cremascoli said at the meeting.

She added that the district is “incredibly thrilled and grateful for all of their hard work.”

Cindy Anderson, the principal of Romona, said the fundraising work the PTA did is “truly outstanding,” adding that it devoted years to fundraising through a variety of means.

Anderson called the addition of a new playground a “difference-maker for all our mustangs.”

PTA member Lauren Litchfield thanked the community and the board for its support, adding that the goal could not have been accomplished without that.