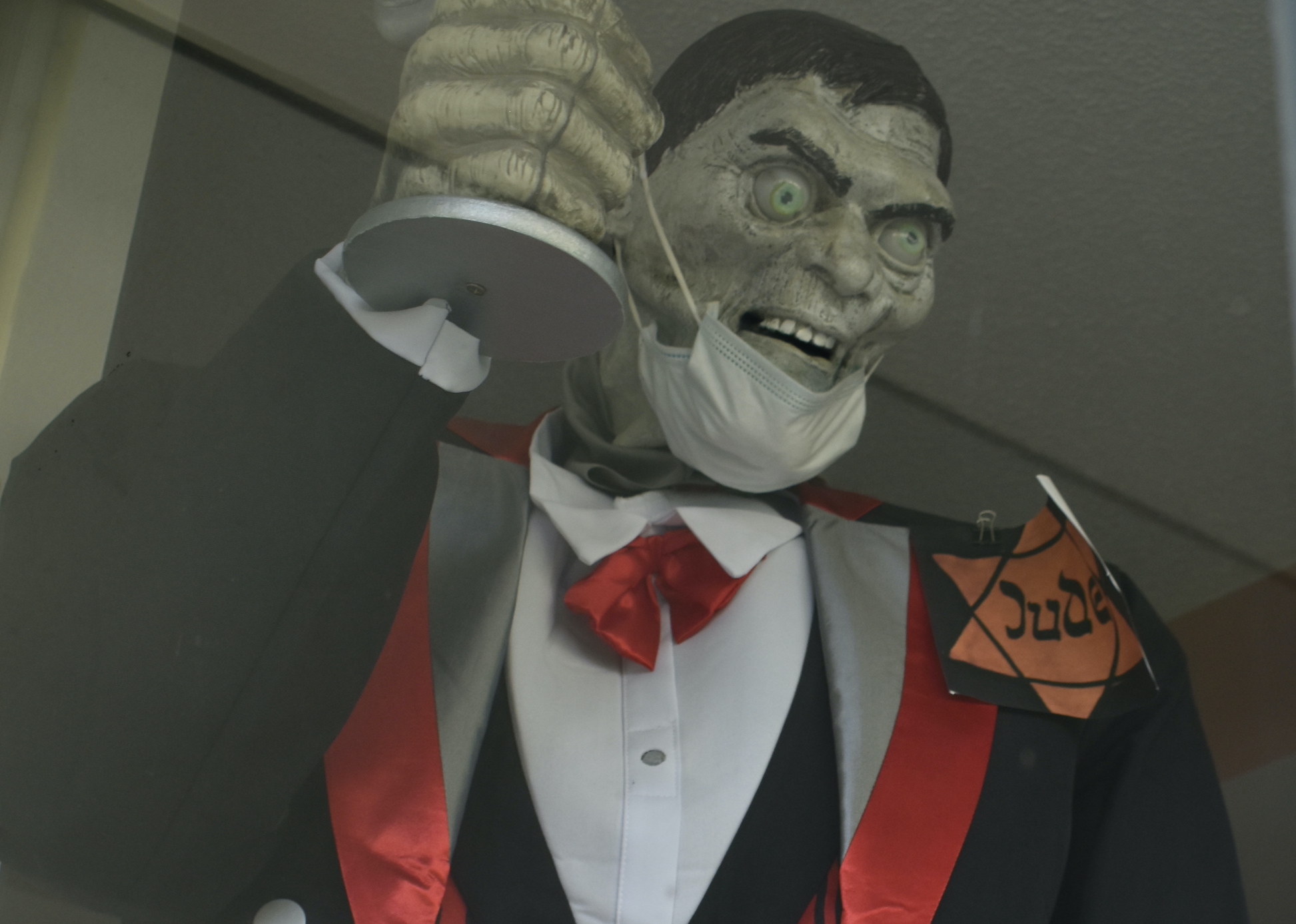 A controversial residential window display has sparked outrage in Wilmette that reached all the way to Village Hall.

Village President Senta Plunkett read a statement during the regular Village Board meeting Tuesday, May 25, that denounced the display, calling it “anti-Semitic” and “highly offensive.”

But Marshall — the owner of the condominium unit that features the display and who requested his full name be withheld out of fear of harassment — told The Record that it is a statement in protest of how he is treated by his neighbors as a Jewish man.

Wilmette Village Manager Mike Braiman said village officials were aware that Marshall was behind the display, but could not speak directly with him as there is pending litigation between the two parties.

“We have a long litigation history with the tenant,” said Braiman, who is also Jewish. “ … We are not in a position to communicate directly with him … but whatever the individual’s reasoning may be, the display is incredibly insensitive and offensive to many of our residents who may not know what his reasoning is and may not care what it is.”

The display is featured in Marshall’s first-floor west window, which faces the building’s entryway and can be seen from the sidewalk in the 1600 block of Sheridan Road.

It includes a large, monster-like figure dressed like a butler that is wearing a yellow Star of David on the left side of its chest.

Marshall said the Star of David represents his Jewish faith and is a protest against anti-Semitism, and the monster figure is a representation of one of his neighbors.

During the Holocaust, Nazis required Jews to wear identifying items, such as a yellow Star of David,  as they invaded land across Europe. Marshall, however, likened his display of the icon to the King of Denmark’s promise to wear a Star of David in protest to the Nazis, if the Germans issued a mandate in his country, which they never did.

“I am protesting what is going on (in the building),” said Marshall, a 27-year resident of the unit. “They want me out of here and to ruin me economically.”

He added that he erected the display three years ago. It garnered attention Monday, May 24, when a resident posted about it on the social media platform NextDoor.

In the since-deleted post titled, “Anti-Semitic exhibit in Wilmette,” the resident described the display as “horrific” and said they contacted building management and the Village of Wilmette.

Neither the building’s condo association or the property owner returned messages from The Record.

The social post had dozens of reactions and comments, including one from Marshall attempting to explain the display.

Marshall showed The Record a number of items he said previously accompanied the display; however, he said, he was legally ordered to remove the items, which identified many of his fellow tenants.

Later on Tuesday, Plunkett opened the Village Board meeting with a statement about Marshall’s exhibit.

In part, it reads, “Although highly offensive, the display cannot be regulated or removed by the Village because we do not like the message; this individual is entitled to their First Amendment rights under the United States Constitution. We cannot disagree strongly enough with this individual’s actions.”

You can read the full statement here.

Braiman added, “There are probably much more appropriate ways to make a statement that do not paint with such a broad brush that really triggers deep emotional reactions.  … That person has the right … but we don’t have to like it and don’t have to agree with it.”

Marshall said he is not taking the display down because he feels he is not doing anything wrong. If he were, he said, he would take it down.

“I am not the anti-Semite,” he said, again alluding to his neighbors.

Marshall, his neighbors and the condo association have been embattled in litigation over the past decade. More than one lawsuit remains active.

In 2019, Marshall and his attorney were ordered by Cook County Judge Margaret Ann Brennan to pay more than $1 million in attorney fees for what Brennan wrote were “frivolous” complaints, according to a Chicago Tribune story.