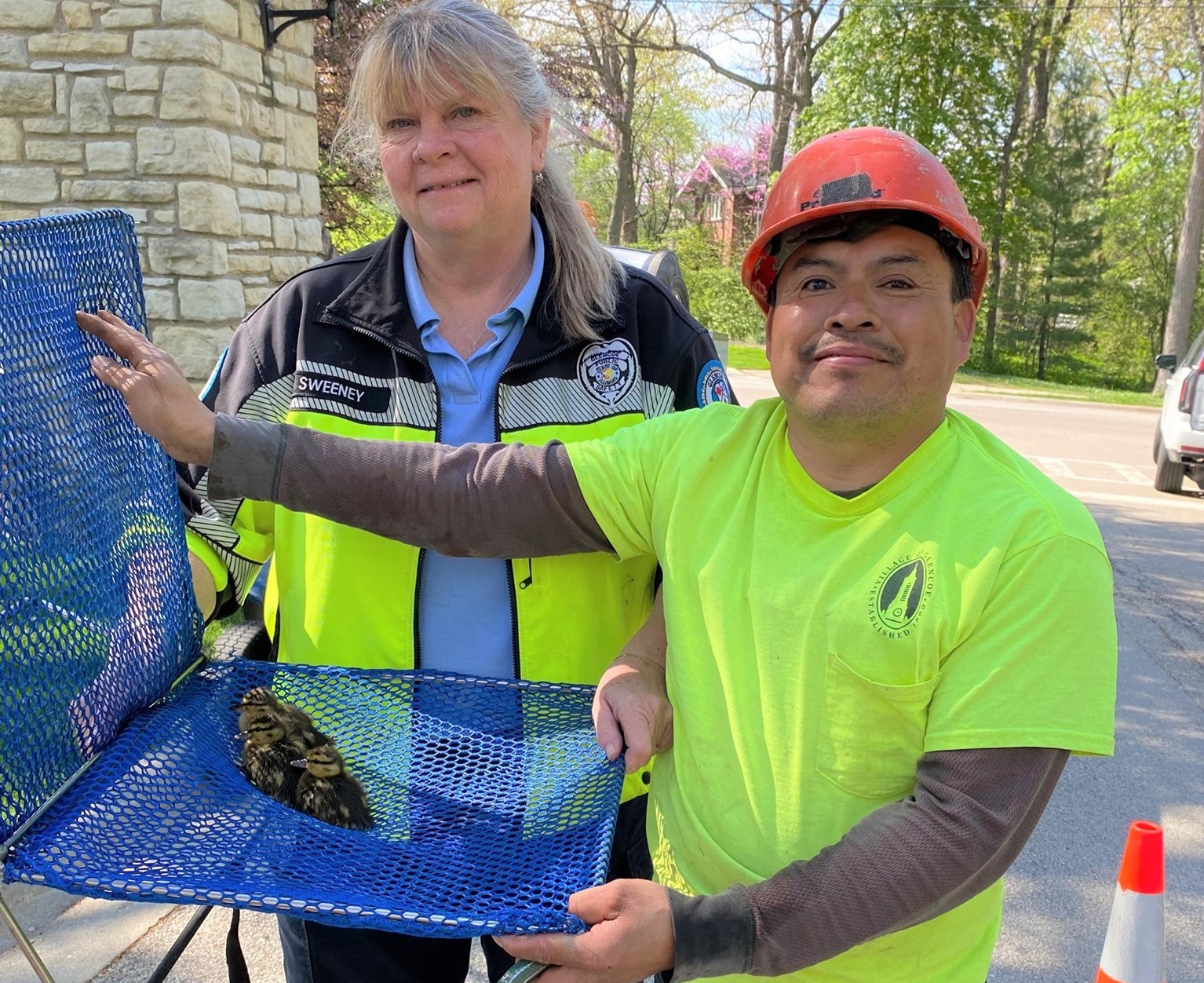 Village of Glencoe employees Katie Sweeney and Juan Carrillo gladly pose with the ducklings they saved from a sewer on May 7. | Photos submitted

And she was put to the test once again May 7 during a family crisis for a duck and her ducklings.

As the mother duck led her brood to water for the first time, four of them slipped through the openings in a sewer grate near Bluff and Dundee roads.

After a resident called in the trouble, Sweeney moved in to try to help.

“It’s difficult to get ducklings out of a sewer. I concentrated on Mom and the rest of them and managed to maneuver her in the direction of the (Skokie) Lagoons.”

Sweeney guided the duck family along Dundee Road and even stopped traffic when mama duck wanted to cross the road.

Once mama duck and her four other ducklings found water near the Chicago Botanic Gardens, Sweeney headed back toward the sewer, only to find her colleague, Juan Carrillo, a public works employee, ready to take action.

More Glencoe residents had called, and village officials asked a local crew already at work in the area to see what they could do.

Carrillo removed the grate and went down to find and save three of the ducklings that fell. Unfortunately, Sweeney said, the fall was too much for the fourth duckling.

Sweeney then took the three back to the banks near where the rest of their family entered the water, hoping for a speedy reunion.

“I went down the embankment and set them by water and they were loud enough where mom heard them and she came back,” Sweeney said.

“It was … really nice. Everything kind of worked out. The mom cooperated, Juan came at the right time. The mom was really concerned about the ones in the sewer, bue she cooperated with me and did her thing.”

Glencoe Trustee Joe Halwax said the duck was a guest in his yard, where she build her nest and laid her eggs.

Sweeney said it is usual for mother ducks to nest wherever they may feel safe, such as residential areas.

Halwax told his fellow board members on May 20 that he saw the duck and ducklings set out on their adventure that day. He also was one of the residents who called the Village for help.

While recalling the experience, Halwax said he saw deeper meaning in the cooperation and unity he saw from his community.

“This story may seem light and may seem cute and like seemingly unimportant events to some at least, but I saw at least 20 people come to stop who were concerned,” he said. “It made me realize things like this break us out of our tribes. It is a chance for us to come together.

“This little story, this fantastic thing gave me a really warm feeling that has been absent for the last 15 months.”