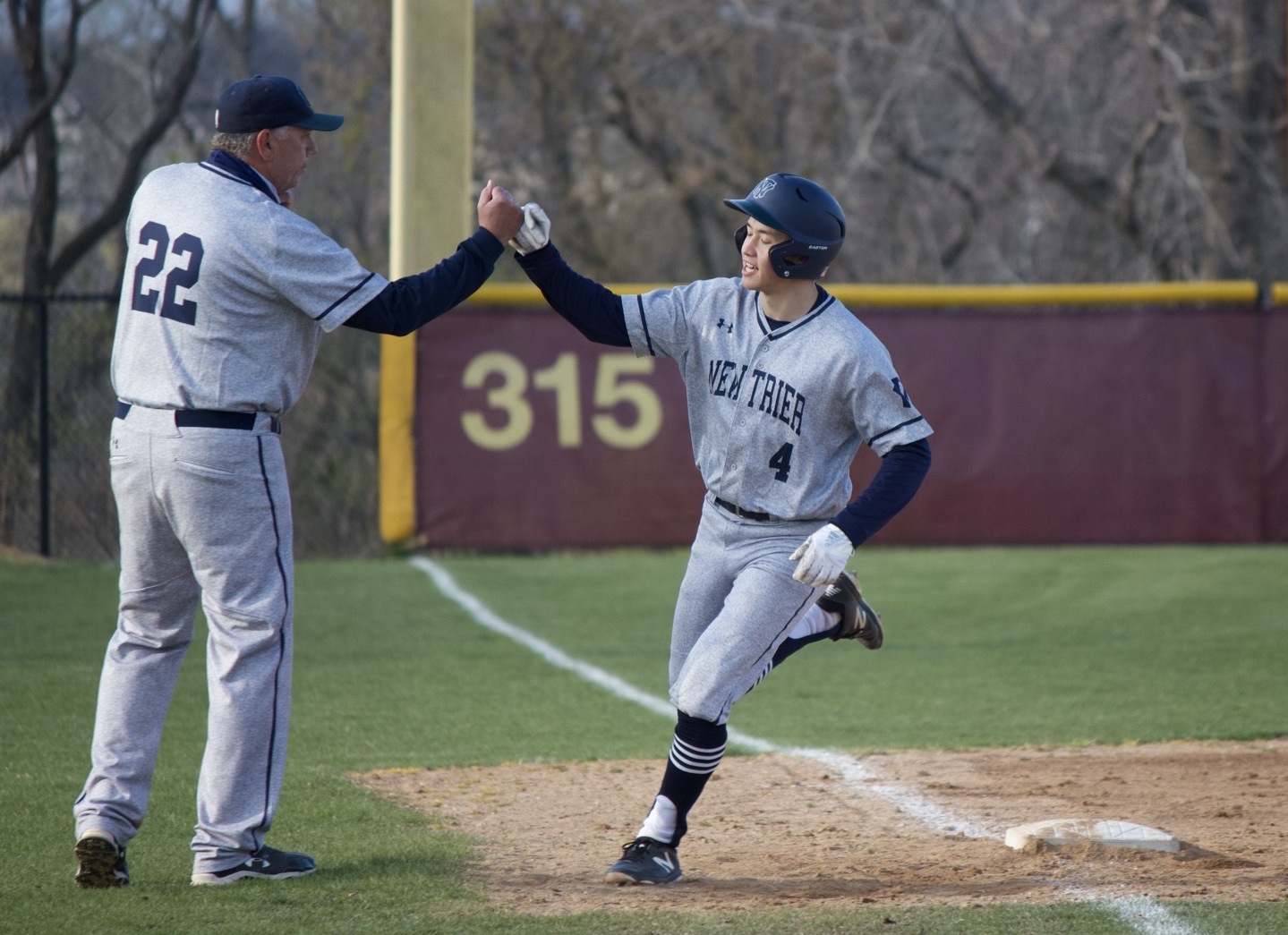 Alex Calarco clubbed two home runs to lead the Trevs to a 7-5 victory in Game 1 on Wednesday, May 19.

Eddy Mahoney scored on passed ball in the bottom of the eighth inning on Tuesday, May 18, in Glenview to give the Ramblers (12-10) their second walk-off win

Noah Klein struck out seven in seven innings of work, while Roger Simon homered for Loyola

Brendan Cohn scored on a balk to give the Ramblers a walk-off, conference victory on Monday, May 17, in Glenview.

Andy Pekar got the win from the mound to lead the Trevians to the victory Saturday, May 15.

Roger Simon hit for the cycle and knocked in six runs to lead the Ramblers to the conference win Saturday, May 15.

Noah Klein went 3-for-3, which included his third home run of the season, in the Ramblers’ league loss Thursday, May 13.

Morgan Van Horn knocked in two runs and KK Raymond had two hits and two walks for the victorious Ramblers on Tuesday, May 18.

Mackenzie Barry had a home run and five RBI and Morgan Van Horn had two hits and two RBI for the Ramblers on Monday, May 17.

Mackenzie Barry and Lily Moran had two hits and three RBI each in the Ramblers’ loss Saturday, May 15, when the Mighty Macs won in walk-off fashion in the bottom of the ninth inning.

Barry struck out 16 batters for Loyola.

Caroline Finnigan scored for the Trevs, but the ‘Kits notched the equalizer late in the second half in the draw on Wednesday, May 19, in Northfield.

The Ramblers scored in bunches to pick up their 10th win, a conference victory on Tuesday, May 18.

Morgan Fagan recorded a goal and an assist and Charlotte Dellin a goal as the Trevs picked up the CSL North victory Monday, May 17.

Charlotte Dellin headed in a goal off a Morgan Fagan corner kick to give the Trevs the conference win Thursday, May 13.

Grace Ehlert scored and Ellie Bradley picked up the shutout in net for the Ramblers (9-1-2) on Thursday, May 13.

Dawson Kimbell finished with 5 kills and 2 blocks for the Ramblers, but the Spartans remained unbeaten with the win Wednesday, May 19.

The host Trevians bested their conference foes on Tuesday, May 18, in Winnetka.

Ryan Merk collected 11 kills and Roan Regnier dished out 18 assists to lead the Ramblers (22-4) on Tuesday, May 18.

Michael Tilmont racked up 11 kills, while Casey McMenamin and Ryan Merk had 11 digs each in the Ramblers’ Catholic League Blue win Monday, May 17.

Sabastian Park had 6 kills and 9 assists for the Ramblers in the losing effort Friday, May 14.

The Ramblers best their visiting local foe on Saturday, May 15, in Glenview.

The visiting Trevians bested their local rival to move to 9-0 on Friday, May 14, in Evanston.

The host Ramblers took down one of the area’s best in the Scouts on Friday, May 14, in Glenview.

The Ramblers took care of business on Monday, May 17.

The Trevians clinched the CSL crown with a win Saturday, May 15, in Evanston.

The Ramblers won a home matchup on Saturday, May 15, in Glenview.

The Trevians picked up the league win Saturday, May 15, to clinch the CSL South title.

The Ramblers racked up 22 goals to win the third-place match of the MCAC tournament on Saturday, May 15.

The Ramblers fell in the semifinals of their league tournament on Saturday, May 15.

The Rambers earned the win in the MCAC tournament on Friday, May 14.

The top-seeded Trevians downed No. 8 Wheeling in the quarterfinals of the Glenbrook South Sectional on Tuesday, May 18.

The Ramblers advanced to the sectional semifinals with the opening-round win Wednesday, May 19.

The Ramblers outlasted the Mighty Macs on Saturday, May 15, to finish in third place in the MCAC tourney.

The Trevians topped the ‘Kits for the fourth time this season in a triple-overtime battle for the conference title Friday, May 14.

Morgan Mackie, a freshman, won the 3,200-meter run with a meet and track record of 10 minutes 51.69 seconds to pace host Loyola Academy to first-place team finish in the Red division of the Girls Catholic Athletic Conference meet Tuesday, May 18, in Wilmette. The old records were 11:25.10 (meet) and 10:57.24 (track).

Haneefa Adam, Sara Byrne, Tamia Quach and Kendall Williams won the 4-by-100 relay for Regina Dominican, who finished third in the White division of the GCAC meet. Byrne and Williams also joined with Erin Martens and Anna Greifelt to win the 4-by-400 relay.