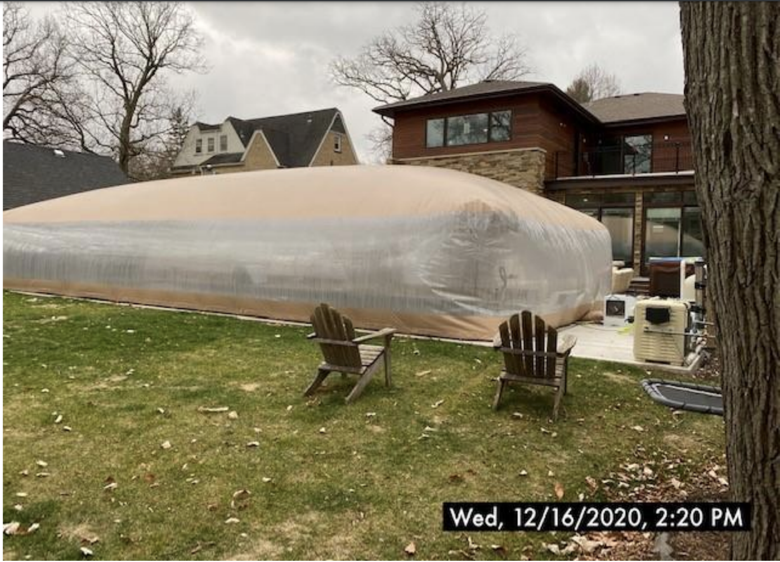 Winnetka residents Mike and Lee Ann Rechtin installed a dome over the pool in their backyard. But village officials say it violates zoning code. | Photo courtesy of the Village of Winnetka.

How do you keep an outdoor pool usable during a Chicago fall and winter?

One Winnetka family figured it out: You build a dome around it.

Winnetka residents Mike and Lee Ann Rechtin thought they had the perfect plan to get their pool in use nearly year-round, but a neighbor and local government didn’t think it was so perfect.

In late 2020, the family installed a temporary, inflatable dome over its in-ground swimming pool in the backyard of their home in the 100 block of Winnetka’s Fuller Lane.

Shortly thereafter, Winnetka officials received an anonymous complaint related to the dome from a neighbor of the Rechtins. Subsequently, in mid-November, the village issued the Rechtins a code violation, which is a warning letter and differs from a citation, the village said.

The Rechtins reached out to village staff before the end of 2020 to request that Winnetka’s Village Council consider adopting text amendments that allow a temporary pool dome without having to meet all of the zoning requirements.

Winnetka council members reviewed the applicant’s case during their Tuesday, May 18 meeting with the hope of providing staff direction regarding the dome so it could possibly be used this fall. Lee Ann Rechtin told the council that she planned to take down the dome this week.

David Schoon, Winnetka’s community development director, said that officials met with the Rechtins after they learned of their plans and told the couple that although the structure could be considered temporary and seasonal, it would be required to meet all applicable zoning requirements.

Village officials then reportedly sent a letter to the Rechtins detailing the zoning requirements for the structure.

The dome was installed in 2020, and per village documents, it failed to meet three parts of Winnetka’s zoning code: maximum roofed lot coverage, maximum gross floor area and minimum side yard setback.

After the complaint was filed with the village, the Rechtins, requested the council amendment.

Winnetka Village President Chris Rintz said it was his decision to refer the matter until a May meeting, stating his belief it was “in the best interest of fairness to not talk about it until it was time to come down.”

While addressing the council May 18, Lee Ann Rechtin said she has “done everything that this village has asked of (her).”

She told trustees that she would like to know within six months whether she can put up the dome again and, if so, when she must take it down.

But that likely won’t be known in the immediate future, as the council referred the case to Winnetka’s Zoning Board of Appeals for further study. The zoning board will then make a recommendation on the case and send it back to Village Council for a ruling.

The item is a matter or zoning, not of the structure itself. If the dome had met all of Winnetka’s zoning requirements, the village would have deemed it compliant, according to village documents.

Council members agreed that allowing the zoning board to hear the case will provide the council a more comprehensive understanding of the dome, including its safety.

“Right now no one is set up for success where we are,” council member Andrew Cripe said, noting there are “a lot of issues that we have barely touched the surface” on.

“ …  We are not wired for a successful process here tonight.”

The case introduces a policy question surrounding what constitutes temporary versus seasonal use and how officials should determine comparable uses that do not require a permit.

Uses deemed temporary in Winnetka traditionally last for a period of 30 days, officials said, while seasonal uses could extend up to six months.

Lee Ann Rechtin believes her situation should be used as a “test case.”

“This is an opportunity to use our situation as a test case to review and evaluate existing code language and permits; and to begin a dialogue that identifies and addresses a permit process for current backyard products and lifestyle trends that keep Winnetka at pace with attracting future residents, so that going forward, a pool dome can be a simple permit process,” she says in a letter to the village.

She also argued that other potential temporary uses, such as residential ice rinks, should meet the same zoning requirements as a temporary seasonal pool doom in single-family residential districts. A homeowner in Winnetka can install an outdoor rink without a permit.

A date for when the zoning board may hear the case was not available as of publication time.