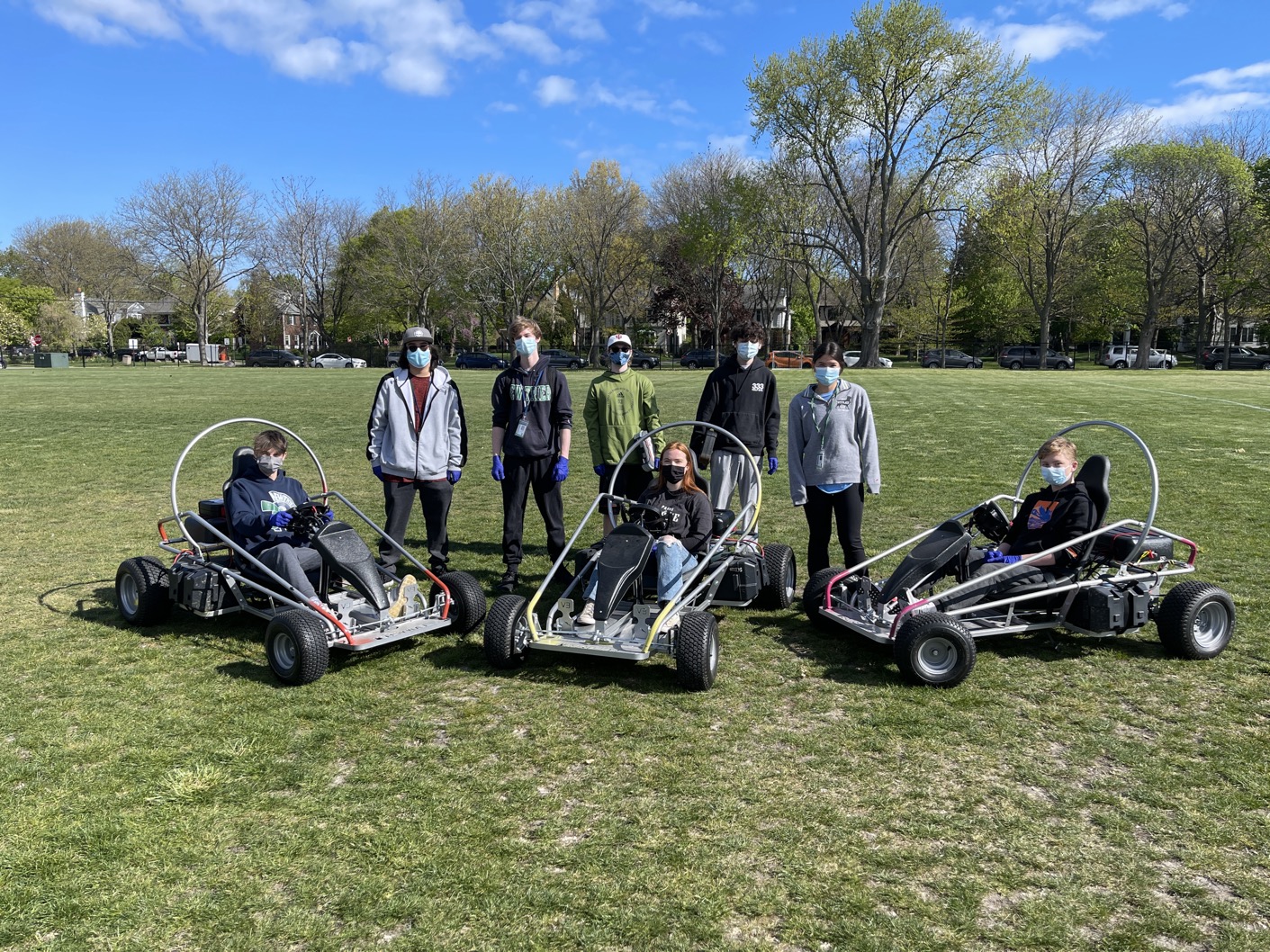 New Trier High School students enrolled in the automotive course pose for a photo with the electric go-karts they helped construct. | Photo Submitted

The old auto shop class at New Trier High School has shifted gears, leaving gas-only vehicles in the rearview and getting brought up to speed on electric go-karts.

The fairly new unit complements the school’s goal of restoring the automotive course to prepare it for the future, said Jason Boumstein, chairman of the school’s applied arts department.

“There are many students that are interested [in autos class], but in order to sustain and grow it for the future, we need to change the course for what’s in demand nowadays — and that’s electric cars,” Boumstein told The Record. “They are all over the place. Some dealerships are moving toward [electric] only. We didn’t want to be behind on the trend; we wanted to be in front of it.”

Students — sophomores through seniors who are eligible and enrolled in the course — are engaged in the electric go-kart project from start to finish, teacher Nate Silvers said.

This is the second year the autos course has offered the project to the students, who are given “the full depth and breadth in what goes into electric vehicles,” Silvers added.

Last year, students completed the go-karts within one quarter; however, this year was different because of the COVID-19 pandemic and the school’s hybrid schedule.

“We built four go-karts across all the periods this year, so actually our students learned a new way to communicate digitally to their peers through Microsoft Teams,” Silvers said. “It was kind of a longer, drawn-out project in that sense.”

Students built everything from the frame to the wiring. And, once everything was installed, “the rubber finally met the road,” Silvers said.

“They get so upset at the things that are taking longer while building them,” Silvers said about the students. “Then they finally get it out for the first drive and they forget all the pains and they are so happy. There’s not a lot of people that can say they built a go-kart from the ground up, or one that takes 500 amps of electricity.”

Once the students test drive the karts, the class regroups to diagnose the problems, Silvers said, adding “there are wonderful learning experiences by learning from our mistakes.”

“[The students] take such ownership of the vehicles. They’ll fix them and get them back together for the next class,” he said. “We drive them, we break them, we fix them.”

Next year, Silvers said, will be “the keystone year” for the electric go-kart project. That’s because Silvers has two years of experience with the project, plus he plans to start manufacturing the kart frames at New Trier to not only save money, but also teach the students how to weld.

According to Boumstein, all of these opportunities in this class show how the transportation field means “you aren’t just working on a gas vehicle nowadays.”

“I think it’s really exciting; we are seeing a reemergence in the autos program,” Boumstein said. “We’re not just getting to know what’s under a hood; we are learning what’s going into the design in anything that moves. It’s really learning to understand how anything works.”