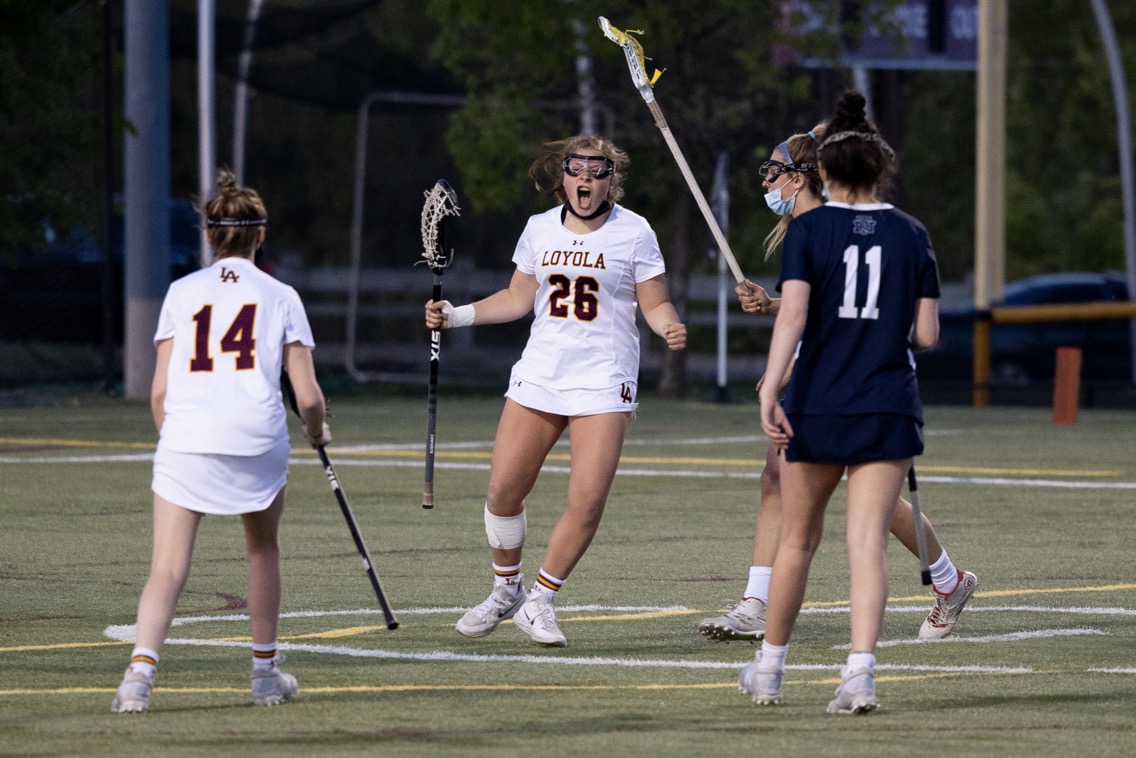 Loyola Academy senior Ellie Lazzaretto celebrates after scoring a goal during the Ramblers' 12-10 win over rival New Trier on Thursday, May 13, in Glenview. | Photos by Rob Lange/The Record North Shore

The Loyola Academy girls lacrosse team remained unbeaten with a come-from-behind victory over neighbor New Trier High School on Thursday, May 13, in Glenview.

The Ramblers edged the Trevians 12-10, earning their second win over New Trier this season. Loyola’s victory moved its season record to 11-0, while the loss was just New Trier’s second of the season — both of which have come against the Ramblers.

New Trier head coach Peter Collins said he thought the Trevians played well on the defensive end, which included a 12-save effort from goalie Kate Keller.

“When you’re playing a team that is as strong as Loyola, you have to play your best,” Collins said. “ … We really wanted to go out there and compete hard, and we thought our girls did. Loyola has a lot of momentum, a lot of motivation, and they are well coached. They have some kids that go hard.”

Collins said that he’s proud of the team’s ability to control the ball, win draws and also limit Loyola’s strengths. He added that Loyola took advantage of their fast- and slow-break situations and of the opportunities they created.

The Trevians did have some missed opportunities, which included a couple turnovers and offsides and a few shooting miscues, Collins said, adding that he’s hopeful they can build on the positives and learn from their mistakes.

“Last night was what it should be: a great competitive game with a neighborhood rival,” he said. “We really wanted to come out on top and I think now our kids know what it takes.”

Competing this season is definitely something both teams won’t take for granted after last year’s campaign was canceled because of the COVID-19 pandemic.

One of the Trevians’ team mottos this year is to make every moment matter.

“With COVID … we missed last year with the seniors, so our message is to play inspired, play for the seniors last year, play for your teammates and make every moment matter,” Collins said.

New Trier will almost certainly get another chance at the Ramblers in the state playoffs where the teams could square off in a sectional final game in June.

With the regular season winding down and playoffs on the horizon, the Trevians are preparing for a deep run and the hope they’ll be playing their best when it matters most. New Trier will rely on the leadership of Macy Zaban, Ella Huber and Alyce Smith to help guide the team there.

“The message always is every year that we’re trying to be playing our best in the playoffs and (also) just knowing what it takes to win close games and being mentally tough,” Collins said.

Girls lacrosse has only been an IHSA-governed sport for two seasons. New Trier is the reigning state champion, thanks to its title in 2019. In 2018, the inaugural IHSA season, Hinsdale Central topped New Trier in the title game.

The Ramblers own 12 state championships, including nine straight from 2009-2017, when the series was hosted by the Illinois High School Women’s Lacrosse Association. New Trier has five IHSWLA championships and finished second six times during Loyola’s nine-peat.