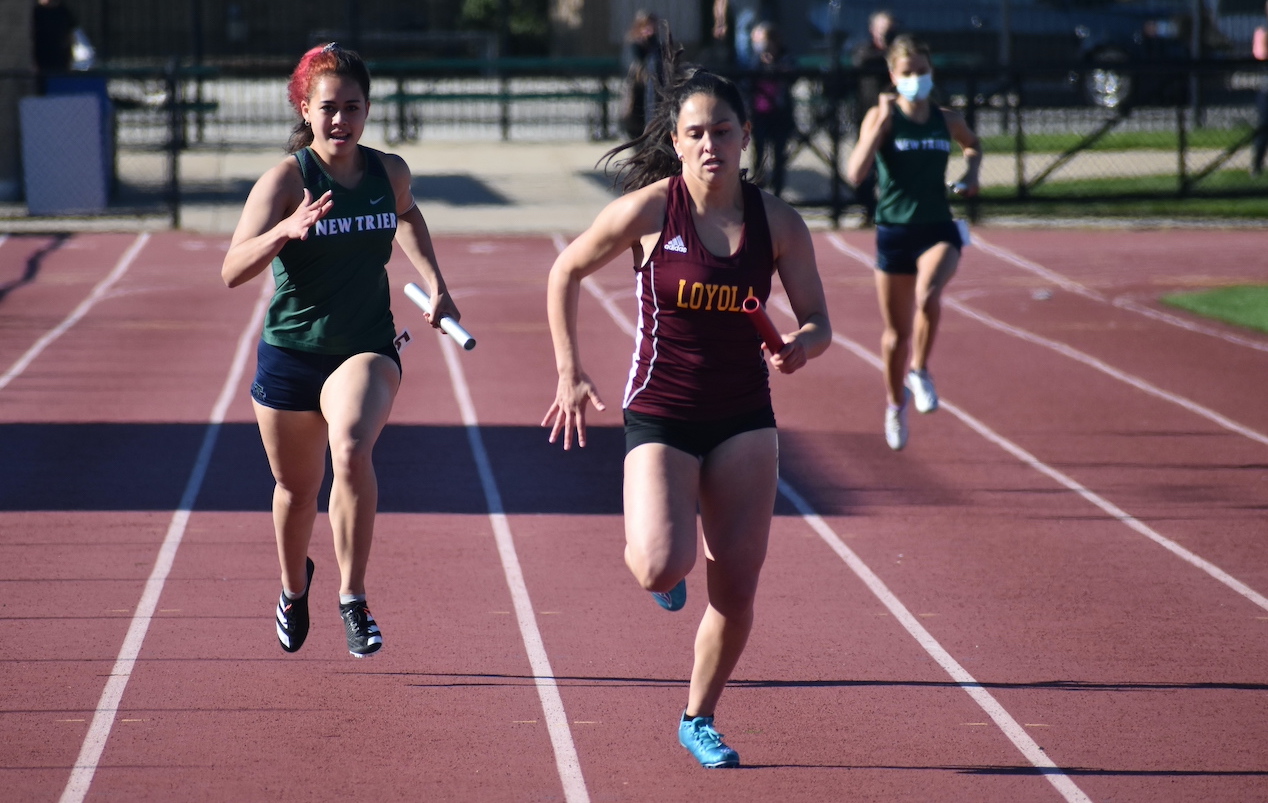 Loyola's Angelica Milkie is ahead of New Trier's Calista Chong and the field in the 4-by-200-meter relay Wednesday, May 12, in Wilmete. | Photos by Joe Coughlin/The Record North Shore

While they competed under the same bright sun Wednesday, May 12, in Wilmette, New Trier’s and Loyola’s track and field teams had different objectives.

The host Ramblers are still finding the best pieces to the 18-event puzzle that is a track and field meet.

Coach ChrisJon Simon said that the lack of an indoor season — which was scrapped because of COVID-19 and a condensed high school sports schedule — put his team in a hole it is still climbing out of.

“This is a meet that is really an extended practice,” he said. “We’re just trying to give girls opportunities in different events, find different relay teams and try to make it a positive.

“The indoor season is where you discover what girls are good at, especially freshmen. We really lost that discovery window.”

Five weeks into the season, the Ramblers are still scrambling to find the best relay combinations as well as their best options in field events, like the high jump.

And they have to act quickly with the Girls Catholic Athletic Conference meet on Tuesday, May 18, more than a week earlier than normal.

New Trier has more stable footing at this point.

While coach Bob Spangnoli said the Trevians have a few things to work out, he is impressed with what he’s seeing.

“Right now, we’re getting to the point where things are getting serious. … We have two weeks and we’re at the conference meet,” he said. “… I don’t think we’ve put our best product on the track or in the field yet … but I feel real good about our team this year. I think our depth is outstanding. I think when we put together all 18 events, I think we’re going to have a real good team and a real strong shot.”

Spagnoli said his team can score across the board, pointing to senior track stars Bridget Vitu and Emma Braband.

Vitu is a sprinter and jumper headed to Yale University who was part of the Trevs All-State 4-by-400-meter relay team that took third in 2018. Braband was a state champ in 2018, joining with three other Trevs to win the 4-by-800 relay. Braband also took eighth in the 400.

Kelly threw the shot 11.52 meters for the victory. Pheobe Pastor set a personal best in the high jump, winning at 4.11 meters, and Caroline Finnigan won the mile at 5 minutes 16 seconds.

Many of the Ramblers top entries did not compete Wednesday, including its prolific distance team, which includes sophomores Maeve Norman and Ellie Grammas and freshman Morgan Mackie. Simon also pointed out Nicole Cleland, a state qualifier in 2018 in the 4-by-400, as someone who will score for Loyola.

The Trevians have nearly identical goals with the hope of not leaving the state meet in Charleston empty-handed.

“When it’s all said and done, hopefully we have a busload of kids heading down to Charleston early in the morning on June 12,” Spagnoli said, “and hopefully we place as high as we can and bring home a bunch of hardware.”