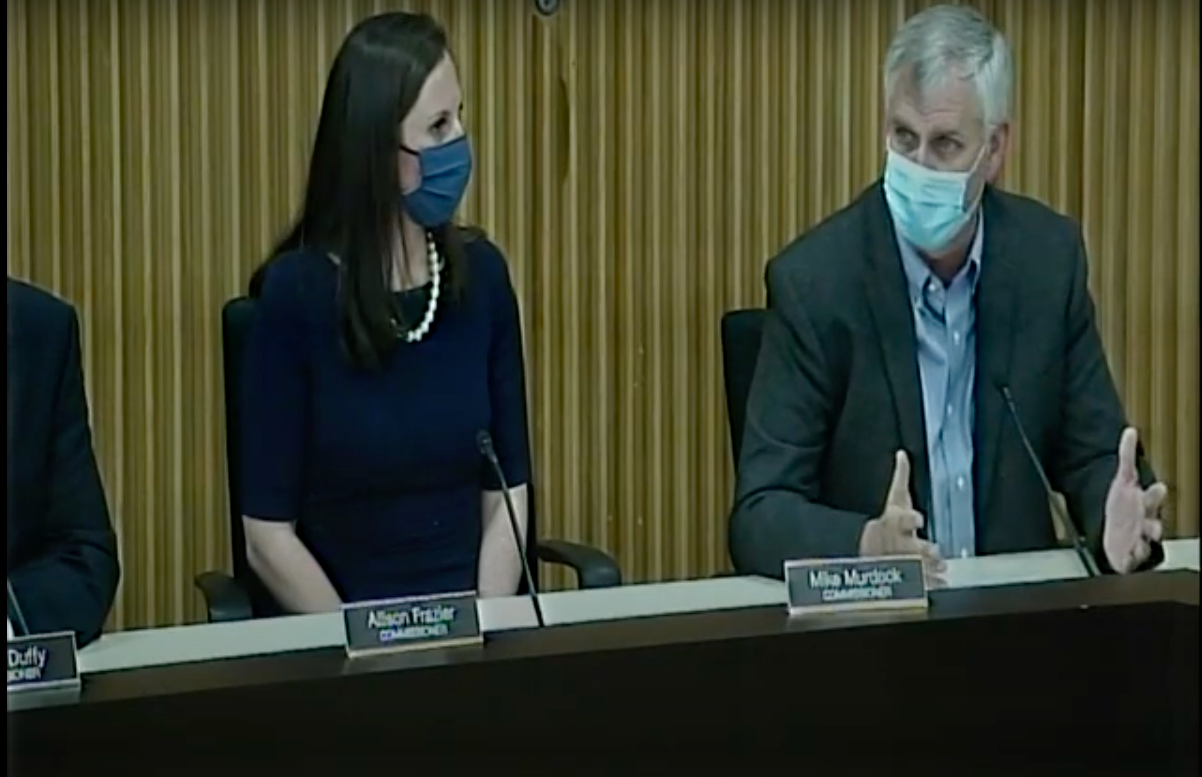 Board President Mike Murdock (right) speaks to his colleagues during the May 10 Park Board meeting. | Image from meeting recording

UPDATED: This story was updated on Friday, May 14, with comments from Park Board Vice President Julia Goebel.

A traditionally smooth ceremony was interrupted by an untraditional transition of power during the Wilmette Park Board of Commissioners meeting Monday evening, May 10.

After three commissioners were sworn in, the new board’s first order of business was to select its officers.

In a split vote for board president, commissioner Michael Murdock outgained the board’s vice president, Julia Goebel, by one vote.

It was the first time in at least 13 years that a Wilmette Park Board vice president who remained on the board did not ascend to board president, according to park district records. Former Commissioner Shelly Shelley was vice president in 2017-18 and never became president, because she did not seek reelection in 2019.

Commissioner Cecelia Clark pointed out the break from precedent prior to the vote.

Steve Wilson, the district’s executive director, said while the decision did break a pattern, it did not break any of the board’s by-laws.

After winning the presidency, Murdock said the Park Board has experienced “challenges” throughout the past two years and called the board “divided.”

“It is important for us to recognize that we do have some differences and that this is at this point a divided board,” he said at the meeting. “I really look at this as a challenge to bring this group together.”

In a followup email to The Record, Murdock doubled-down on his categorization of a divided board and touted his prior experience as a commissioner from 2009-2013. Murdock is now the only member of the Park Board who has served a full commissioner term.

“Because I have as much experience as the rest of the board combined, I believe I was the logical choice to lead,” he said. “But I respect that other opinions exist so our disagreements were more public (at Monday’s meeting). I look forward to the challenge of bringing this group together.”

Murdock is the only member of the Park Board who has served a full commissioner term.

Murdock said in an attempt to unite the board he was nominating Goebel to another term as vice president. The motion passed unanimously.

In a followup phone interview, Goebel told The Record that prior to the May 10 meeting she was aware of how the votes would fall and did not proactively seek the president position.

“I was surprised to be nominated,” she said. “I admire Cecelia and her conviction. It was clear to me ahead of time (the vote) was going to be in Mike’s favor. With that the case, I would be vice president. I was grateful for her support and conviction.”

During the meeting, Goebel thanked Clark and Allison Frazier, a newly elected board member, for the nomination and votes for president and said she looked forward to working with Murdock.

She backed up those thoughts by telling The Record that she is impressed by the different backgrounds and skills now featured on the Park Board, which for the first time in nearly 30 years seats more women than men.

“One of the things Mike and I have talked about is that we have good and different skills,” said Goebel, a marketing professional with a software and business background. “I don’t think we are a divided board. I would disagree with him on that. We want to have diversity of ideas, diversity of background and I love that we have people with really young children, children in middle school and high school and those who have grown and flown. We all experience the park district in different stages and different ways.”

The two other incoming commissioners, Kara Kosloskus and Patrick Duffy, each voted for Murdock, as did Commissioners Todd Shissler and Murdock.

Murdock was elected to the board in 2019 for his second nonconsecutive term as a Wilmette park commissioner.

During his first term from 2009-13, he became enveloped in controversy when in 2012 he joined a nonprofit seeking to manage the Wilmette Harbor after researching and discussing the same contract as a Wilmette Park Board commissioner, according to a Chicago Tribune story.

The article reports that Wilmette Park District counsel found no illegal activity with Murdock’s actions; though Murdock stepped down from the Parks and Recreation Committee and did not seek reelection in 2013.

One of his replacements on the Park Board that year was Bryan Abbott, who served two terms before finishing fourth out of nine candidates in a race for three seats in this spring’s election.

At the May 11 meeting, the board bid farewell to Abbott, as well as past presidents Amy Wolfe, who served two terms, and Gordon Anderson, who served one. Neither Wolfe nor Anderson ran for reelection.