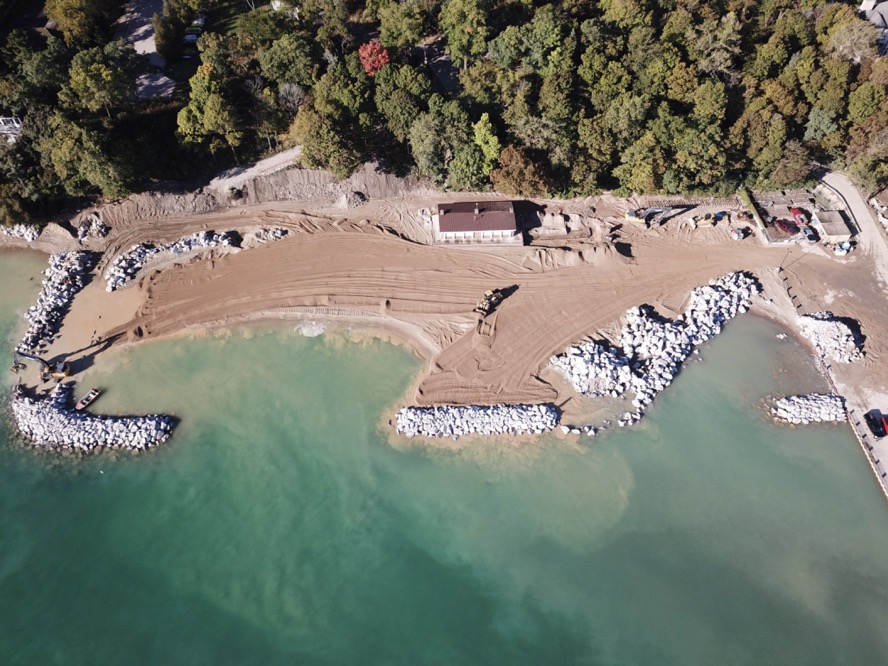 Winnetka's Lloyd Beach will reopen later this month after the park district opted to close it for all of the 2020 season to being restoration work. | Courtesy of Winnetka park district.

Locals will soon have the chance to enjoy the sights and sands of Winnetka’s Lloyd Beach again after it closed to the public for the entirety of the 2020 season.

The Winnetka Park District is planning a community party for 5:30 p.m. May 25 to celebrate the beach’s reopening and showcase millions of dollars worth of shoreline stabilization work.

Construction at Lloyd started in July of 2020 after the park district “had to close the beach … because it was unsafe” during the 2019 season, said Kelsey Raftery, the park district’s marketing and brand manager.

During the 2019 season, water levels at the beach were a foot below the boat launch, resulting in the beach’s parking lot flooding and officials deeming conditions unsafe anytime waves were above 1 foot — which Raftery estimated is roughly 50 percent of the time during the season.

Raftery said the park district had the opportunity to submit permits for the breakwater systems earlier than anticipated, which allowed work to progress more efficiently.

“We were planning to stay open for the 2020 season and then start the project at the end of the season, but because we knew we were going to be closed probably 50-75 percent of the time just because of the water levels being were they were, we decided to start the project a little earlier than originally planned,” Raftery said.

Starting work earlier and closing for the full 2020 season allowed the park district to reopen Lloyd this May, Raftery said, who noted that it wouldn’t have opened until halfway through the season if work started when first planned.

The majority of completed work at the beach focused on the installation of a new breakwater system. Last year, water levels decimated the boardwalk and the boat racks. The damage, paired with safety issues related to the water levels, rendered the beach “pretty much unusable.”

The new system relies on three different breakwater structures that are positioned across the beach.

Upward of 8,000 tons of sand were brought in, a method used to rebuild the beach back up to where it should be.

Bluff restoration work at the beach was also a priority. That included adding some basket walls to stabilize the bluff and planting native vegetation which will help to stabilize the soil to stop any more erosion in the future, Raftery said.

No additional “major work” is planned for this year, according to Raftery. There are additional improvements for the beach outlined in the park district’s Waterfront 2030 Plan but “nothing that (the park district) is going to be tackling in the short term.”

The total cost for work at Lloyd was approximately $5.1M, Raftery said. The project costs were paid “using a mix of revenues, reserves, and alternative revenue bonds,” she said.

The reopening party will feature a ribbon cutting to kick off the festivities, which will include live music from Winnetka’s own The Jacks, ice cream stations and swag giveaways. Photo-op stations and information tables detailing the work will also be set up.