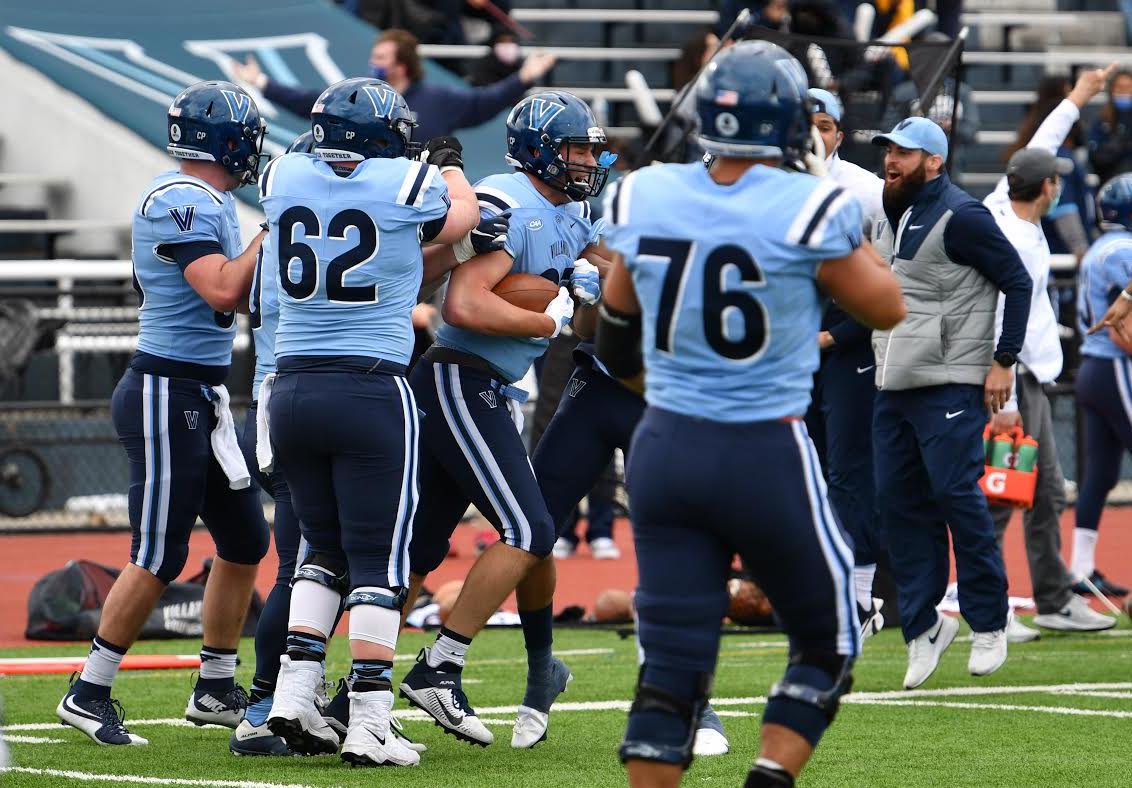 Charlie Gilroy (with football) is congratulated by teammates after the touchdown catch April 17. | Photos by Greg Carroccio/Sideline Photos

Graduate Charlie Gilroy was an essential part of what may be the sports play of the year when Villanova and Delaware took the field on April 17, as first reported locally by WGN.

Gilroy’s Wildcats had the ball and were down two touchdowns in the fourth quarter. On third and goal, ‘Nova’s quarterback Daniel Smith took the snap and rolled to the right, just as the play intended.

Gilroy, a tight end who started the play off tackle to the left, also headed right on the snap, dragging across the field and hoping to give Smith an open option at the goal line.

But a Delaware defender quickly reached Smith and started to pull him to the ground. As he was dragged to the group, Smith twisted in the air and while his arm rotated through, he lofted the ball toward the end zone.

“In the moment, I saw the guy blitzing (Smith) and I thought he was just going to take the sack or throw it away,” Gilroy said. “When the ball was in the air, it felt like it was up there for a long time. It made my job easy. I’m just happy I caught it.”

Despite the congestion in the end zone, Gilroy was the first to break toward the surprise pass. He leapt and locked the ball against his body for the touchdown.

The score brought Villanova to within seven points. While the Wildcats could not complete the comeback, the play is sure to live on in highlight reels and Gilroy’s memory.

It was not only an incredible play, but it was also his first collegiate touchdown.

“I knew it was pretty crazy (when it happened). It was pretty surreal in the moment,” he said. “ … It was pretty sad, too, losing the game; our season was over. So I had mixed emotions. I looked on my phone afterward and had friends and family hitting me up. … It was an experience I’ll never forget … and I was happy to be in the right spot at the right time.”

The play quickly circulated across social media and sports programs. The video has been viewed millions upon millions of times. It was a top play on “Sportscenter” and even drew the attention of Patrick Mahomes, known for making extraordinary throws himself for the NFL’s Kansas City Chiefs.

“Man that is some crazy stuff,” Mahomes tweeted atop the video.

Gilroy, who grew up on the border of Glenview and Wilmette, is a 2018 graduate of Loyola Academy who decided to join Villanova’s football program as a preferred walk-on.

After red-shirting his freshman year, Gilroy saw action in 10 games for the Wildcats in 2019, mostly as a blocking tight end; though, he did catch one pass for 3 yards.

Villanova pushed its season to the spring this school year, and Gilroy played in three of ‘Nova’s four games, including against Delaware in the season finale.

Gilroy will come home for the summer, but not for too long. He will return to Villanova after the Fourth of July to prepare for a back-to-normal fall season.

Though it will be a quick turnaround, Gilroy will be right where he wants to be.

“I couldn’t have made a better choice,” Gilroy said of attending Villanova. “The coaches are top-notch. It definitely has a family-like atmosphere. I love the university. All-around the people are so nice here. I’ll be sad to leave here this summer.”