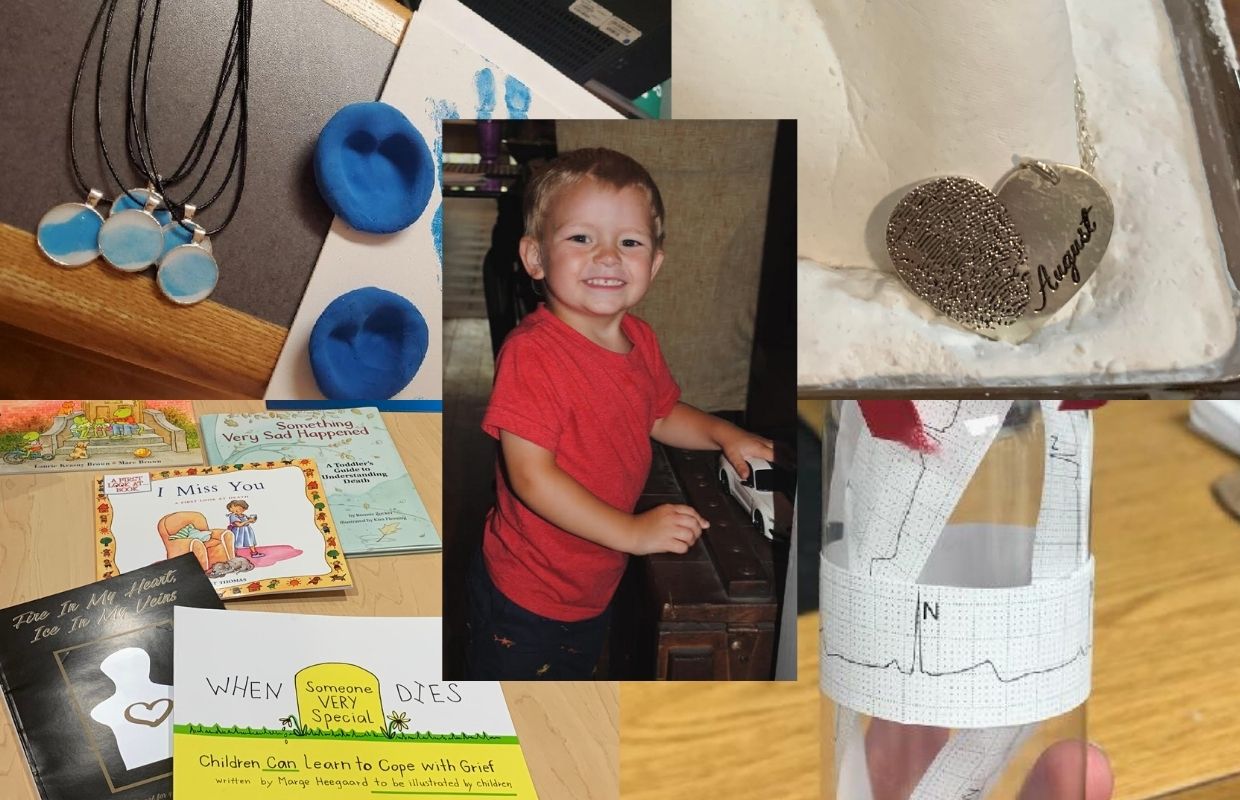 August Hoeppner, who died from a household accident in May of 2020, is the boy behind NorthShore University HealthSystem's August Box, which includes a variety of items and resources for grief-stricken parents. | Photos submitted

(Editor’s note: This story contains details about child death. It is a sensitive topic, and the article may be difficult to read. To support additional resources for families affected by child loss, you can donate to the August’s Boxes program through NorthShore University HealthSystem.)

Three-year-old August Hoeppner played in the mud the day he died.

The residual grunge formed a work of art, defining the thin creases and the shallow valleys on August’s feet. In the Hoeppner family, the playful leftovers are a badge of honor, a uniquely Hoeppner representation of joy, of a “no shoes” family culture.

When August died after an in-home accident on May 23, 2020, the hospital sheet laid upon his body left bare the badge of honor. The image is forever stowed in the mind of August’s mother, Zoe.

“I can remember that, not only while he was alive on that day, but I remember vividly in the ER, he’s dead and I’m holding him and his little feet are hanging out of the sheet, and I would love to have a picture of his feet,” Zoe said. “It’s just the last chance. And when you’re in the shock of the moment, you’re not thinking about (mementos).”

Thanks to August, grieving parents across the northern suburbs won’t have to.

August’s Boxes, which is available at all hospitals under NorthShore University HealthSystem, provide families enduring child loss with immediate and long-term emotional, financial and legal resources.

After August died, Zoe and Nick Hoeppner — his parents who are former Wilmette residents and St. Joseph and Francis Xavier parishioners — began communicating with the hospital system about its child-loss care program.

“First and foremost, you don’t know what is available or what to think about,” Zoe said of the moments around August’s death. “Your world has been turned upside down. …. Just like what are the options. How do I get access to bereavement resources, how do I talk to my kid … what are your rights. We include that in the box.”

The Chicago area is covered by nationally recognized children’s hospitals, such as Lurie’s, with multiple city locations, and Advocate in Des Plaines, a pediatrics partner of NorthShore. The landscape makes child deaths at NorthShore hospitals rarer still.

Katelyn Beyer, a child-life specialist, estimated that on average a child dies at a NorthShore hospital about once a month.

NorthShore University HealthSystems has long offered child-loss resources; however, most of them were housed at Evanston Hospital, the system’s pediatric hub, Beyer said, adding that resources were not immediately available at other hospitals at any given time.

August’s Boxes have changed that by streamlining the process, organizing the tangible resources and mobilizing the appropriate personnel.

“Even though we’re a well-established system, pediatric deaths are really rare and we didn’t have a standardized process for how to bring a big interprofessional team together to support a family,” said Dr. Bridget Wild, a pediatric hospitalist with NorthShore who was on hand for August’s death. “Times when a system is stressed, like during COVID, you realize that every time (child loss) happens we reinvent the wheel and make a lot of phone calls and wouldn’t it be better if we automatically dispatched an entire process.”

After an initial dialogue, the Hoeppners met with the team at NorthShore in December 2020, about seven months after August’s death.

They talked about the potential contents and objectives of an August Box, while the NorthShore team — which included Wild, Beyer, and Dr. Aimee Crow, another pediatric hospitalist — showed the Hoeppners resource materials they had already compiled, such as grief resources and books on how to talk with children who lost a sibling. August had two older sisters: Annemarie and Aubrey

Then they reviewed memory-making items that could be included to memorialize fingerprints, heartbeats or small body parts, like feet and hands.

All of this, of course, would cost money for a hospital system and community in the throes of a historic pandemic.

It wasn’t a problem.

“I don’t think they thought we were going to let all our friends know they were doing this and we’re going to raise $6,000 in 10 days. But that’s what happened,” said Zoe, who credited her Evanston neighbors, as well as the communities of St. Joseph and Francis Xavier and St. Joan of Arc.

NorthShore Foundation, the hospital system’s nonprofit arm, continues to fundraise for the August Box program, setting a goal of $15,000.

Wild is in charge of training the hospital system’s pediatric professionals to understand and deploy an August Box in reaction to a child trauma.

The box is more than its contents, though. The Hoeppners helped bolster NorthShore’s child-trauma response team. ER physicians and nurses always responded en masse to child trauma, but now, a hospital chaplain, a child-life specialist, hospitalist and more are also part of the response team.

The physical August Box is an 18-gallon container packed with memento-making kits to capture “the physicality” of a child, Beyer said. There are tiny scissors to snip a lock of hair, different color ink pads for fingerprinting, a glass bottle to hold heartbeat printouts, and clay molds for hands or feet.

It also contains the bereavement folder, which includes a variety of grief-related literature and resources, such as books for siblings and listings of funeral homes, support groups, mental-health professionals and, less obviously, legal rights.

Every child death in the state is reviewed by the Illinois DCFS, members of which visited the Hoeppner home at 1 a.m. the night after August’s death, Zoe said.

“It’s important to know what your rights are,” she said.

Bereavement photography is also part of the child trauma response, as NorthShore emergency staff were trained by a professional photographer. The physical gifts are not ideal for every grieving parent.

That’s beside the point, according to Zoe, who knows the anguish of not having the option.

“Some people don’t want that. It’s too painful,” she said, “ … but we don’t want them to miss the chance. There are so many things — because an August Box didn’t exist for us — that we didn’t get and we will never get.

“That proximity to life is the last chance you’ll have for lifelike interaction.”

The August Box program not only sparked fundamental change in the child-life response for day-of care but also for after-care.

Beyer said NorthShore solidifying that process was just as important as the immediate response.

“Research has shown grief is not just the day that your child dies. It’s every single day after that,” said Beyer, who with Crow spearheads day-of implementation of the August Box. “Everyone’s grief process is different. Why this is important is because we need to meet the family where they are at in that moment and follow them.

“Whoever is present that day, we want them to feel like they matter and their child mattered and whatever we can do to support them through this very difficult, tragic event we will do.”

To Zoe, that post-care is essential.

“Ultimately what we want, on your darkest, most despairing days, to know that you are not alone, that you are loved and your child is loved and that you are seen,” she said “Otherwise, it’s like impossible to survive.”

Zoe and Nick will never have those photos of August’s feet. But they have a mold of his hand and a pendant necklace engraved with his fingerprint.

Those items help the Hoeppner family every day, and August is busy helping others too.

“A lot has been accomplished and a lot is still happening,” Zoe said. “(The August Box) is now in the (electronic medical system), which is a really awesome thing. Our son’s legacy is in there.”

To donate to the August’s Boxes program, visit Foundation.northshore.org/AugustsBoxes.