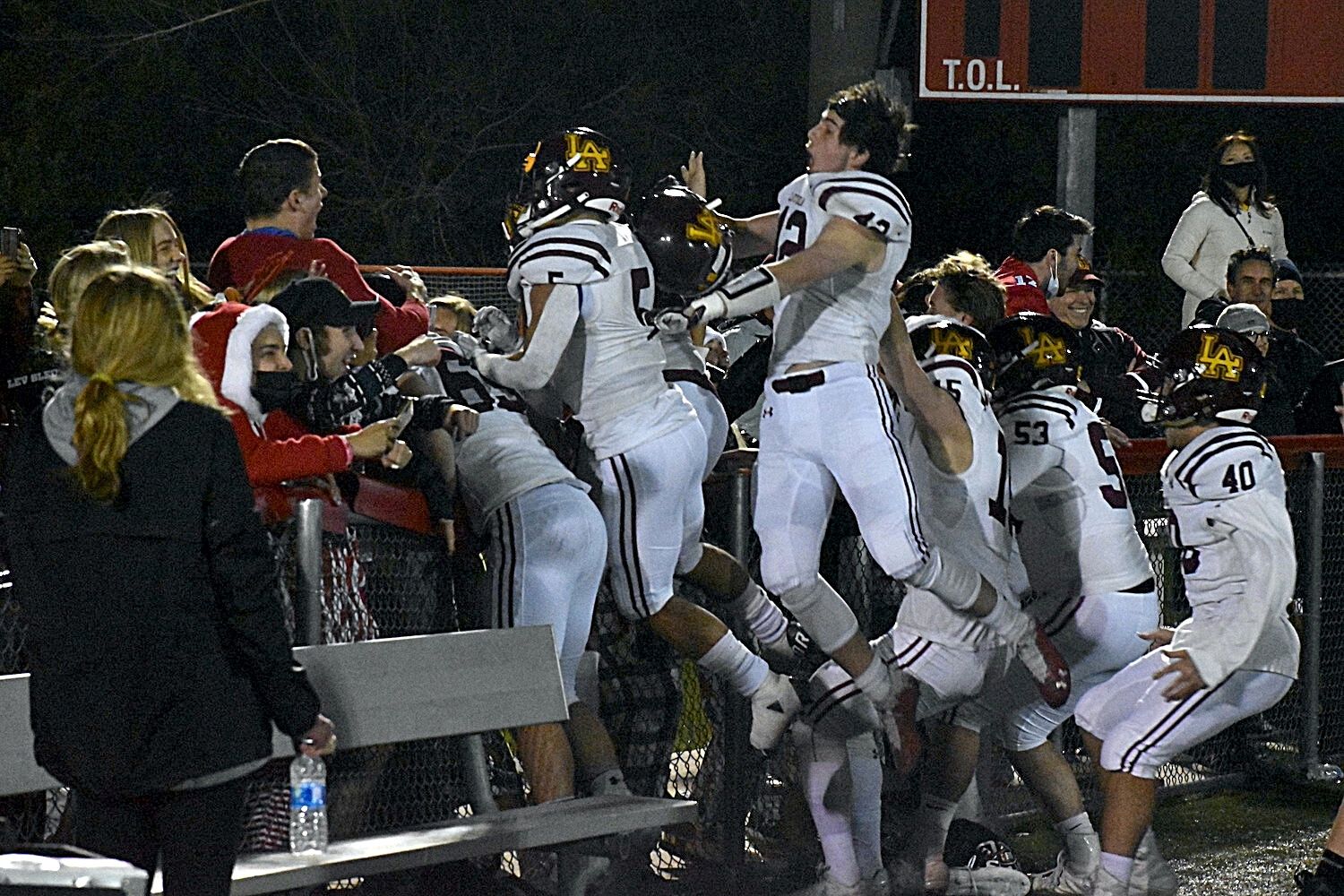 The Ramblers rush their fans after their 43-14 victory over host Marist Friday, April 23, in Chicago. | Photos by Joe Coughlin/The Record North Shore

Loyola Academy got the Marist chip off its shoulder.

The Ramblers traveled to Chicago’s far South Side on Friday, April 23, and ended the football season with a perfect record by defeating their 2019 nemesis, 43-14, avenging losses in both their last regular-season game that fall and again in the IHSA Class 8A quarterfinals.

Compounding the insult, both of those season-spoiling Marist conquests came at Loyola’s Hoerster Field.

But this season Loyola was unstoppable.

“There’s no doubt you’re one of the best teams in Loyola’s history,” Ramblers coach John Holecek told his players after they ended the unconventional COVID-19 abbreviated 2021 season with a 6-0 record with all of the conquests coming against teams ranked by local media. “We’ll never know if you are the best but you’re always going to be in the conversation.

“You believed all through the summer and fall. You seniors are one of the best classes I’ve ever had the privilege to coach.”

CHECK OUT A PHOTO GALLERY FROM THE RAMBLERS’ VICTORY

Running back Vaughn Pemberton concluded his superlative senior season by playing the best game of his career. He rushed for five touchdowns on plays covering 1 and 79 yards in the first quarter, 18 yards in the second quarter, 1 yard in the third quarter and 21 yards in the fourth quarter and ran for a two-point conversion after his fourth TD.

Joining in the scoring were junior Marco Maldonado, who got the Ramblers’ other touchdown on a 25-yard run in the fourth quarter, and senior Nate Van Zelst, who kicked five extra points.

Pemberton’s spree that saw him gain 239 yards in 23 carries gave him 903 yards rushing for the season and, coupled with his pass reception yardage, 1,009 total yards. He was by far the Ramblers’ leading scorer with 96 points — 15 touchdowns and three 2-point conversions.

“He’s a once-in-a-generation back,” Holecek said. “I’ve never seen a back like that (who combines both great power with exceptional breakaway ability).”

Pemberton said the 2019 losses to Marist helped bring out the best in him.

“I woke up mad yesterday thinking about them and I was mad all day today until I put the pads on,” said the Ball State recruit, grinning from ear to ear.

The final score was somewhat misleading because the Red Hawks (4-2) put up a stubborn fight in the first half that ended with the Ramblers leading 21-14.

“We were well aware of what we had to do but sometimes that’s easier said than done,” Holecek said. “They’re dangerous. They have weapons and they have speed.”

The most menacing of those weapons was agile and resourceful junior quarterback Dontrell Jackson Jr., who completed 18 of 31 passes for 285 yards and rushed 10 times for 43 yards. He passed for the Red Hawks’ first TD and ran for their second.

Pemberton’s first touchdown that came with 86 seconds to play in the first quarter was answered 36 seconds later by a 25-yard TD pass from Jackson to senior wide receiver Matt Rolek.

In the second quarter Pemberton’s longest run of the day enabled the Ramblers to regain the lead but later in the quarter Jackson retaliated with a 10-yard scoring run.

Pemberton refused to let the Red Hawks go to their dressing room at intermission with momentum.

On the Ramblers’ next possession they drove 65 yards in five plays to reclaim the lead when Pemberton took the ball to the end zone from 18 yards out. The big play in the drive was a 34-yard pass from senior quarterback JT Thomas to junior wide receiver Roger Simon.

With 1:28 to play in the half senior defensive back Artis Benjamin made one of the most important plays of the game, an end-zone interception of Jackson’s pass in a first-and-goal situation from the Loyola 7.

According to Loyola senior linebacker Braden Mullen, “At halftime we said: ‘If we shut them out the rest of the way we win the game.’ Our goal was not to lose a game and we made it happen.

“A lot of us were playing as juniors last season when we lost those games to them so that was motivation. We also got some texts this week from last year’s seniors who are now in college.”

The Ramblers’ defense that gave up only 41 points this season — fewer than 7 points per game — rose to the occasion in the second half, thwarting the Red Hawks’ hopes of making a comeback.

In the forefront were Mullen and senior safety John Sullivan with interceptions and senior defensive back Marty Auer with a fumble recovery off a Brandon Svets strip.

Holecek also praised the performance of senior offensive lineman Jack Mathes, who entered the game in the first quarter when fellow senior Will Livingston had to leave because of an injury.

“Jack got his moment, coming in for a big All-Star type guy who is a college prospect, and absolutely shone,” the Loyola coach raved. “It was a solid performance, an awesome performance by Jack playing against their big defensive linemen.”

“I was kind of nervous when I came in but as the game progressed I got the right mindset,” Mathes said. “Our whole team came together.”

Marist’s only other loss came in its third game of the season against defending Class 7A champion Mount Carmel (24-21).

COVID-19 curtailed their season but the pandemic couldn’t diminish what they accomplished.