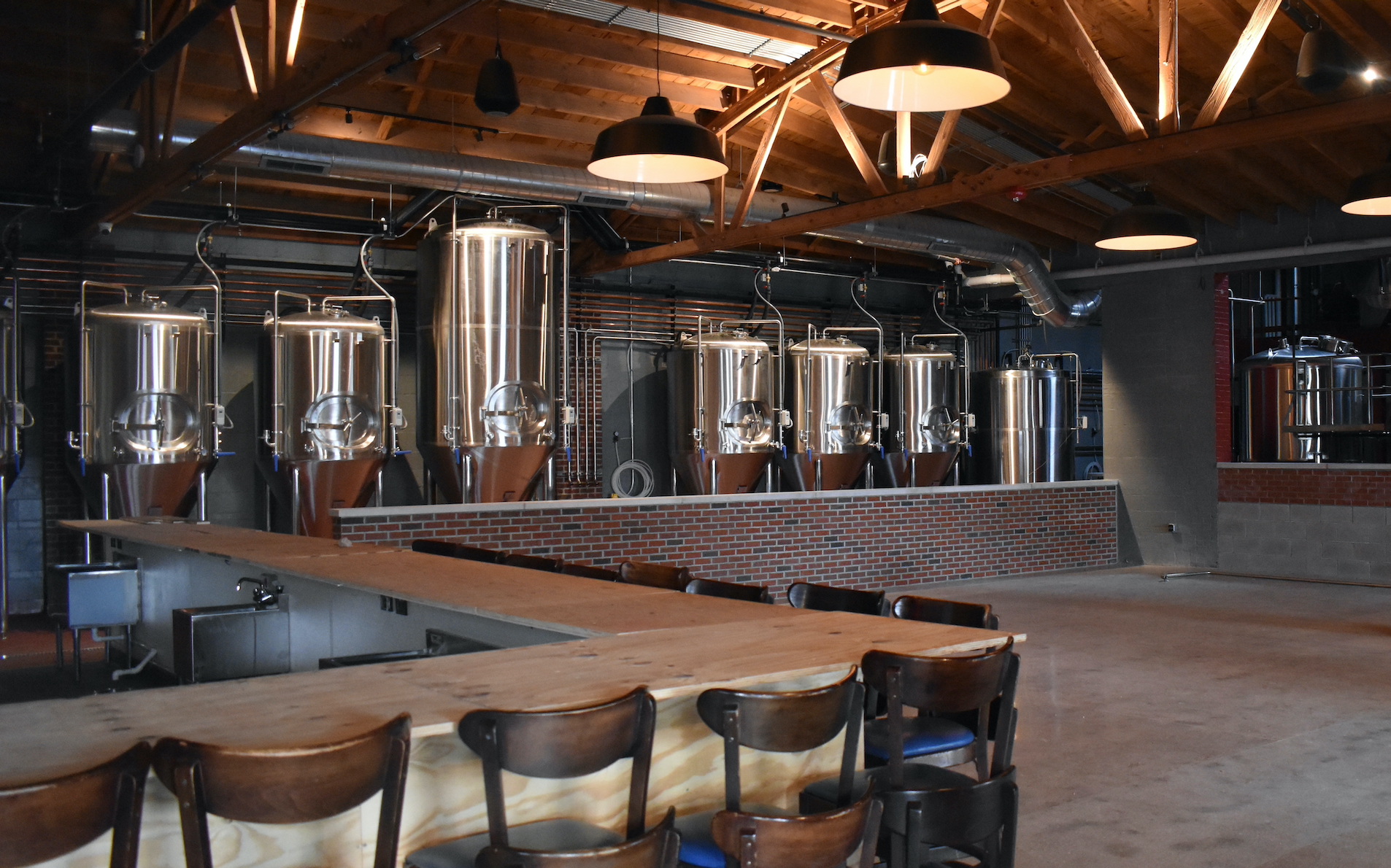 Much of the brewing equipment at Double Clutch Brewing in Evanston is visible to customers. | Photos by Joe Coughlin/The Record

Your local brew is coming right up.

Double Clutch Brewing — the latest brainchild of restaurant group CCH Management — is in the final stages of its buildout at 2121 Ashland Ave., Evanston, and hopes to open its doors to the public this summer.

Plans for the micro brewery bubbled to the surface in 2019, when Wilmette’s Mike Chookaszian and his colleagues decided to convert their building into a brewpub and event space.

Two years later, Double Clutch Brewing looks the part — from the two-tone facade to the exposed brewing equipment to the established event spaces

All they need is the beer.

“We’re about 30 days out from our first brew,” said Josh Schonfeld, the chief operating officer and a partner with CCH. “Once we’re able to start brewing, we’re hoping within six to eight weeks (to open).”

Schonfeld also helps run Wilmette restaurants Pescadero Seafood and Oyster Bar and Napolita Pizzeria and Wine Bar, both owned by CCH. Double Clutch will be CCH’s ninth restaurant, and Pescadaro’s second location in Chicago’s Lakeview community will be its 10th.

The open brewery will compete against fellow Evanston breweries Temperance and Sketchbook, which also has a location in Skokie, as well as Glenview spots Macushla and Ten Ninety.

The name Double Clutch is an homage to antique cars, which will always be on display inside the three large garage-style doors at the brewery.

The classic-car arrangement can be modified, too, one of the perks for guests for event organizers who may want to match colors or styles to the event.

Schonfeld said Double Clutch can host up to 500 people or it can be broken down into different spaces for smaller events. He added that Double Clutch is ready for events of all sizes from weddings and corporate gatherings to birthday parties and bah mitzvahs.

“There’s nothing like it on the North Shore,” Schonfeld said. “… We’re very excited to bring something we’ve never really done before, but the event part of it is really going to be unique.”

On tap, Double Clutch will pour a variety of beers, but most will be of German influence, Schonfeld said — think pilsner, Kolsch, witbier, hefeweizen and more.

“We’ll have some others, stouts, IPAs, but the beers will predominantly be Bavarian influence,” he said.

That influence will carry over into the full-service kitchen. Schonfeld described the menu as featuring “American fare with a Bavarian twist,” which means plenty of bar-friendly snacks and burgers to go with bratwurst, sausage and housemade beer cheese, among other items.

“It will be a very friendly, beautiful event space with great beers and great food, great atmosphere, antique cars,” Schonfeld said. “Also, a very welcoming place to come after a long day of work, try different beers, have some snacks and be social.”